Estimates peg the legal industry to be worth $300 billion a year, making it a huge pie with plenty of slices to go around.

And yet, the law has remained largely untouched by technology in the past few decades. That’s because most legal content (statutes, cases, briefs, and so on) is scattered in university law libraries or locked up by legal conglomerates, like WestLaw and LexisNexis. Indeed, pushing the boundaries of legal practice is a far more challenging prospect than building a social media or photo-sharing application.

But that picture is slowly changing, with investors seeing an opportunity to market new products to young and tech-savvy lawyers. A start-up called Ravel Law exclusively disclosed to VentureBeat that it has raised $8.1 million in funding today led by New Enterprise Associates (NEA) and North Bridge Venture Partners, with participation from The Experiment Fund and Work-Bench. NEA’s Patrick Chung will join the startup’s board of directors, along with North Bridge partner Jonathan Heiliger, who served as Facebook’s vice president of technology operations from 2007 to 2011.

“Thousands of new law school grads are recruited into thousands of law firms every year, and they are tasked with research,” said Chung, a Palo Alto, Calif.-based partner at NEA, a venture firm with $2.6 billion under management. “These young lawyers grew up with Facebook and are glued to a smartphone, so to force them to use antiquated products at work is unnatural.”

Chung, who received a joint law and business degree from Harvard, doesn’t often come across legal-tech entrepreneurs. But when Stanford law graduates Daniel Lewis and Nik Reed walked into his office to present a prototype for Ravel Law, Chung was immediately impressed. “This is an enormous industry that hasn’t experienced much innovation for decades. It’s exciting,” he said.

Ravel Law is essentially a new data-visualization product that helps lawyers sort through information. “We wanted to build a tool that could help lawyers deal with an avalanche of information,” Lewis said by phone. Lewis hails from a family of lawyers, and noticed at an early age that most legal technology is archaic.

MORE: Meet the startups that are giving everyone affordable access to justice 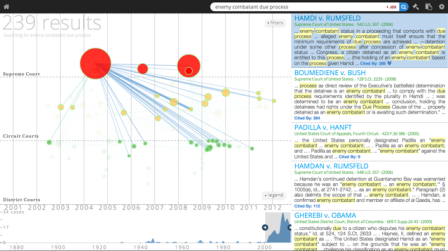 Above: A screenshot from Ravel Law

Similarly to the Pulse News app (acquired by LinkedIn) and the nonprofit MiracleFeet, Ravel’s cofounders developed the first version of their service at the Stanford Graduate School of Design, also known as the “d.school.” They enrolled in a class called “LaunchPad,” which encourages students to forgo computer screens and spreadsheets and focus on people.

During class, the founders teamed up with Stanford engineering students to build a tool that could sift through millions of legal documents in seconds and identify insights. This process, which paralegals and junior lawyers usually perform, requires hundreds of hours of painstaking research. Ravel Law will then present its insights in a nifty data visualization. This data comes from publicly available sources, although my prediction is that Ravel will partner with law schools to increase its stores of information.

According to Lewis, lawyers spend roughly 30 percent of their time doing research, which they typically bill to a client. The founders hope that their tool will help lawyers invest more of their time into winning the case — rather than leafing through documents. Ravel will likely have a far easier time pitching their service to solo practitioners and independent legal shops, which are competing with the traditional white shoe law firms. The smaller firms are increasingly under pressure to offer competitive rates, and explore how new technology can expedite legal processes.

Ravel Law’s team is still exploring pricing models, which will vary based on the size of the firm.

What’s unique about Ravel is that the tool is designed to unearth the cases with historic precedent and the outliers. “Most legal search programs will show you 10 or 20 cases,” said Reed. “But sometimes the answer you need is part of a larger story [and] a visual map can help you see the data in a new way.”