There are now 24 billion-dollar companies in the sharing or collaborative economy. This is up from 13 in 2014, reflecting a jaw dropping 71% increase and about one new addition every month. 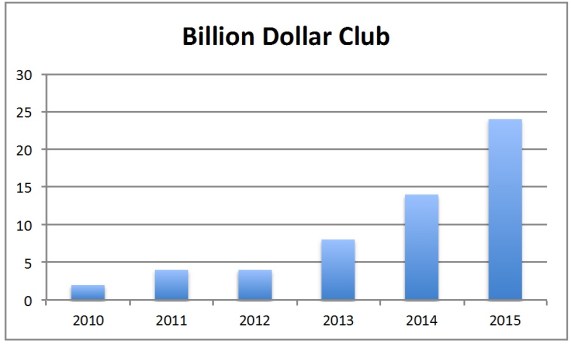 The size of the sharing economy billion-dollar club has almost doubled every year since 2012. New additions in 2015 can be found across the collaborative economy landscape. Fintech has seen four new additions (Prosper, Transferwise, Funding Curcle, and Jimubox), while transportation services saw three new companies (Yidao Yongche, BlablaCar, and Grab Taxi). 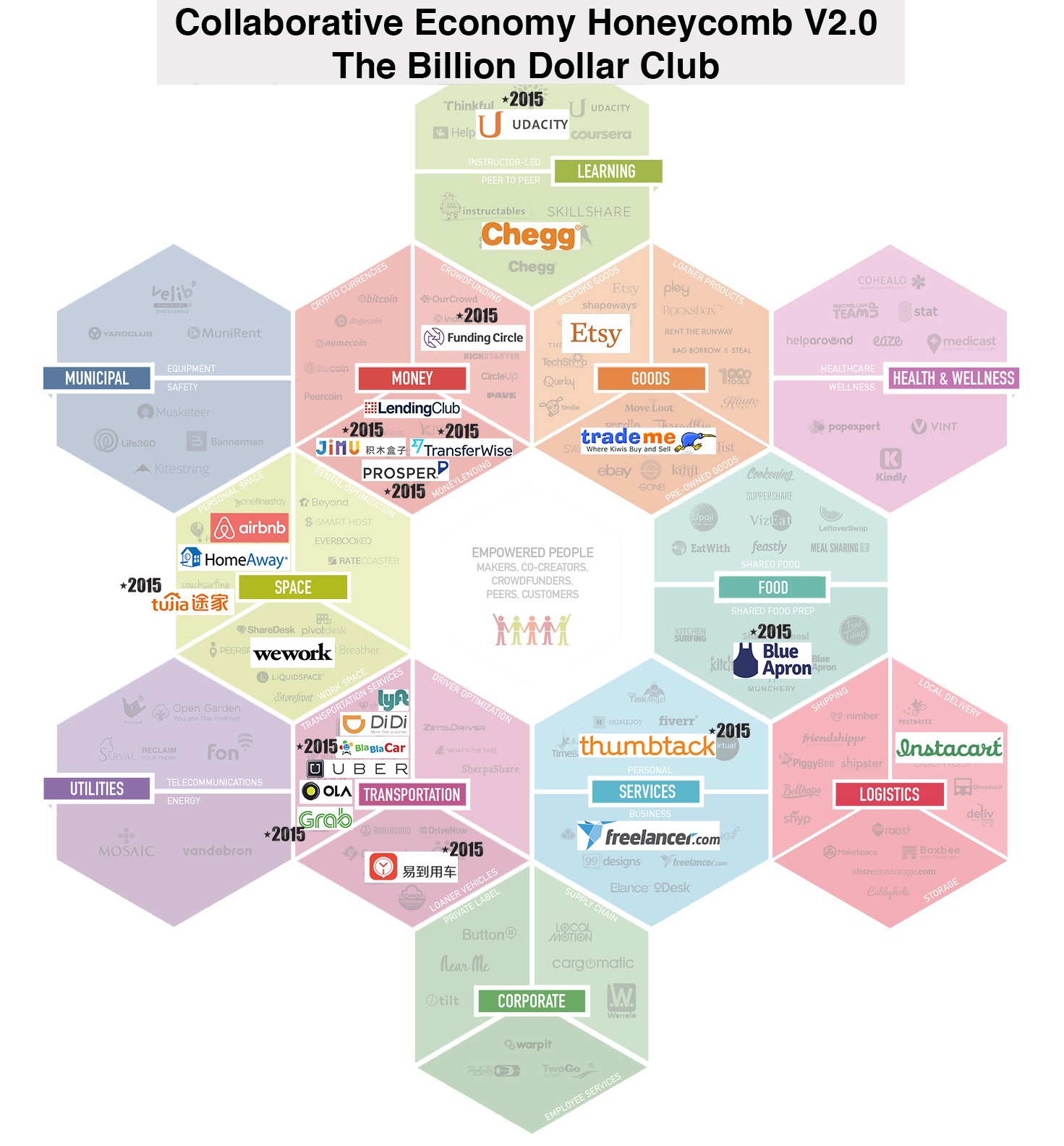 The aggregate valuation of all billion-dollar sharing economy companies is now $140 billion. Uber has the biggest market cap, with $51 billion; AirBnB is second with $25 billion in valuation, followed by Chinese company Didi Chuxing.

2015 saw three exits in the club: two acquisitions (Homeaway acquired by Expedia, and Yidao Yongche acquired by Chinese Conglomerate LeTV) and 1 IPO (Etsy). If we remove the six M&A and public companies from the list, the number left — the sharing economy unicorns — is now 18 compared to 10 in 2014. And all of them are very young — less than seven years old.

Seven companies on the list were already unicorns in 2014. With the exception of Instacart, all raised significant amounts of funding in 2015, totaling $12.8 billion  (comprising 80% of the funding raised by the billion-dollar club in 2015). The combined market cap of the unicorns increased 2.7x, which is very aggressive for a portfolio of companies that size.

The market cap of these seven existing unicorns now makes up more than 83% of the entire sharing economy billion-dollar club’s market cap.

The sharing economy billion-dollar club is facing a few challenges, the most concerning of which is how public companies are performing in the stock market. In aggregate, sharing economy public companies lost 44% of their market cap in 2015 — down to $9.6 billion. This drop was due to the IPOs of two once high-flying unicorns, Etsy and Lending Club, which lost two-thirds of their values in less than a year.

It is not uncommon to see tech companies lose two-thirds of their value during the first year and rebound later. Facebook is the most well known example, where the company went down from $38 per share to $17 only to rebound two years later to $115. So the jury is still out for Etsy and Lending Club, and we will watch them carefully in 2016.

Fundraising was another problem the public companies faced last year. Compared to the $13 billion raised by the unicorns in the private market in 2015, public companies were only able to raise $274 million during the same period

Discrepancies between private and public companies create a financing risk

A major area of concern for the unicorns in 2016 is that the current public and M&A performance of their peers undermines the fundamentals of a very high priced unicorn round. Usually, investors want to buy significant holdings in a private transaction because they can’t build the same holding at a reasonable price after the IPO. With public companies such as Etsy or Lending Club trading below the level of their last private equity rounds, investors can now buy those companies at an attractive price in the public market, making it less appealing to invest in a private round of financing before the IPO.

Second, the protection mechanisms used by fund managers to get more shares in case of lower scenarios are based on IPO price. Most investors who invested in a company before an IPO are locked up for 12 to 18 months so if companies exit at a significant step up at the time of IPO but then falter, as they’ve been doing (with the exception of Trade Me), the protection isn’t working anymore.

With financing risks having increased that much, most venture capitalists don’t want to have a portfolio company that needs cash and has to go fundraising. So we can expect a strong push from them to reduce spending to last through a possible drought — or better yet, to get to cash flow break-even. M&As could also be an option to consider if there are no other viable medium term alternatives.

In the meantime, we will keep watching existing public companies as well as the newest IPOs to see if the pattern we have seen in 2015 continues or if it was due to a misperception of the quality of sharing economy unicorns in the eyes of the public market.

Note: The billion-dollar club includes all companies public private or acquired through M&A that have been valued at one point more than $1 billion. Companies that are not valued over $1 billion anymore are kept on the list for the purposes of tracking. Members of the sharing economy billion-dollar club include Uber (CA), Didi Chuxing (China), AirBnB (CA), Lyft (CA), Ola (India), Lending Club (CA), and Wework, but also Etsy, Chegg, and Freelancer, whose market cap is less than $1 billion as of today.

Jeremiah Owyang is founder of Crowd Companies, which helps big companies with the collaborative economy. You can track his 290+ company Collaborative Economy Landscape on VBProfiles.com