If you’re not getting enough sleep, you can blame it on those blue light-emitting diodes (LEDs) that are replacing incandescent light bulbs everywhere. But Soraa wants to protect your eyes and your sleep cycle with violet LEDs that give you the full spectrum of colors.

Fremont, California-based Soraa has been making high-end LED bulbs for five years, but today the company is launching two consumer bulbs, dubbed Soraa Radiant and Soraa Healthy. They’re the byproduct of years of research by Shuji Nakamura, father of the modern LED light and founder of Soraa. 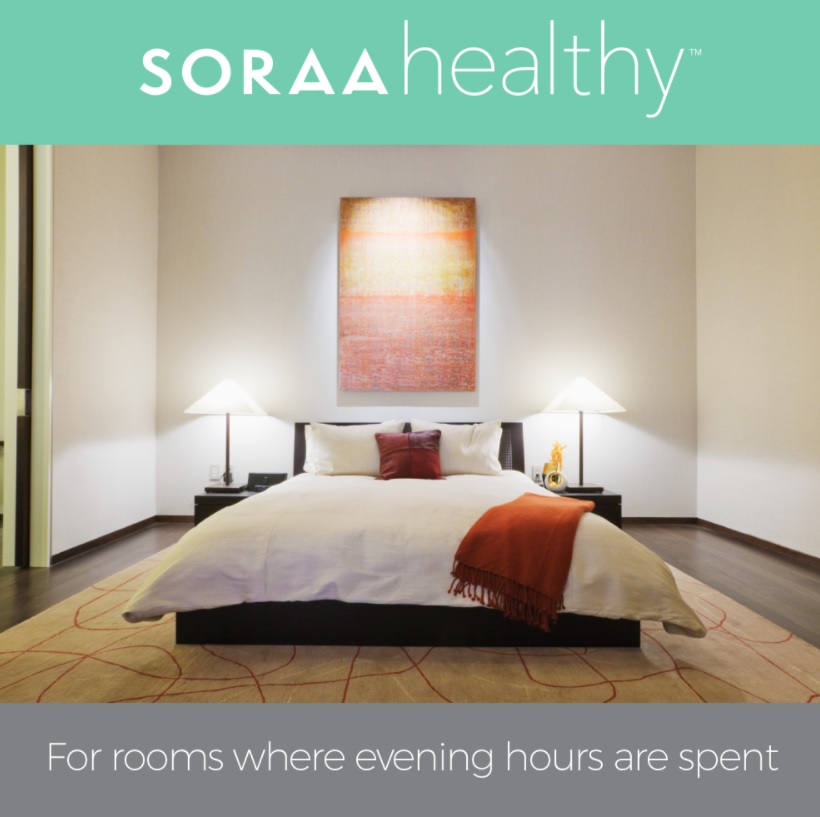 Above: Soraa Healthy lights could help you sleep better.

In the past couple of decades, blue LEDs have been slowly taking over, as their price has fallen below incandescent bulbs and their energy-saving features have become widely known. But blue LEDs also have a downside. They cannot reproduce the entire color spectrum, so they aren’t as good at illuminating vibrant colors. On top of that, blue LEDs can inhibit the body’s production of melatonin, a hormone that enables you to fall asleep more easily.

Nakamura was the inventor of the blue LEDs used for lighting in the 1990s, and in 2014 he won the Nobel Prize for physics. In 2008, he started Soraa to finish the work he had started. In 2012, the company began shipping its first violet LEDs, which were expensive back then and so were mainly used in high-end applications such as lighting for museums, hotels, galleries, historical buildings, and luxury retailers.

Now Soraa has been able to bring down the costs. The Soraa Radiant bulbs will sell for $13.95 each, while the Soraa Healthy bulbs will sell for $18.95. That’s more expensive than a blue LED, where you might spend $10 for a half-dozen bulbs. But it’s also healthier, said T.J. Grewal, chief product officer at Soraa, in an interview with VentureBeat. 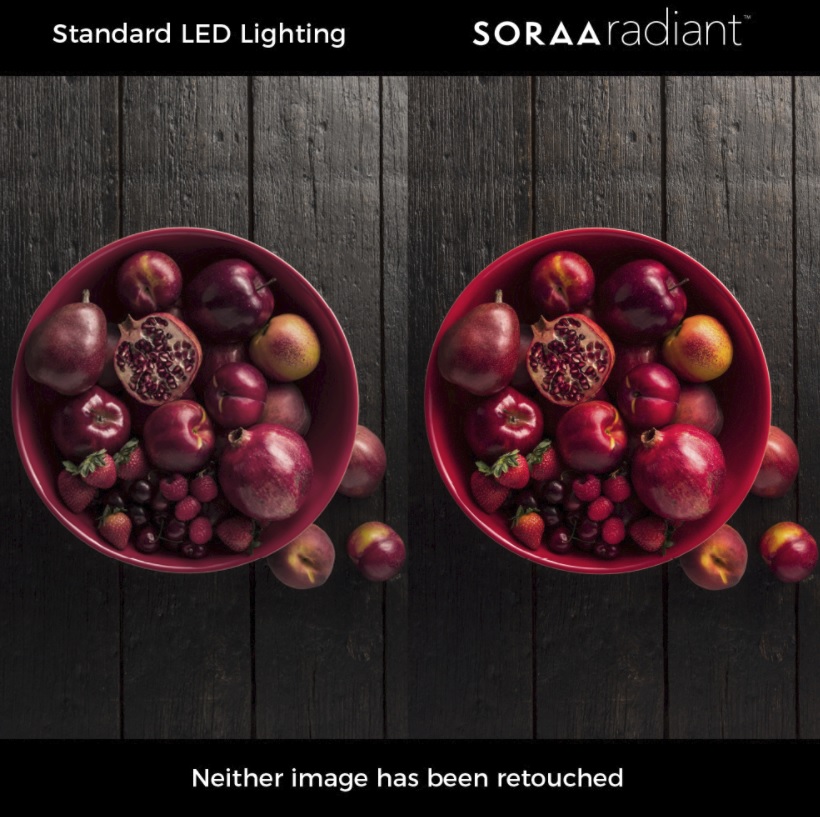 “Blue LEDs have replaced incandescents and saved energy,” Grewal said. “But the downside is the light isn’t giving you the full color spectrum. And it inhibits your sleep. Our lights reinforce your sleep cycle.”

Soraa Radiant is a full-spectrum bulb that will give you “museum-quality light in your home,” Grewal said. The bulb reproduces sunlight as closely as possible, which means red colors will look more vibrant and skin tones more attractive. The white light from a violet LED is also more pure, and shades of white light become more visible.

Colors produced with standard blue LEDs, by contrast, have gaps, because phosphorus filters put on the blue LEDs can’t really simulate sunlight’s effects. Standard LEDs have an R9 value below 10 percent and an RW of zero (those are lighting quality terms). Soraa Radiant LED bulbs create light with an R9 value of 95 percent and an RW value of 100 percent.

Carli Lloyd, captain of the U.S. women’s national soccer team, said in an interview that she has always been diligent about her sleep and that she needs about nine hours of sleep.

“I need that to be sharp on the field and quicker than my opponents,” Lloyd said. “The thought is to put the Soraa light in your bedroom. I’m in the process of getting a new home with my husband. We are researching bulbs, and this is the best company to be affiliated with.” 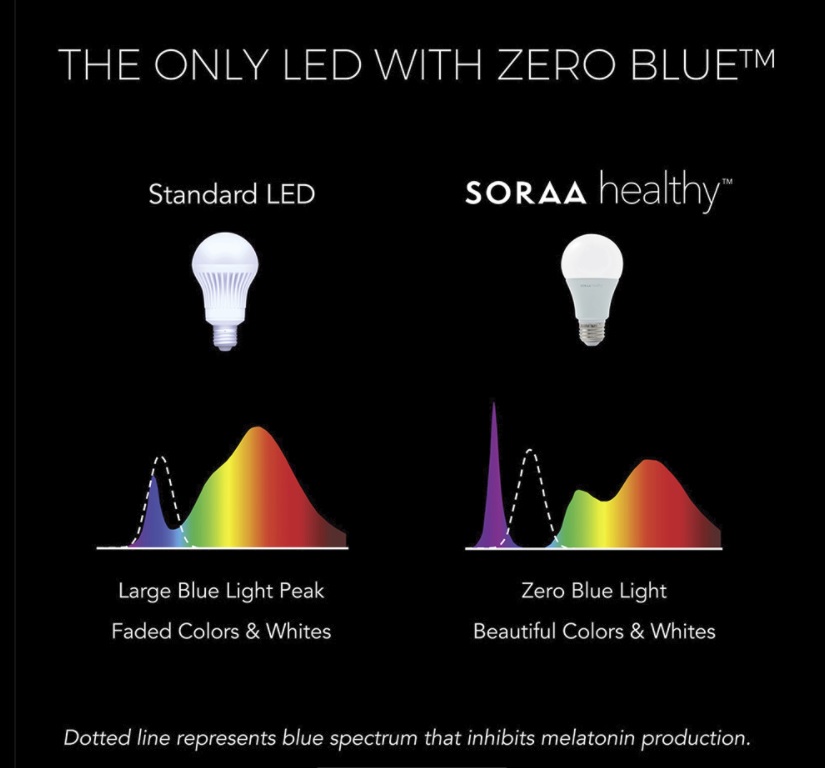 Above: Soraa has done research into lighting technology.

Meanwhile, Soraa Healthy LED bulbs have zero blue light. The invisible blue light in sunlight is like a wake-up call in the morning. It triggers your body to wake up. At night, when there is no light, your body produces melatonin, preparing you for sleep. The natural hormone regulates your sleep and wake cycles. When blue light disappears and melatonin levels rise, we become sleepy. 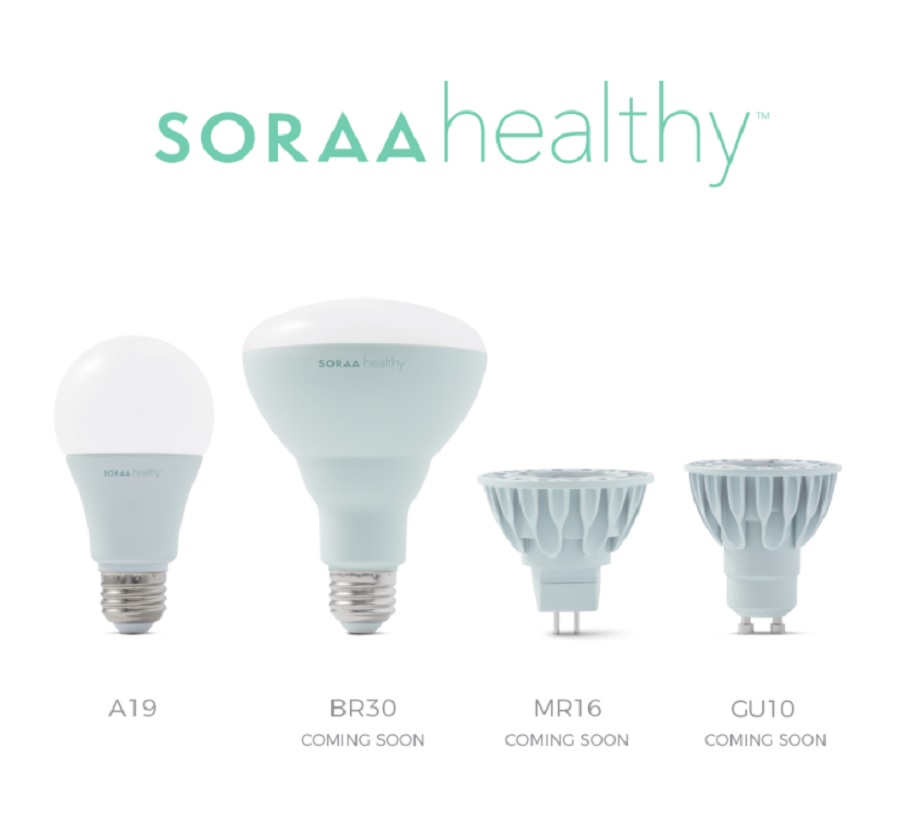 Soraa manufactures its own bulbs with proprietary LEDs. They are fully dimmable, and they don’t produce any buzzing noise. In addition, Soraa light does not produce the stroboscopic effect that has been shown to cause headaches, eyestrain, and fatigue, Grewal said. The bulbs are available on Soraa‘s site and on Amazon.

“Your lights shouldn’t do you harm,” Grewal said. “It’s hard to have a good sleep regimen without the right lighting.”