Startup valuations are a combination of science, smoke and mirrors, and hubris.

Median pre-money valuations have been increasing since 2009, “the depths of the financial crises.” This rise is the most pronounced in later stage companies, that have raised at least a Series D round of financing.

Seed round financings are also ballooning upwards –valuations for seed-stage companies has increased by 63% since 2008, averaging $5.3 million.

The cost of founding a startup is lower than ever before. The volume and amount of angel investing is also sweeping upwards, and the amount of seed investments has increased dramatically over the past few years.

Pitchbook said these trends are exacerbating the mythical “Series A crunch.” High seed-stage valuations are making it difficult for startups to raise Series A rounds, because seed investors want to see an appreciation of their investment, while A round investors view the seed round valuations as “unduly inflated.”

Series A round valuations are averaging $9.2 million, increasing at a modest rate of 23 percent.

Series B rounds, in contrast, are the one area of venture capital where the proportion of uprounds has contracted from 2012, although they still comprise 71% of Series B financings. The median B round valuation is $25.6 million.

Series C rounds rose by 93% in the first three quarters of 2013. The median Series C valuation is now $75 million.

The median valuation for Series D or later rounds is where numbers are really soaring — valuations spiked by 116% over the past five years and surpassed the $100 million threshold — it stands at $132 million.

The rise is even steeper in the software sector, which increased by 350%.

Pitchbook said this makes sense, since investors are willing to pay higher prices for companies that are closer to an exit event, like an IPO.

The economy is improving and tech companies are generally doing well. Venture capital investment remains high and 60 venture backed companies have gone public so far this year, which is higher than previous years.

Two of these companies have yet to demonstrate that they can actually make money.

There are dozens of startups with valuations over a billion dollars. Plenty of people across the tech industry are saying that these numbers are inflated and engender false expectations, causing concern about a tech bubble.

However the industry has (hopefully) learned something from the last dot-com crash. It is also a different eta. Cloud computing, mobile tech, and the increasing penetration of Internet access around the world do, in fact, create larger opportunities.

The rise of valuations can’t go on forever, though, and Picthbook said there will likely be an uptick in flat and down rounds in the coming years. 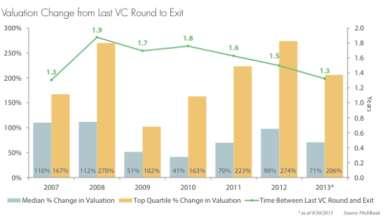 Another interesting trend is that investors are acquiring smaller stakes in their investments. Across all stages, Pitchbook found a “structural decline” in the percentage of the company being acquired, and a general shift towards more entrepreneur-friendly term sheets.

As mentioned above, it has been a good year for IPOs. A greater percentage of venture capital exits are IPOs, although the median percentage change in valuation from the last VC round to exit declined. This is partly due to the rising valuations, as well as the shorter time period between final funding rounds and hitting the public market.