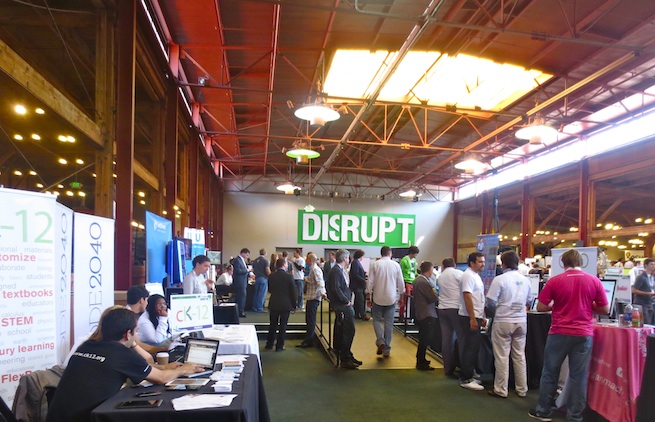 At Disrupt, the annual conference in San Francisco, a booth was jammed into every inch of space, product demoes were taking place in the bathrooms, and entrepreneurs scrambled to leave a lasting impression in 10 seconds or less.

Frustratingly, the next Mark Zuckerberg may have been tucked behind one of those startup booths, nervously cradling his iPhone, while the real thing stood triumphantly on stage, stoic in his defense of the social networking empire. Our attention was captured by the old guard, Zuckerberg, Dorsey and Hoffmann, while the next generation of entrepreneurs had to fight for a moment’s notice.

At conferences like Disrupt, tech entrepreneurs flood the hallways, perennially on the hunt for the relatively small number of investors and press. Inevitably, some are far more successful than others. If you’re considering launching your startup at a tech conference like Disrupt or DEMO, here’s how to do it right.

Do it with a Demo 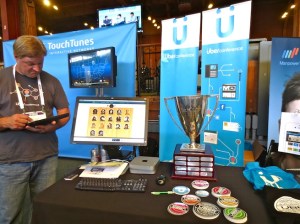 Above: UberConference gets it right

I caught up with Shasta Ventures‘ Jacob Mullins while he was circling booths on the look-out for fresh talent. His advice for exhibitors? “Don’t even think about it if you don’t have a demo!”

Bonus points if your demo is portable. At a chaotic conference, you’ll take meetings in the lobby or the parking lot. Make sure you whip out your iPhone for a quick and dirty demo of how to use your app or product. I had some great conversations with entrepreneurs in the lunch-line. The best prepared were able to juggle a fajita, show me their app, and spike my interest with a compelling 30-second pitch.

I noticed a few booths at Disrupt today without a laptop or iPad set up to showcase their product but laden with press packets and SWAG. This is the biggest mistake an entrepreneur can make. The last thing you want is to appear insincere.

If you’re an entrepreneur and attending as a guest to survey the scene, it’s still worth bringing along your demo, since you never know who’ll you’ll meet. If you’re in the early stages and don’t have a demo yet, I suggest staying home and devoting your time to product, instead of attending networking events.

Gimmicks are hit or miss — make sure you’re authentic 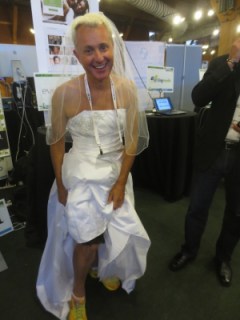 Who could forget the man in the wedding dress? Evergram’s founder (pictured, left) caught my attention when he tossed me a bouquet of fake flowers. I chatted with Duncan Seay, expecting to be merely amused but was struck by his shrewdness and sincerity. Like all great networkers, Seay followed up the next day.

Here’s his 30-second pitch: Evergram is a “future messaging” app for weddings. It lets you send an audio or video message to a happy couple that is delivered at a later date. The idea originated when Seay was diagnosed with cancer and wanted to find a better way to communicate with his loved ones.

Another smart marketing tactic worth mentioning was Taptera’s TechCrunch Disrupt iPhone app. The enterprise app appeared everywhere for all the right reasons — Taptera succeeded in providing a useful service for the attendees and building brand recognition.

If you’re not willing to don a wedding dress, it’s always a nice touch to offer up a plate of brownies, cupcakes, or beverages to those that stop by your booth. Lunch is typically served late at these events, and the lines are long. A little generosity will go a long way. But make sure your startup isn’t overshadowed by your sweet treats. VentureBeat’s own Rebecca Grant was more impressed by the cupcakes than the startups up for grabs at Disrupt.

It’s okay to approach (but NOT in the bathroom)

Benchmark Capital’s Gus Fuldner, who perused the occasional booth, told me he felt it was entirely appropriate for entrepreneurs to approach him with a short pitch — “that’s what I’m here for,” he said.

It’s all about timing. There is nothing more irritating than being pat on the shoulder by an eager PR person or founder when you’re angling for a glass of water or a bite to eat. Don’t stop anyone if they’re rushing somewhere, or in the middle of a conversation with another entrepreneur.

If you remember one thing from this article, remember this. Do not make the cardinal error of pitching your startup in the bathroom — you’ll be the butt of a joke. One investor I spoke with had me in peals of laughter. A Korean entrepreneur, who will remain nameless, demoed his iPhone app at a urinal.

Introductions are worth their weight in gold 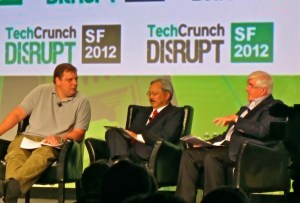 At tech conferences, name dropping is everything. Google Ventures’ Wesley Chan told me that he’s far more likely to hear out a pitch if a friend or contact puts him in touch. It’s basic pop pyschology: investors are always on the lookout for the next big thing, so they won’t be able to resist if a fellow investor or entrepreneurs sings your praises.

These introductions are typically serendipitous, but it’s still worth doing your homework. Already raised some cash? If your investors are attending, ask them to mention you in casual conversations with the media. Overwhelmed by the sheer number of startups, I asked about a dozen VCs for their thoughts on the startups and spaces to watch.

Likewise, if any of your high-profile advisors are planning to attend, ask them to advocate for you. If not, find out who in your network is on the guest list or has a speaking slot, and try to grab a coffee with them before the chaos ensues. Fuldner told me he planned a series of back-to-back meetings with entrepreneurs during the week before Disrupt so he would have a bit more time to explore the merits of the idea.

More than once, I had entrepreneurs tell me they enjoyed reading my stuff at Business Insider or TechCrunch. A big no-no, especially when I’m wearing a clearly-labeled VentureBeat badge. Do not feign to know your audience if you don’t. It’s better to ask questions than to try to pander to someone’s ego and fall flat.

If you’re not a Silicon Valley native, get a basic awareness of the local tech community before you jet to a conference. Peruse the tech blogs, so you’re aware of the latest news (always a good talking point if you’re at a loss for words), and will be able to recognize an angel investor or writer meandering through the hallways.

Know your space — make sure you and everyone on your team is able to discuss fluidly all the major players, the challenges, and the competitive landscape. The investors and press that you’ll meet are often generalists or are more knowledgable about another space and will need a crash course.

However, you do not need to have an encyclopedic level of knowledge. Javelin Venture Partners‘ Jed Katz told me that it doesn’t make much of a difference to him whether an entrepreneur is well-versed in his background or has a backlog of knowledge about the investment firm. If anything, it can have a negative effect if an entrepreneur knows too much. Don’t be afraid to approach an investor if they haven’t shown much interest in your space in the past. Venture capital firms, especially those focused on early-stage startups, are constantly looking to diversify their portfolio. Even if it’s not a fit, they’ll occasionally still take a meeting and may choose to participate in a later round.

And finally, once the conference is over, do not forget to follow up! You’ll end up with a stack of business cards, sure, but an email is an opportunity to make a second impression. My trick is to scrawl a quick one-line summary of the conversation on the back of their business card. It’s the best way to expand your network, and in Silicon Valley, it’s all about who you know.