With $2 billion worth of solar panels installed on 70,000 customers’ homes across 12 states, Sunrun is well on the way to proving that its model for solar power generation can work.

But it wasn’t always so clear. When the company started, in February 2007, cofounder and chief executive Lynn Jurich says she faced an enormous amount of skepticism.

“It was a hard model,” she said. She had trouble convincing investors to back Sunrun because they were concerned about how capital-intensive the business would be. And a look at the string of solar company failures over the past few years suggests that investors may have been right: Solar is a risky, capital-intensive business.

Before you can start generating electricity from the sun, you need to install a lot of solar panels. A typical household rooftop solar system costs at least $12,000, and often as much as $30,000. Jurich’s idea was that Sunrun would install these systems on houses, but retain ownership of them — and then make money by selling electricity, at below-market rates, to the owners of the houses.

In effect, Sunrun is building a vast, distributed solar power generation plant by renting space on people’s rooftops. The “rent” it pays comes in the form of a discount on the electricity it sells. Win-win: Homeowners get to go green, they benefit from cheaper electricity, and they don’t have to give up anything other than roof space they weren’t using anyway; Sunrun gets cheap “land” and can profit from the difference between its costs and what it receives for selling that power.

“The model on its face makes a ton of sense,” Jurich told me in a recent interview. “Homeowners already buy a ton of electricity as a service, and who wants to spend a ton of money to buy a solar system and maintain it themselves?”

There’s an additional advantage: The federal government offers a tax credit for homeowners to install solar systems. By installing it for them, Sunrun gets to claim those tax credits, which it can then sell to banks or other companies.

Long story short: This is a tricky financing play. By getting banks to front the money for solar panel installations, Sunrun can build those panels — then pay the banks back in tax credits and in the cash made by selling electricity. 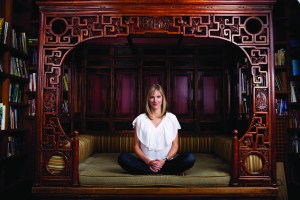 But before the economic engine could get humming, Sunrun had to prime it with a few customers. And it couldn’t get customers without having some money to build solar systems for them. So after closing its initial funding round of $12 million, Jurich and her partners funded the first crop of solar panels out of the company’s cash equity. It used that momentum to try and raise the debt financing it needed to continue growing.

But it was a tough sell, because they were trying to raise that money in the teeth of the 2008 recession, from loan originators that were used to lending money for multibillion dollar power plants, not distributed networks of home solar panels. If you’re loaning somebody $2 billion to build a power plant, you know where the money is going, and it’s easy to evaluate if the business is doing well. $2 billion to build a bunch of solar panels is a whole different thing.

Eventually, Jurich says Sunrun was able to close a first $40 million round of debt from U.S. Bank. And then, in late 2011, the federal government changed the solar panel subsidy, ending one of the company’s major selling points.

“It changed the value proposition we were offering consumers, and our sales totally fell off the cliff,” Jurich says. It was, she says, really hard to get capital and customers in balance for the first few years of the company’s existence.

“It was like, ok, we got the capital — but now, whoops, the value proposition changed and we don’t have the customers,” Jurich says.

The situation was bad enough that Jurich and her cofounders contemplated winding the business down. Without the subsidy, it looked like the market opportunity might not exist any more.

But Jurich says she stuck with it, partly because she was on the front lines of the business. She knew what customers wanted, and she had a sense that Sunrun could still make a compelling pitch to them. That gave her the confidence to continue pushing through, she says.

Not every entrepreneur does that — many hire a sales executive, and then stop going on sales calls, so they lose touch with what customers really want.

“Let’s say you’re a product girl, or you’re a technology girl, so that’s your comfort zone,” Jurich says. “Don’t overly rely on bringing in the sales person — you need to be in every one of those phone calls so that you’re able to tweak your business model and your product and make tough calls about the longevity of the market.”

Ultimately, Sunrun tweaked its pricing, stayed in the market, and went on to raise $2.8 billion in debt financing, of which $2 billion has been deployed building homeowner solar systems.

“And then Solarcity came along and copied us,” Jurich laughs.

(She hastens to add: Solarcity is more of a frenemy than a direct competitor. While larger than Sunrun, it’s more focused on commercial installations — and the retail electricity market opportunity, for now, is far bigger than both of them.)

Much of this story is captured in a cute, animated video narrated by Jurich and produced by one of Sunrun’s backers, Foundation Capital. I’m embedding it here because it’s a rare look at the ups and downs of an entrepreneur’s journey. Too often we hear the sanitized, mythologized version of a founding story. And no doubt this story has been edited to remove the really gnarly parts too. But in general, it’s a refreshing look at how much of a nail-biter Sunrun’s early phase was.

Many other companies can no doubt tell similar stories.