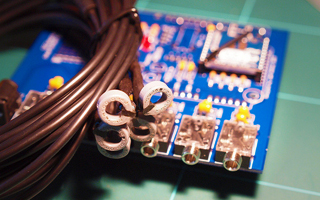 Open-source hardware has one big stumbling block: How do you get distributed teams from around the world working together on the same prototype?

Open-source software communities have myriad tools for writing code together and sharing it all over the place. But creating and sharing hardware together has been a bit more problematic.

Last month, we spoke to Facebook about how its own open-source hardware projects were going. Project lead Amir Michael told us, “A lot of the tools [for open-source hardware design] aren’t there yet. If someone wants to make a change to one of our circuit boards, it takes hundreds of thousands of dollars to get that package. The average hacker doesn’t have that. Most of the contributions so far come from other large companies. We’re hoping to change that in the future so a guy in his garage can design a motherboard.”

Now Upverter gives that garage hacker a tool suited to exactly the kind of design Michael was talking about. Its web-based HTML5 editor has all the basic commands and features, including undo, redo, rotating, versioning, annotation, commenting and sharing designs. The canvas for creating designs is infinitely large, and the app features a crowdsourced library of parts and their attributes, including cost.

Some of the projects currently being worked on with Upverter include a circuit to help a driver park a car, a combination lock, a circuit for turning off a flatscreen television set from 100-150 feet away and a device designed to increase the sensitivity of an audio receiver.

Upverter’s three founders worked previously as engineers. “We felt the pain from the industry standard tools being so isolated and disconnected,” said co-founder Zak Homuth.

“When we started Upverter, we decided to spend a little bit of time working on our personal pain. As it turns out, there is a market, and we got stuck working on it.”

Hardware hackers, hobbyists and folks in the DIY or maker communities are a primary target audience for Upverter. Homuth said he also sees the tool as perfect for many consultants, small businesses and startup companies.

“Over time, we hope to work our way up into enterprise,” he said. “For the last few months we’ve been working pretty aggressively on making it possible to import the designs Facebook was talking about. We’re also working with two other enterprise users. Right now, our most common designs are tweaks to Arduinos.”

Upverter is part of a class of software called electronic design automation or EDA. EDA can be used to design anything that has a circuit board or that plugs into a socket. Homuth said that most of the larger players in this $4 billion market have been expected to enter the cloud with web-based tools for some time but that most have been very slow to act.

“We also see lots of potential growth to the market through pay-per-use and democratizing the tools,” he noted. “Hobbyists can’t afford $100,000 tools, but they would gladly pay something more reasonable.”

But the Upverter team’s goal isn’t just to revolutionize open-source hardware design. They also want to fundamentally change the way all hardware is designed.

“If we can change the paradigms away from single, siloed designs and towards gluing shared building blocks together (kind of like the shift software made away from statically compiled and towards shared libraries) we would change the way hardware gets designed across the board,” said Homuth.

Like Github and other open-source tools, Upverter also has a monetization plan. Right now, using the web-based design editor is free, and other users can see your work. In the near future, Upverter will launch paid options to give hackers more privacy in their designs. The team also plans to add tools for real-time collaboration and a printed circuit board editor.

Homuth said his team is not actively attempting to raise money but is rather focusing its energies on building on the product and its userbase.

Upverter is one of 80 companies chosen by VentureBeat to launch at the DEMO Fall 2011 event taking place this week in Silicon Valley. After our selection, the companies pay a fee to present. Our coverage of them remains objective. There’s still plenty to see at DEMO, and VentureBeat readers can get a special discount on registration for the remainder of the show at demo.com/VBDay.