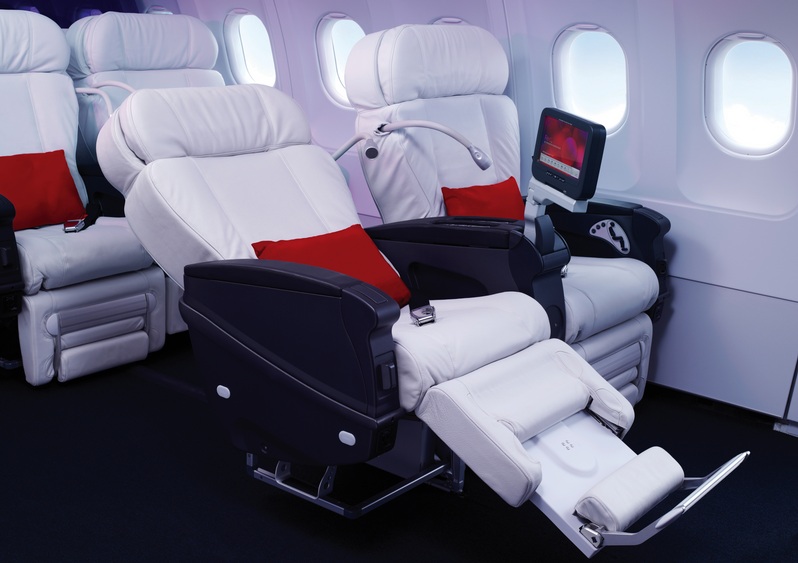 This week, San Francisco-based Virgin America is celebrating its fifth anniversary. That’s an anniversary that few startups hit and very few startup airlines hit. And it’s quite the feat given that oil prices have increased 45% since the airline launched and that the economy has, at best, been stuck in neutral in that time.

“We’re the first real startup since jetBlue,” Virgin America CEO David Cush told me in an interview earlier this year. “When you’ve got 10 years between startups, then that tells you it’s a very difficult business. Our obituary has been written many times, but we’re here and we’re doing well.”

Low-cost carriers have generally followed a standard playbook when launching:

The big thing these carriers offer is a lower price for some extra degree of inconvenience.

That standard playbook triggers a standard response: legacy carriers put extra seats on those routes from their more convenient airports. They price all of this extra capacity so low that the upstart airline can’t make a profit. They lure in their frequent fliers with generous rewards to keep flying on the legacy carrier. (When Independence Air launched in Washington, United offered frequent fliers the opportunity to earn a trip around the world to keep them flying United.) Upstart airline goes out of business.

Too many companies try to compete on price, which is a hard competitive advantage to sustain. Someone can always undercut you, and the price-sensitive customers you attract are happy to jump ship. One of my recurring themes when I talk to companies is to sell value, not price. Virgin America exemplifies that.

Virgin threw out the playbook. It launched with brand new aircraft. It flew to prime business airports like San Francisco, LAX, JFK, and Washington Dulles. Its first-class service is infinitely better than typical domestic first class and almost in the same league as international business class. That’s not to say that it doesn’t sell price — just the existence of a competitive carrier tends to drive down price — but it’s not the sole reason to choose the airline. Virgin has created a brand that many people will pay a premium for.

But it also offered a lot of things that weren’t easy for other carriers to match: power at every seat, an in-flight entertainment system with both on-demand and live TV, and an embrace of social media. Virgin was also the first carrier to offer WiFi on every plane in its fleet. “It’s a game changer for us,” Cush said of inflight WiFi.

Legacy airlines can adjust fares several times a day. But they can’t completely retrofit their fleets. Five years later, many United aircraft still have only a few ancient tube TVs in the cabin with vapid content that has to appeal to everyone and, as a result, appeals to no one.

“It’s where our guests live,” Cush said, explaining why the airline is so focused on social media. Given the demographics of the Bay Area and its younger audience, “It’s how people want to communicate with us.”

Over Thanksgiving, Virgin America ran a promotion with Gilt City that, for $60,000, gave the purchaser and 140 some guests a roundtrip flight to anywhere on its network along with naming rights for one Virgin plane.

A group from Stanford business school purchased that ticket for a spring break party to Miami. Instead of just flying the trip as a charter, Virgin America created an experience out of it. The whole plane, including the passengers and flight crew, got groovy and dressed in ’70s clothes.

“When we came to the gate, they had music playing and greeted us with amazing ’70s roleplaying like ‘Welcome aboard to the groovilicious flight to Miami. We’ll be rocking the whole way so get your gogo boots ready,'” said Don Hoang,  who does business development for Klout. “Virgin is awesome. That’s it — they used this flight as a PR campaign, but they really won over all of us. We will remember this for the rest of our lives and talk about it as one of the best weekends ever. They are truly an amazing brand and understand the LTV of a customer. I don’t think of Virgin as just an airline but a lifestyle brand.”

Part of the airline’s quirkiness has been driven by having to compete with much larger rivals. Virgin America does a lot more with event marketing and social media than most carriers.

“As a new airline we certainly don’t have the large advertising budgets of many of our competitors, and because we have a unique product largely driven by word-of-mouth about how different the onboard experience is, when launching into new markets we have had some success with cost-effective live events that tie into that product message and drive awareness about it in new ways that are relevant to our guests and social media audiences,” said spokeswoman Abby Lunardini. Lunardini points to several examples, including a YouTube promotion when the company launched Wifi on its  first flight back in 2008, smaller live events at mobile food trucks in San Francisco and LA, offering two-for-one flights via Loopt when it launched its Mexico flights in 2010, and, at its Philadelphia launch, partnering with an entertainment outlet for a live event to celebrate the live TV product onboard, something new for an airline in that market.

“Because we’re launching into new markets [where] local folks may have never flown with us, there is a value in introducing the unique cabin product to the local community (including corporate sales) with aircraft tours etc — which is always incorporated into the launch events we do,” said Lunardini.

As part of its anniversary celebration this week, Virgin is tossing out the ceremonial first pitch at Saturday’s Giants game aboard a flight bound from Seattle to SFO. That will be broadcast live via WiFi to AT&T Park.

They need to think hard about these questions:

One place to look for inspiration is Virgin America’s twitter feed, @virginamerica.

“We’ve got a lot of creative people here who like to try new things,” Cush said.

I agree. They’re among the best marketers I know.