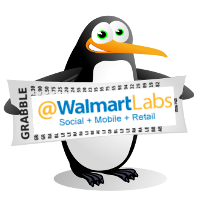 Grabble produces a point-of-sale technology that integrates with mobile phones. With the rise in NFC-enabled devices, which allow consumers to make purchases using only their phone or tablet, it makes sense for Walmart to turn its attention to this new method of payment. It’s also worth noting that a number of big companies, such as Google and PayPal, are developing technology to support transactions using a device rather than a credit card.

“Grabble started with a vision to make shopping smarter in a garage in Wollongong, Australia, and today we are pleased to announce that Walmart has acquired the company and we will be joining the @WalmartLabs team in Silicon Valley,” the company wrote in a statement. “We’re excited about seeing our passion play out on a larger stage and especially look forward to working with the team at Walmart.”

Founded in January 2010, Grabble previously received seed funding from startup incubator Startmate. Grabble was co-founded by engineers Stuart Argue and Anthony Marcar, who will both be joining Walmart Labs in Silicon Valley as part of the acquisition deal.