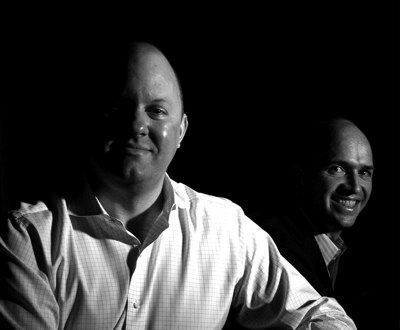 Marc Andreessen, the entrepreneur who co-founded the first significant Web browser Netscape at 22, is moving on to his next profession: Venture Capitalism.

Andreessen (pictured left) with his long-time business partner, Ben Horowitz (right), have raised $300 million in fresh capital to form a firm they’ve called “Andreessen Horowitz.” They’ll invest the money in a way they say is more suitable to today’s needs. They’re particularly enthusiastic about investing in Silicon Valley, saying it is unparalleled in its software prowess.

I spoke with Andreessen last week. The fund has been widely reported, including here at VentureBeat, but until now the duo have not talked publicly about the fund.

First, they’re going to spray small amounts of their first fund — checks of around $50,000 to $100,000 — into between 60 and 80 early stage companies, on the belief that a new wave of startups building with inexpensive web tools can get by with less than $500,000 in total funding over the lifetime. They’ll team with other investors, including prolific Silicon Valley angel Ron Conway to support these companies, which will be comprise mainly a few engineers with little need for guidance. (Conway is in fact an investor in Andreessen Horowitz).

Next, they’ll invest between checks of several million dollars into 12 to 15 more advanced companies, which typical for venture capital firms. This is where the two will spend most of their money, and time, taking board seats (7 or 8 each) at these companies. Such companies need more help in management and in growing a company, Andreessen said. Only the best of the very early-stage companies they back would reach this phase.

Finally, they’ll invest checks of up to $50 million into two or three “late-stage” deals, Andreessen said.

The two met at Netscape, when Andreessen hired Horowitz (left) to join as a product manager at that early browser company from Lotus. Horowitz earlier had worked at Silicon Graphics, which at the time was considered one of the hottest companies in Silicon Valley. After Netscape was sold to AOL in a $10 billion deal in 2009, the two put in some time at AOL, and then another company, called Loudcloud, which eventually morphed into a company called Opsware, and sold in 2007 to HP for $1.7 billion. Until recently, Horowitz ran HP’s software division, where he managed 4,000 people. Andreessen, meanwhile, co-founded a company called Ning, which has raised more than $100 million. He is chairman there. 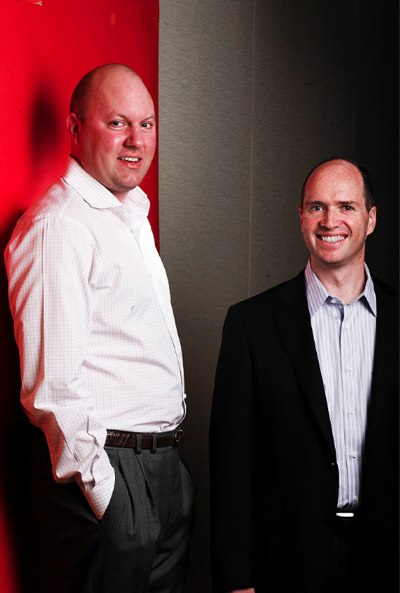 Notably, Andreessen sees most of the interesting action still happening in Silicon Valley, as opposed to other areas of the world, and says they’ll focus their investments there, though “not necessarily exclusively.” The firm will be based on Sand Hill Road, home of most big-name venture firms in Silicon Valley.

Andreessen told me an interview that the two have proven themselves as founders and company builders, and see themselves as “throwbacks to how venture capital firms got started in the 1960s and 1970s,” when entrepreneurs like Don Valentine and Tom Perkins with real experience running companies launched venerable venture firms like Sequoia Capital and Kleiner Perkins.

Andressen said they’ll invest in all of the “new” business model areas, including consumer internet, cloud computing and consumer electronics. He said they would also invest in “back-end” companies or those with less exposure to consumers, such as virtualization and cloud storage.

A “new wave” of consumer electronics companies with most of their value in software will be targeted by the fund, Andreessen said. Here, the U.S. has become dominant, and specifically Silicon Valley, he said. He listed products such as the iPod, iPhone, Palm Pre, Blackberry, Tivo, Sling, Flip and Jawbone as examples. Consumer electronics were all based on analog technology until about ten years ago, but since then, they’ve transitioned to digital and become very sophisticated at the software level.

Meanwhile, other parts of these devices have become less valuable, and regions like Japan and Korea are the losers.  The chips in these devices have become commodities — you can buy them “off-the-shelf.” And contract manufacturing has also gotten cheaper, with much of it done in Taiwan and China. The Japanese, which for a long time specialized in precision manufacturing, such as for cameras, audio recorders and televisions, are now struggling. Korean dominance, too, is fading. U.S. consumer electronic electronic companies can build their devices based on a TI chip for $5, and add in hardware and manufacturing for $15, but they can then embed their own software in the device and sell it for $139. “That’s a good business,” said Andreessen. “Consumer electronics left the U.S. 20 years ago, I think it’s going to come back.”

He said he thinks the Palm Pre is “light-years ahead of everything except for the iPhone.” [By the way, Palm executives will be speaking publicly at the MobileBeat2009 event on July 16 for the first time since the Pre’s launch, where these themes will be discussed.]

Andreessen said the same transition to software is happening on the “back-end” too, where networking, storage, and database companies are all selling hardware-based products where the primary innovations are in software. For example, he and Horowitz have already invested in a company called Extrahop, which records and analyzes different types of traffic (Web, email) passing over IP-based networks in new ways, based on Intel multi-core CPUs. The company builds its own operating system and application level upon what is essentially a white-box PC.

I asked Andreessen how his bullish view on the U.S. squares with all the hand-wringing about the lack of U.S investment in education and science.

“I don’t agree with the widespread handwringing,” he told me in a follow-up email. “It’s certainly true that we can do better on both education and immigration, but the current situation has not prevented the US from being the place where Netscape, Google, Yahoo, eBay, Amazon, Paypal, Facebook, MySpace, LinkedIn, Twitter, VMWare, Juniper, Nvidia, Siebel, and Salesforce.com were created, all within the last 15 years…..Contrast that to any other country, or region, and I’ll take it.”

The two have already made 45 investments over the last 4 years, or a pace of about one a month, including in companies like Facebook and Twitter. Andreessen and Horowitz are equal partners in their partnership.

Few venture firms are able to raise money these days. Large institutional investors, such as pension funds and university endowments, which have typically supplied money to venture firms, have pulled back — because most venture firms have lost money over the past decade.

That Andreessen and Horowitz have raised money in this environment reflects the respect Andreessen enjoys as one the valley’s great entrepreneurs.  Other reports, including BusinessWeek, have reported that Horsley Bridge Partners, a San Francisco firm that invests corporate and government pension-fund money, Reid Hoffman of LinkedIn, and Peter Thiel, former CEO of PayPal, are also investors. Andreessen declined comment on this. BusinessWeek also reported earlier that Accel Partners, Greylock Partners and Kleiner Perkins’ John Doerr, helped introduce the new firm to investors — as a way to create goodwill for dealmaking later on. These are all signs that Andreessen Horowitz have already accomplished the hardest part of becoming a top-ranked venture firm: Having profile and great connections. Now the firm will have to put in hard work to generate profits, but it has a huge head-start: Many entrepreneurs will be sure to court the firm because of Andreessen’s reputation.

By the way, there’s lots of other good coverage elsewhere, including Andreessen’s relationship with Facebook founder Mark Zuckerberg, (see PEHub interview about how Andreessen actually “passed” on Facebook) and how the firm won’t be investing in electric cars or cleantech, and won’t be investing in China or India (Fortune cover piece).