Familiar names dominate the top of the app store charts … how do you compete against Clash of Clans and Candy Crush?

Paid app install campaigns can deliver short terms gains, but also some of the worst user quality scores and ROI. It’s a user acquisition model that requires outbidding the market for an app install, and the ultimate winner is the one with the highest lifetime value (LTV). These campaigns are winner-take-all, with no second place. In other words, it’s a game few can afford to play — unless you can find an advantage.

By developing your organic acquisition channels through app store optimization, or ASO, you can gain an edge on the competition. Not only can ASO net you additional organic users, but it can also make your paid efforts more effective.

If you acquire half of your users via organic traffic — with these users monetizing better than those from any other channel — your app ends up with a higher average LTV. You can then use this high average LTV to increase your paid ad spend and maintain the velocity required for ranking at the top of the charts, turning leads into more organic installs.

Enter the rise of organic mobile marketing: You promote your app by positioning it for discovery and conversion by a relevant target audience. 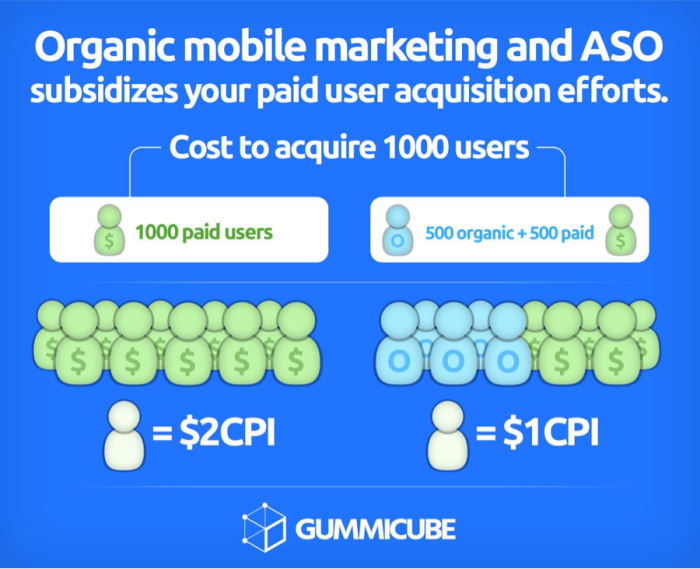 Mobile has matured beyond CPI

App store search is the most common way users discover and download new apps. But with 1.5 million mobile apps in both the Apple and Google Play App Stores, app discovery presents real challenges for both users and app publishers.

App store optimization addresses the entire app funnel, including how to position your mobile app for organic discovery and conversion by your target audience.

There are a host of services that attempt to predict app store search using Google web search data as a proxy. Many of these services have tools that even look like the Google Keyword Planner, which is a free and easy-to-use tool.

You should not use web search as a proxy, replacement, or predictor for app store search, though. Users search in the app stores differently than on the web.

According to moz.com, web search queries tend to be “Do,” or transactional queries; “Know,” or information queries; and “Go,” or navigational queries.

Eighty percent of app store search, on the other hand, tends to be 2-3 word phrases related to app features. Single-word app and brand name searches make up the balance.

Understanding how their target users search app stores enables publishers and marketers to carefully craft their app listing to include the creative elements and calls to action specifically for their intended audience.

Is your target audience searching for “photo albums” or “photo collage”?

If your app includes both features but your audience is searching for “photo collage,” this impacts your entire app store funnel. If the way to describe the feature is interchangeable, the data is telling you to refer to “photo collage” instead of “photo albums.”

Knowing what features your audience is searching for and the specific phrases they use to find them affects your app’s category, including which keywords you target in your app listing in your descriptions and potentially even the app’s name/title.

The goal is creating the best basket of keywords that maximizes coverage of relevant search terms from your target audience, in a category that best matches the market’s expectation for similar apps.

When selecting keywords, remember that Apple and Google have always been vigilant against inappropriate keyword stuffing. Use keywords only in an appropriate way. Don’t include brands and long strings of keywords that don’t really represent your app.

There have been rumors about an algorithm change within the App Store recently; however, most apps that have seen declines are those that abuse the system. It appears that apps using reasonably consumer-friendly descriptors were not affected, and the change was focused on those with blatantly stuffed keywords in long titles that created a poor user experience.

If users never find you, your conversion rate is guaranteed to be zero. A lot of the optimization effort is spent on how to maximize discovery from an ultra-relevant audience.

Equally important is converting these views to installs and users.

The app name/title, the icon and ultimately screenshots, app preview videos (optional), and ratings are the deciding factors for many potential users.

You already know what features you want to highlight and how to communicate the way your app addresses users’ specific needs because you have app store search data on your audience.

A well-made app addressing an identifiable market that still struggles with discovery would be well served to investigate organic mobile marketing and app store optimization, starting with relevant audience search coverage and optimized creatives that convert views into users.

Mobile app publishers without a single paid install can reach the top of the charts by addressing their target audience so well that organic downloads and ratings drive them up past apps that stopped spending (and thus potential users stopped finding them).

Tapping into organic app traffic while strategizing your organic mobile app marketing is a defendable position that returns far greater value and ROI than buying installs.

There is more than app store search

While app store search is the main driver of app installs overall, combining traditional marketing with data gleaned from the app stores provides a valuable and often untapped channel.

In fact, the biggest social networks are increasingly mobile apps themselves.

This trend of mobile user growth from social networks is expected to continue to expand as direct app installs and app links are adopted across these and other platforms.

As the world of mobile continues to rapidly expand, organic marketing efforts should begin to shift their focus to reevaluating their apps’ target audiences. Armed with data on what queries users are using to look for apps, marketers are better equipped to position their app for discovery in the app stores and in booming social networking sites. 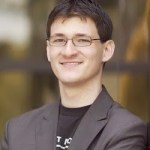 Dave Bell is the cofounder and chief executive officer of Gummicube. He is responsible for overseeing the business strategy, including growth and market development. Dave has over 15 years of experience publishing, marketing, and distributing mobile applications and games across carrier, direct-to-consumer and app store channels.