Top online marketers achieve more than three times the conversion rates of the bottom third, according to a new digital marketing optimization study from Adobe.

Why? They invest in a culture of data, testing, optimization, and analytics. 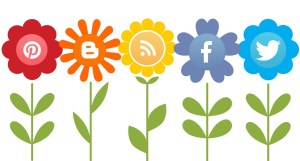 Adobe, which of course offers its own digital marketing optimization tools via the Adobe Marketing Cloud, released a study today in which it asked over 1,000 marketers what they were doing to optimize sales, and what kinds of conversion rates they were achieving. Those marketers use a range of analytical tools from Monetate, HP, IBM, Adobe’s own offerings, and other companies.

We’ll be talking all things growth, marketing, and tech at GrowthBeat 2014.

So what’s the difference? Adobe’s study highlighted five key differences between winners at the top of the spectrum and losers at the bottom of the barrel. 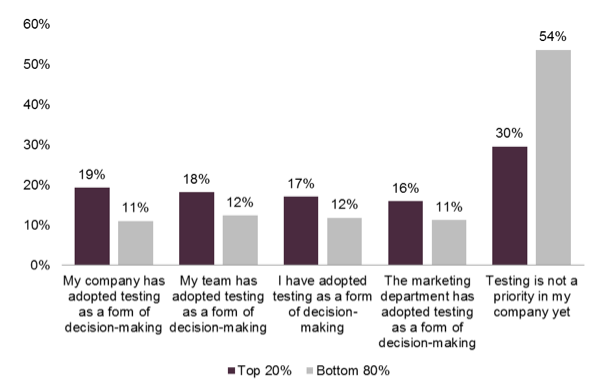 Above: Differences between the top 20% and bottom 20% of online marketers

What’s interesting here is that while the top 20 percent are more likely in every case to have adopted analytical, data-driven processes to improve marketing, the differences are not that great between the bottom and the top. If you ignore the priority on testing, the top 20 and bottom 80 are actually pretty close, often within five to eight percent likelihood of testing.

That suggests that the top companies are simply doing it better, or doing it with better tools. Or that one of the many potential pitfalls in marketing optimization — dirty or inconsistent data, misaligned KPIs, and lack of cultural support for analytical marketing — has claimed a large number of victims.

“Companies are finding that an investment in optimization, analyzing, and testing pays off,” Krypel said.

Top online marketers are 54 percent more likely to spend at least five percent of their budget on optimization, which includes technology, agency fees, and professional services. That, Adobe says, is a “cyclical process – more budget towards optimization efforts yields higher conversion rates and revenue to then reinvest in additional activities.” 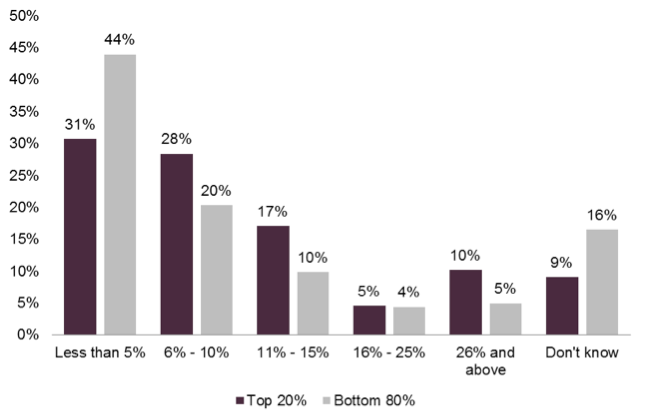 Above: Percentage of total marketing budget allocated to optimization activities

Even though the top 20 percent are achieving better results via optimization, there’s still a long way to go.

Only 34 percent of companies Adobe surveyed currently prioritize testing, Adobe told me. And even among those that do, the data shown above demonstrates that online marketers can devote 6-10 percent of their overall budget to optimization, or even as much as 15 percent, and still be in the bottom tier in terms of conversions and ROI.

Done right, there clearly are benefits. 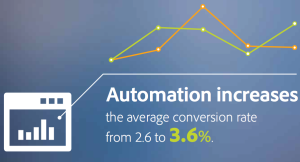 “Optimization will just help marketers to do their jobs even better,” said Kypel, who has authored a book on customer-centric design. “The online customer experience has never been so important … it’s crucial for online companies to determine which experiences will engage customers and which will drive them.”

Just as clearly, however, the data shows that there are many companies that are trying to do it right and investing the money in optimization but failing.

My guess on what’s happening here is that it’s easy to look at your Google Analytics and tweak your Facebook ad campaign and tell yourself that you’re doing data-driven marketing. It’s an entirely different thing to adopt a wholesale culture of testing, optimization, and data-driven decisions with a common corporate understanding of what counts as clean, consistent data.

And it’s an entirely different thing again to do it at scale with hundreds or thousands of individual campaigns.

“For many, content is the new advertising,” Adobe says, and the top 20 percent of online marketers are much more likely to target their content so that it is personalized for website visitors.

Some of that is done manually, but successful marketers are 83 percent more likely to automate content targeting with the aid of data. 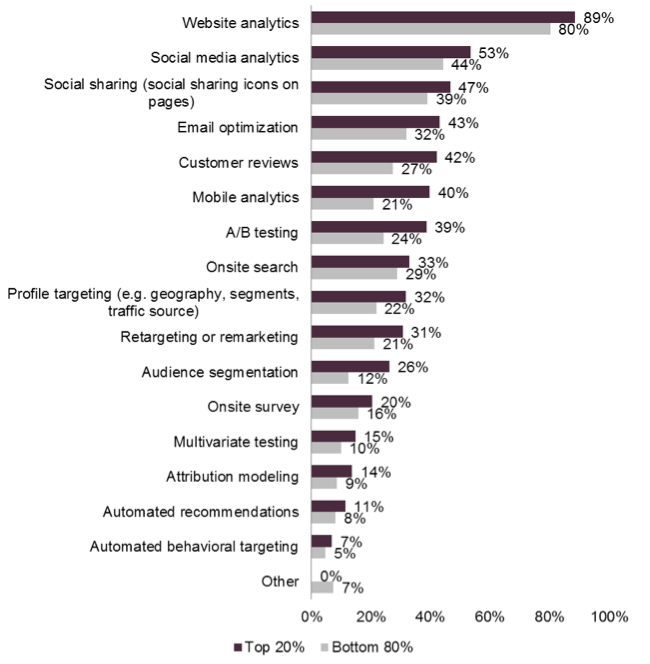 Above: The customer experience measurement and optimization tactics companies currently use

According to a Forrester study cited in Adobe’s report, marketers who target more than 20 percent of their website visitors achieved twice the average conversion rate, hitting five percent conversions.

4. Beyond the marketing department

As is clear to everyone who has been paying attention, marketing has changed dramatically over the past few years. And most traditional marketers don’t yet have the toolkit to adapt.

So it’s critical that marketers reach outside of their department.

According to Adobe, the top 20 percent of digital marketers are “88 percent more likely to engage other departments for contribution and expansion of their testing effort,” and those who do “see a lift in conversion from the average of 2.6 percent to 4.3 percent.” 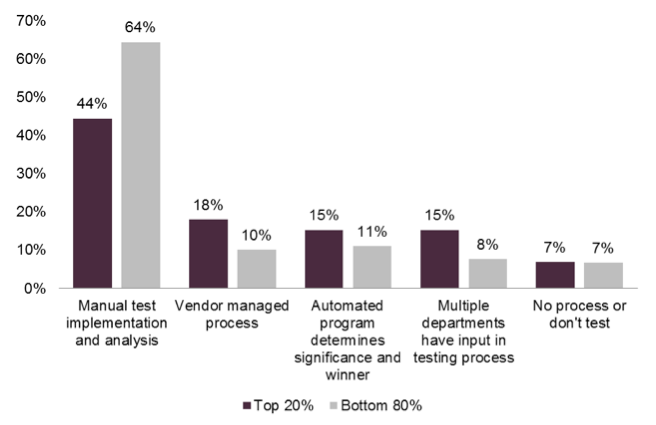 Above: Which customer experience measurement and optimization tactics do you currently use?

That could include reaching out to IT and development for help in implementing marketing technology, or help in automating processes. And it could be integrating optimization within each business unit as a standard. 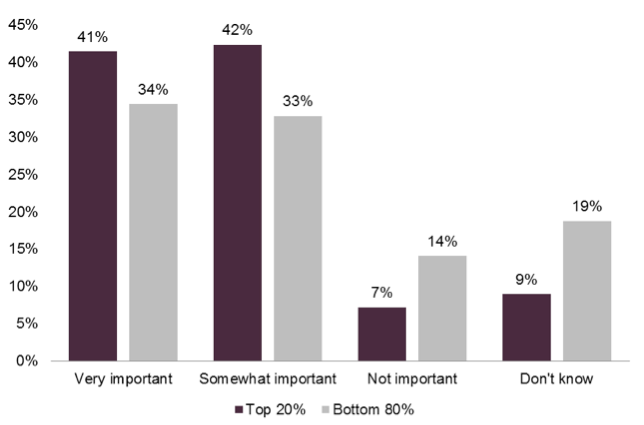 Above: How important is focusing on mobile to support your cross-channel efforts in 2014?

About 50 percent of current retail web traffic is now mobile, Adobe’s study says, and that allows you to target with the lowest-hanging fruit: location.

“Every mobile device has the inherent ability to track where in the world is Waldo at a given time,” Adobe says. “The easiest step towards mobile personalization is location-based targeting via GPS or Wi-Fi tracking, points of interest nearby, and the recent innovation of iBeacons.”

There are at least two key takeaways for marketers from this study, as far as I can see.

First, data-driven is most definitely the way to go. Companies that are approaching digital marketing with a technical focus on data and optimization are, simply said, beating the competition. Companies that aren’t are spending more and more advertising and marketing dollars for less and less return, which is clearly an existential threat.

But the second is that it is not easy.

Clearly, from the data that Adobe captured, there are many, many marketers who are trying to go data-driven and failing. In many cases the differences in investment and focus between the best and the rest does not appear to be that significant, which means that it’s not just that you’re investing in optimization and other conversion improvements, it’s what you’re doing and how you’re doing it that matters.

Which means that digital marketing is not just something for companies to throw money at. It’s a core competency to engrain in your DNA.