MENLO PARK, Calif. — Facebook is working to increase its reach throughout the world, including emerging markets. To do that, it has increasingly become mindful of connectivity speeds and modifying its tools to make sure that it can reach the next set of users slowly coming online.

But as more people, and businesses as well, begin to jump online, Facebook has unveiled a new advertising option called Slideshow for brands to reach these new users no matter the device, connection, and where they are.

Building for the next billion people

At a whiteboard event at the company’s Menlo Park, California headquarters, chief product officer Chris Cox spoke about how Facebook has evolved to target the next billion people coming online.

“The story of [Facebook] for the last 10 years has been about breaking barriers for the next people to use [the social network],” Cox said. “It started with letting high school students join, then letting adults join, then letting people who didn’t speak English join … what we’re trying to do is get the empathy inside the company to really appreciate that the people we’re building for look less and less like us, and it requires a different level of discipline and commitment to understand why people are coming to Instagram, Facebook, and Oculus — one day.” 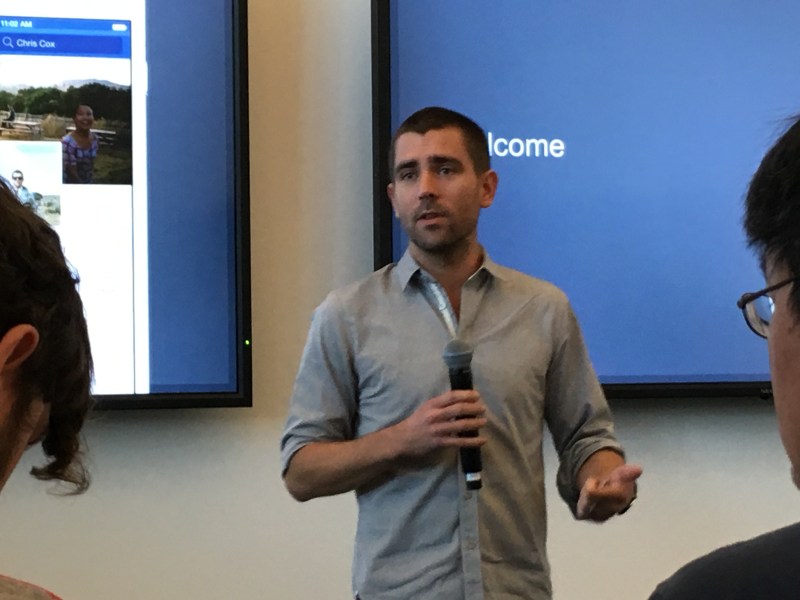 Much of the company’s focus will likely be on India, where Cox said a third of the next billion to come online will come from. The country also suffers from low connectivity, as many farmers and potential users in rural areas are using the Internet on 2G speeds. This illustrates why Facebook chief executive Mark Zuckerberg visited India earlier this week and why he’s focused on the country.

One of the major tenets that Facebook sought to emphasize is that it’s thinking about how to help brands and consumers better connect with each other. This means more than just letting big companies target new Internet users — it also means helping small businesses in emerging markets who want to broaden their reach.

With Slideshow, advertisers can create a video ad just by using 3 to 7 still images. These photos can be from an existing video, a photo shoot, or even stock images from Facebook’s library. All videos will be between 5 and 15 seconds.

Nikila Srinivasan, Facebook’s product manager for emerging markets, explained that when the company starting thinking about 2015, her team looked at a few trends: video is booming, and more people are coming online. What’s more, Facebook users are watching at least 1 video on the social network, so there’s good reason for businesses to tap into this media. The problem is that it won’t necessarily produce the same experience for everyone because of their connection speed. Srinivasan said that small and medium-sized businesses need “an easier, cost-effective way to create video assets,” and this is what Slideshow aims to provide.

According to Facebook, early testing demonstrated that a 15-second Slideshow results in a file size one-fifth the size of a video of the same length, which makes it more accessible for those on 2G or 3G connections. This option is being rolled out over the “coming weeks” within the Power Editor and Ads Manager.

Some examples of brands using it include Coca-Cola, which took one of its videos and created a Slideshow ad format. Facebook said that resulted in a doubling the company’s expected reach of 2 million people and a 10 percent increase in ad awareness.

There’s definitely a need to reach emerging and high-growth markets. Kelly MacLean, product marketing manager of ads for emerging markets, said that emerging markets consist of 85 percent of the world’s population, with 90 percent of people under 30. She said that some will be coming online for the very first time while being mobile-first.

And simply building something that works in one area isn’t going to produce the same results in others. Marketers have to accept the fact that there are genuine challenges when going after emerging markets, such as dealing with access and different devices, multiple ways of doing retail business, and localization. 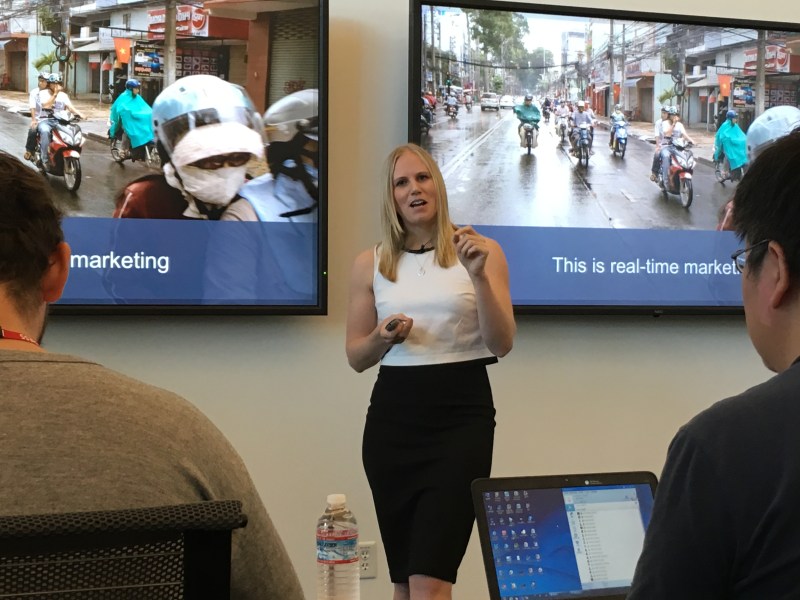 Concerning access and devices, people are worried about the cost of downloading data — it’s expensive in emerging markets, and there are countless variations of devices, whether it’s feature phones or smartphones. Also, when dealing with retail fragmentation, it’s difficult to track who’s coming in your store because people are paying with cash and there’s no CRM system in place. Lastly, with localization, brands and companies have logistic challenges and translation issues because one campaign doesn’t work for all.

But amid all this, MacLean seemed optimistic: “There’s incredible innovation, and people and businesses are using these challenges and turning them into incredible opportunities.”

Slideshows aren’t the first effort Facebook has made in creating ad campaigns for emerging markets — and won’t be the last. In March, the company debuted its Creative Accelerator, which partners with brands and agencies to produce results-driven creative in emerging and high-growth countries. “Small screens and slower connections are not barriers when we combine art and science on the platform,” Facebook explained then. 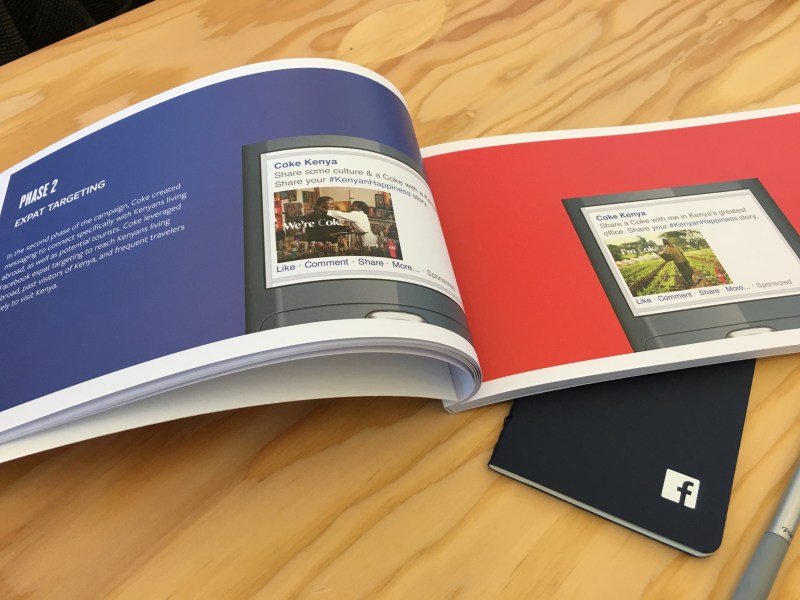 Connecting people with stuff that matters to them

Getting more people connected, both in terms of access to the Internet and meeting other people, are things that Facebook has been heavily promoting — it certainly works to its benefit to make sure these things happen. Of course it has its Internet.org initiative, which Zuckerberg recently said has helped give web access to 15 million people worldwide. But once you’re online, what’s the next thing you will probably want to do? Talk to others and make things happen, and Facebook is one of the perennial places for that to happen.

Tom Alison, Facebook’s engineering director of emerging markets, said that 240 million people have shifted their usage patterns to mobile, and the company has focused on delivering a product across different environments to address these shifts. He showed a map of the world highlighting usage of Facebook, and it revealed that most of the world is using the social network on 2G and 3G intermittent connections.

Earlier this month, the company detailed ways it has improved the Facebook experience for all users around the world, starting with the News Feed. It developed an open-source Network Connection Class to determine your connection speed, which will dictate how to serve the most relevant stories to you; content a user is looking at will be downloaded first, and only previously cached or downloaded stories will be shown if you have a poor connection.

More than just talking the talk about emerging markets, Facebook said that it’s walking the walk: The company gives employees a chance to see what running on a 2G data connection is like every Tuesday. In a post, Chris Marra, a product manager focused on emerging markets, wrote:

People are coming online at a fast rate in emerging markets. In most cases, they are doing so on mobile via 2G connections. But on a typical 2G network, it can take several minutes to download a webpage. That doesn’t make for a great experience when sharing content with friends and family. To build for a global audience like ours, we know that we need to design features that work seamlessly even on a 2G network.

To that point, the company has developed applications that don’t necessarily have all the bells and whistles, but will still provide hopefully the same experience to those who don’t have access to 3G, 4G, or even LTE speeds.