Google is launching a new tool that connects advertisers directly with consumers over SMS through ads in Google Search.

The internet giant has been testing the “click-to-message” ad message extension for several months already, but it will soon be ready for prime time, with a broader rollout arriving in the “coming weeks,” according to Amit Agarwal, Google’s senior product manager for mobile search ads.

Given that message extensions rely on SMS, they are designed to only show up on devices that are capable of sending text messages — so this is a mobile-only offering. With that in mind, advertisers wishing to use message extensions must have a phone number that’s capable of receiving and sending SMS.

Setting up message extensions is relatively straightforward for those already familiar with AdWords and entails entering a few pieces of additional information under the Ad Extensions tab in AdWords. Once you’ve done this, customers searching on Google who use keywords that a company is already paying to be aligned with (.e.g. “hotel in New York”) will now see a little message icon alongside the ad.

When the customer taps this, their default SMS app will open with a pre-populated message — this message is configured in advance by the business through AdWords, though the customer can, of course, edit this themselves to suit the nature of their enquiry. 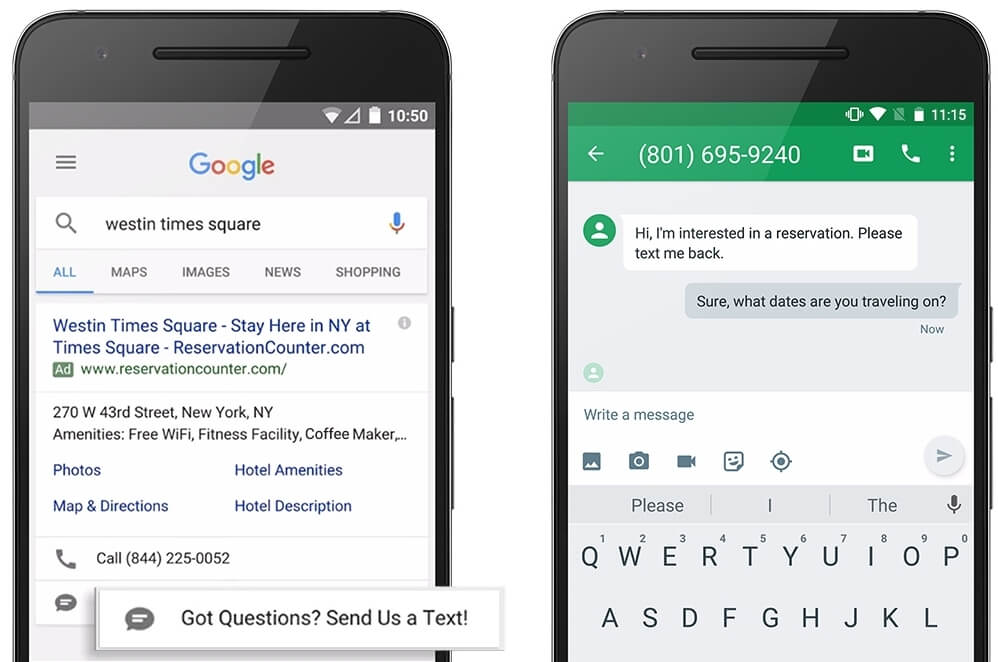 That Google is pushing mobile messaging as an extra channel through which customers can converse with companies isn’t entirely surprising. Indeed, it comes at a time when rival Facebook is ramping up its own Messenger app as a customer service platform and has previously revealed that it’s working on a similar click-to-message ad product. With more than a billion users globally, Facebook Messenger is a formidable force, for sure. But SMS remains a popular communications vehicle, too, with Pew research from last year suggesting that 97 percent of smartphone owners in the U.S. text at least once a day — and this may explain why Facebook recently opened up its Messenger app to serve as the default SMS app.

Still, mobile messaging apps are on the rise, and Google’s efforts here would no doubt be boosted by a real-time internet-based platform — like Messenger — that’s capable of showing not only that a message has been received but also that the recipient is currently typing a response.