Google released a new version of its Google Analytics product this morning, adding new features and bringing in existing offerings that previously worked separately. Marketers can use the suite to track and respond to their customers more seamlessly than ever before. Above all, it’s a response to the growing threat by Facebook.

In the past year or two, Google had already released several of the features of what today is being branded Google Analytics 360 Suite. But the new release debuts several new features, including most significantly what appears to be a data management platform (DMP) to manage user profile data across a company’s site — a critical tool for large companies. This is where Facebook has come on very strong, particularly in the explosive mobile advertising market.

Google has brought these features into one place, giving enterprise-size marketers a much more powerful feedback loop: These marketers can now get data about customers coming to their site and respond more easily in real time with content that is specialized for those visitors.

With the new features, Google also appears to be encroaching on the territory of several big players in the enterprise data cloud or DMP space — for example, Oracle and Adobe. It also steps into A/B testing, where Optimizely is dominant, and data visualization, where Tableau has seen tremendous growth.

Google’s moves are significant, because it has the advertising reach and infrastructure scale to undermine many of these other players. Google said it’s applying the same infrastructure that allows it to handle billions and billions of daily search queries — generating answers before users even finish typing — to give enterprise marketers similar functionality. In this case, it means allowing marketers to provide their customers with the content, offers, or products that users are likely looking for, based on those customers’ past behaviors.

The move is also significant because Facebook continues to grow in mobile, now threatening Google’s longtime dominance in display advertising. Google has chugged along with many of its analytics products for years, but has never pulled them together to offer a powerful suite for marketers.

Jon Cifuentes, an analyst at VB Insight, VentureBeat’s research arm, agreed: “Google is above all a marketing and advertising company — with channel dominance in search, email, display — with mobile and display threatened for the first time in years with Facebook, especially around mobile. It makes sense for them to beef up audience tracking.”

Google cited Pawan Divakarla, who leads analytics at Ohio-based Progressive Insurance, as an example of the suite’s significance:

“The Google Analytics 360 Suite gave us the really big ah-­ha moment. When we launched our mobile app, it provided insurance quotes. But after looking at the data, we saw people were attempting to buy insurance. So, we shifted our mobile strategy to offer ecommerce. Google gave us that insight,” Divakarla said in a canned quote in Google’s announcement.

The new suite certainly rivals Facebook in terms of tracking people across devices and channels. But more than that, it integrates with other products like AdWords, DoubleClick, and third-party platforms through an API.

One thing that is clear: This is an enterprise-grade product, and is priced as such. The existing product, Google Analytics Premium, has been priced at $150K/year, and Google acknowledges that this is the fee you’ll have to pay for one of the main products of the 360 suite. But you’ll have to then pay for additional products a la carte, and associated fees with increased usage, features and services, Google spokesman Joe Osborne told VentureBeat. 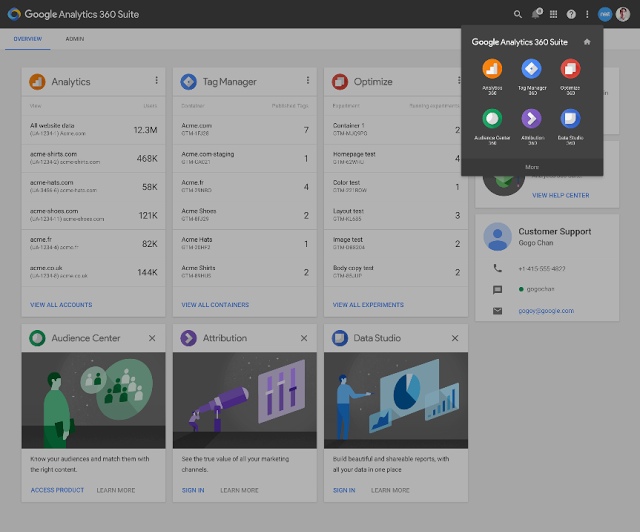 The suite comes with the following six products. The first four are brand new, Google says. And if some of the details on these are vague, that’s by design. Google purposefully didn’t release details on many of these.

This data management platform (DMP) helps marketers understand their customers and find more like them across channels, devices, and campaigns. It offers native integration with Google and DoubleClick, plus it’s open to third-party data providers and DSPs.

Significance: This could be the strongest update of the announcement. Facebook launched its Atlas product last year, built on social profile data that’s become hugely valuable. Google doesn’t have the profile data that Facebook has built, and it’s clearly been threatened by becoming an underdog in user data for the first time. But Google does have dominance in search traffic and data, and its Android platform is the biggest operating system in mobile. Finally, it has Gmail, through which it can build audiences and segments to be marketed to.

When it comes to impact on Adobe or Oracle, that remains to be seen. Google is a marketing and ad company, Adobe is a content-focused company, and Oracle is trying to serve enterprise with everything. There are overlaps, but each offer different use cases. With this announcement, Google is definitely getting more competitive for enterprise customers.

This website testing and personalization product helps marketers deliver better experiences. Marketers can show consumers multiple variations of their site and then choose the version that works best for each audience.

Significance: At first, this may look like a rebrand of Google Experiments, which helped people track analytics behind different A/B test pages. But that was done essentially through a tag, in a very manual way. Optimize does all of the work of setting up a real A/B test from end-to-end. You can literally drag comps of a site (without needing to know coding) into the product and test them out with live users.

By adding this feature and the Data Studio feature below, Google could be taking a lot of work away from A/B testing tools Optimizely and other personalization tools. It’s also incorporating customization and data visualization — creating a seamless stack that could spark consolidation in the industry. Visualization of data is very difficult to do within Optimizely. And if you have to switch to a tool like Tableau for data visualization, that becomes yet another piece to connect to your product stack. Why bother, if you can get it all from Google?

Having multiple tools from many vendors can also affect your IT development time, and even stability: If one tool goes down, and other tools that are dependent on it also go down, it’s often hard to find the cause of failure.

This new data analysis and visualization product integrates data across all suite products and other data sources — turning it into interactive reports and dashboards. Built-in real-time collaboration and sharing is based on Google Docs technology.

Significance: Marketers will find Data Studio helpful because they need to constantly make data imagery for briefings, reports, and decks. Google hasn’t done this before. In some ways, the product looks like a competitor to Cyfe or Geckoboard. Data visualization dashboards are hot right now, and a lot of innovation and venture dollars have been invested here. This could spell trouble for some of the newer entrants. The question is whether the new Google visualizations are deep enough to seriously affect a player like Tableau. This is something we haven’t looked at yet.

Built from Google’s tag management product, this offers enterprise marketers a simplified way to gather site information (all those tiny bits of code) and powerful APIs to increase data accuracy and streamline workflows, to allow them to move faster and make decisions with confidence.

Significance: This was based on a small feature in GA, but was never a fully built-out and standalone product.

Google said it will roll out “exciting” new capabilities throughout the next couple of months as investments continue to grow. Sources are telling VentureBeat to wait until Google’s I/O event for more news. GA 360 will serve as the measurement centerpiece by analyzing customer data from all touchpoints and integrating with its ad products to drive marketing effectiveness, Google said.

Significance: This is really just a rebrand of GA Premium — not much new here. But Google really is the king of analytics.

Google says this has been rebuilt from the “ground up” to help advertisers value marketing investments and allocate budgets with confidence. Marketers can analyze performance across all channels, devices, and systems to achieve their most effective marketing mix. VentureBeat’s understanding, though, is that Google still heavily relies on Tune and Kochava for some mobile attribution capabilities. Google’s main strength has been attribution for display advertising.

Significance: This is just a rebrand of Adometry. Nothing new here.