You have nothing to lose — and everything to gain — by localizing your app to be more aligned with local culture and preferences. Get it right and you can massively extend the reach and appeal of your app without spending a bundle.

It’s why VB Insight’s forthcoming practitioner’s guide, which draws on 35 interviews with ASO professionals and an informal survey of over 500 ASO users, features case studies and actionable advice around the ways app developers and companies can get the most out of this opportunity. Ensuring your app ranks high and appeals to local tastes, rather than offends them, is key.

But before you get down to the work of optimizing and localizing the most important aspects of your app to be more aligned with culture and preferences in your target countries, you need to double-check whether it’s worth the effort. Even though there is a strong consensus that localizing all aspects of your app store presence is one of the most inexpensive ways to increase revenues and market share, it pays to pace yourself.

Localization starts with translating the language of the app and extends to translating all the other elements (keywords, description, icons, images, video, keywords, and even the name of the app) to be a tight fit with your target audience. And, if you plan to take payments or engage in commerce, do your homework and adapt your app to local regulations and payment methods to avoid any legal and regulatory battles further down the line.

It’s a complex task where the right mix of talent and tools can make a massive difference. Choose tools that provide keywords optimized in several languages, and work with native speakers who naturally have a deeper understanding of language nuances. This helps you zero in more quickly on the keywords users prefer when searching for specific apps and “sanity-check” potential high volume search terms for which your particular app could rank.

However, this advice differs slightly from our survey results, which show nearly half prefer to go it alone — while one-third buy into vendor tools. 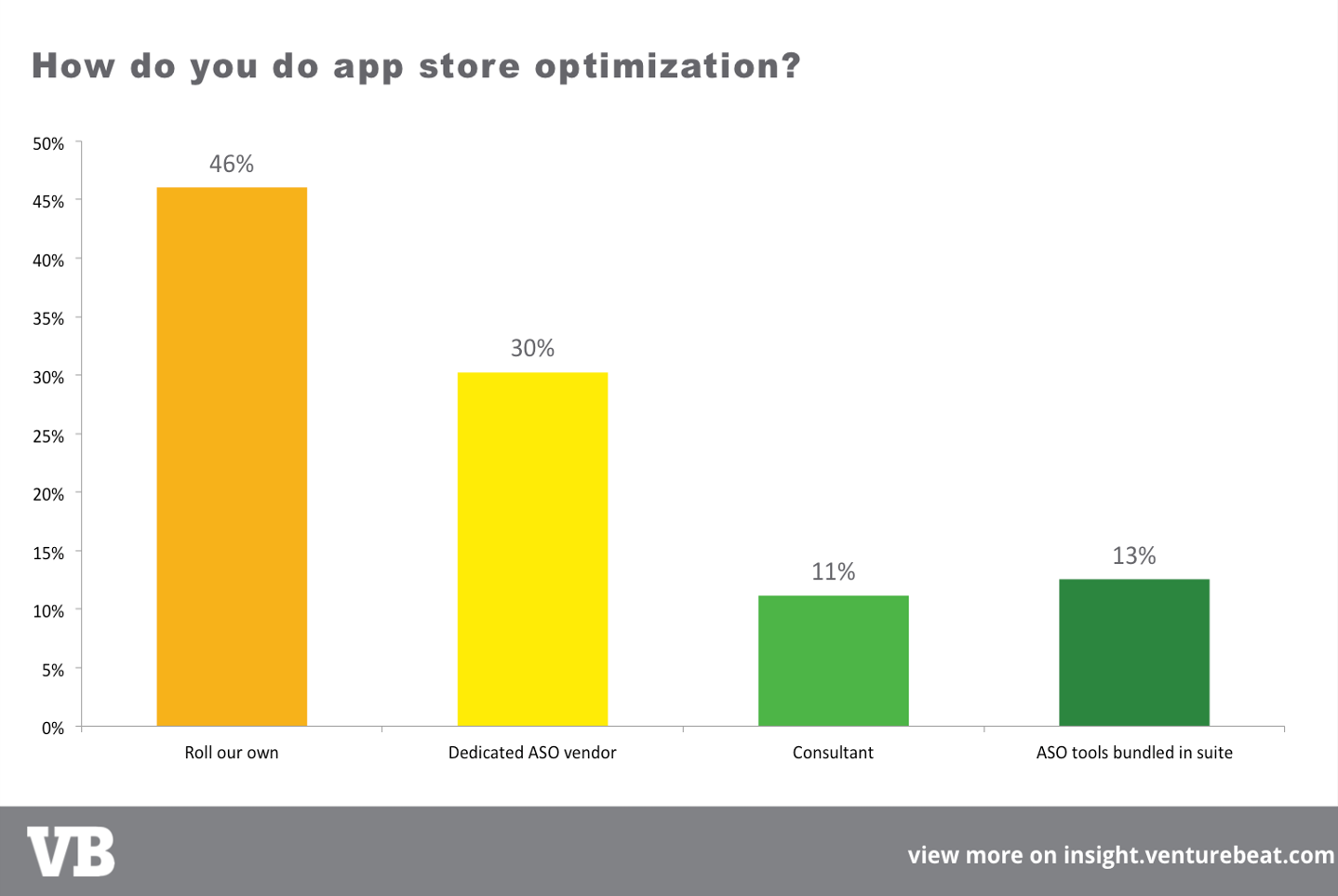 The gap closed somewhat when we asked respondents to detail the impact of ASO services and report the uplift they achieve.

ASO expert Steve P. Young over at Appmasters says his clients have seen results of up to “a 10X increase in downloads” just because they localized their app. In his view, it’s organic growth that every app developer can afford to tap for their app. The key is to take the right steps in the correct order.

If you don’t know what you’re aiming for — or the right countries to target — then start with just your app name and keywords and localize them for popular countries like France, Italy, or Spain. “If you see a bump up in downloads,” he says, “then move on to localize the description, and then to other marketing collateral like screenshots.”

Read between the lines and you’ll see there is no reason to localize every aspect of your app from the get-go just because you can.

Test the waters with keywords. Then use tools to check what kind of traffic volume those keywords are getting on the local level. After that, and in countries where it’s clear your app is taking off, you can focus efforts on localizing every single aspect of your app.

As a rule, Laurie Galazzo — inbound marketing manager at AppTweak, a Belgium-based startup providing app marketers a multilingual keyword tool tailored for six languages, with more in the pipeline — recommends app developers and companies aiming to localize their ASO start with the app title, keywords, and description (and in that order) before making the effort to localize the entire app.

And by the whole app, she means everything — including app metadata, screenshots, previews, and videos. Once you’ve done all this, then the way is clear to make an entirely new release of the app (localizing the entire app experience) and check the metrics.

“Wait a couple of weeks and if you notice a massive increase in app downloads or higher LTVs, it means that you’ve most likely well chosen your target and have great ASO,” Galazzo explains. If the metrics don’t show an uplift, then it’s a sure sign that you either need to work harder at your ASO or choose another target market — or both.

This is the same blueprint Bart Verschueren and Vincent Vandegans, who founded eRowz, followed when they mapped out soft launch plans for For-sale.co.uk, the app they created (and specifically named) to build on the success of their website, www.for-sale.co.uk, which allows people to buy and sell second-hand goods.

After launching to an enthusiastic audience in France, the company founders noticed app fans springing up in nearby U.K., a sure sign that they should localize their app to take advantage of the opportunity there. Teaming up with AppTweak allowed them to define a localization and ASO strategy, starting with finding and tracking keywords in English, the target language they chose to get more mileage out of their app organic installs.

Localizing their app as part of a wider ASO strategy brought the company new users, more downloads and achieved higher retention and engagement rates. Specifically, they saw a “33 percent increase in app installs” and a 16 percent increase in the number of sessions. As Verschueren put it, “The increase in sessions, plus an amazing 14 percent increase in active devices, indicated we had succeeded in increasing our app ‘stickiness,’ as well as the frequency of active use.”

Based on this appeal, the company has expanded its ASO and localization strategy, allowing it to launch and target users in a total of 10 countries, including Belgium, Brazil, France, Germany, India, Ireland, Italy, Spain, U.K., and the U.S.

Whether you choose ASO tools or rely on in-house talent, it’s clear that localization, as part of a wider ASO and app marketing strategy, is a great way to get the attention of users in the major countries where you see a potential for your app. The right approach can boost your brand and visibility, and bring new life to your app.

The ASO practitioner’s guide will be launched in April. All Mobile Summit 2016 attendees will receive the guide — valued at $499 value — without charge.