Go on. Take a moment for yourself. Why not sit on the beach, sip a piña colada, and just enjoy the view? That was, after all, the promise of running an ecommerce business — doing little to nothing while your website makes money for you in the background.

In reality, we don’t need a study, survey, or report to tell us that’s not how it works. Ecommerce, even for small businesses, is hard and time-consuming.

Fortunately, this is the 21st century, a time when artificially intelligent machines and apps are rising up to help us. Sure, they’ll eventually take over the world, and we humans will be used as nothing more than batteries, but let’s enjoy it while we can.

Kit CRM represents the new breed of artificially intelligent virtual assistant, and today the bot that runs your ecommerce business via SMS text messages is introducing an API that extends its reach beyond emailing customers, running Facebook ads, and managing Instagram-sponsored photos.

“The goal here is to create the ultimate employee that goes beyond marketing,” Michael Perry, CEO and founder of Kit CRM, told me. “And if our focus is on building that virtual person, we need others to help us add relevant skill sets.”

In fact, all joking aside, this is a significant step in the evolution of AI and its ability to help small businesses survive. Kit is, essentially, providing an expert in various fields of marketing and ecommerce management for the price of a daily coffee — an ‘assistant’ that you command from almost any mobile device.

But that’s just the beginning.

Since Kit is now offering an API, future connected apps will be able to provide functionality beyond the core of Kit’s original, ecommerce-focused intention. And they can do that in an environment run via SMS, which opens up a large portion of the globe. Kit currently has SMS infrastructure in place in 20 countries and works in tandem with five commerce platforms.

The launch partners using Kit’s API are Bold, ShopPad, New Leaf Labs, Yotpo, and Shoe Lace, each of which adds additional functionality to Kit’s existing capabilities (a subject we’ve covered at length before). So how does it work in practice?

Let’s say Kit is monitoring your sales and inventory levels, and it notices that two of your lines aren’t selling. Because Kit shares data with Bold via the API, Bold can work out the discount levels and durations required to spark interest. Kit sends you a text message asking if you want to apply Bold’s discount plans. If you reply ‘Yes,’ the sale begins.

That’s when Kit takes over again. It will work out how to promote that sale and will, for example, offer you the chance to build an ad that pushes the suggested discount to Facebook. Another ‘Yes’ via SMS, and an advert, which Kit shows you as a preview, is up and running.

Three text messages from Kit and two short replies from the user are all it takes to orchestrate a two-week discount and run an advertisement to promote it.

“The Bold apps integration is on of my favorites,” Perry said. “This is an amazing example of Kit killing two birds with one stone.” 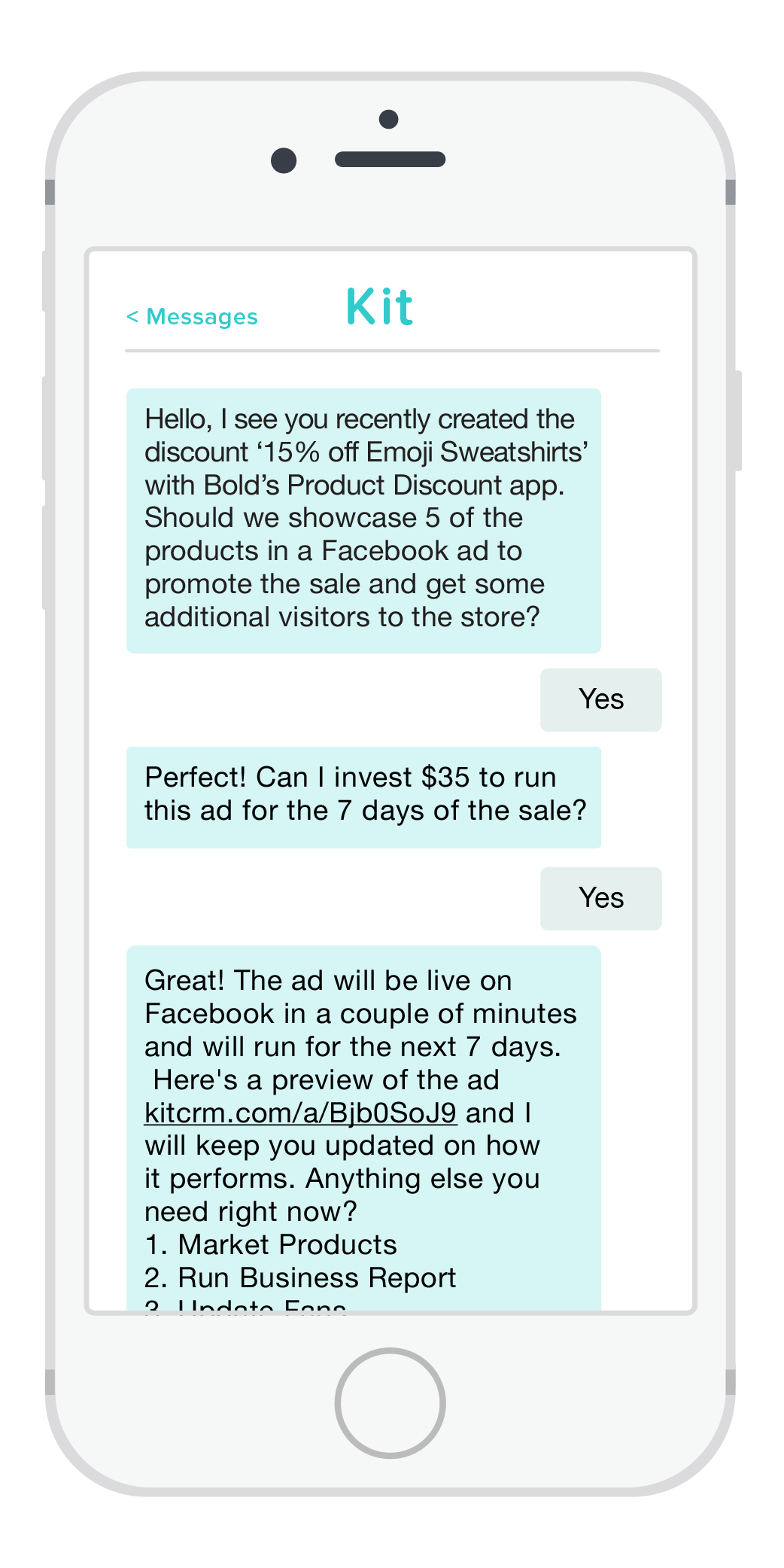 Of course, there is one inherent problem with opening a solution like Kit up to a range of other systems. With every partner added, you add complexity and the possibility that the advice from one system unravels or contradicts the information from another.

“You’re right,” Perry said. “You just can’t have four loyalty apps that are competing for time and attention. Initially, there are going to be some baby steps, including only launching one partner for each major function at the moment. We’re traveling seas nobody has navigated yet, so we’ll have to build in some preference modifiers into the app ecosystem to ensure they aren’t stepping on each other.”

The other issue is maintaining ease of use. Kit’s primary selling point is that it helps you run your business via SMS and a few simple replies. If you now have to understand other apps, that could impact the solution’s low barrier to entry.

In reality, however, the way Kit integrates the partner apps’ data and findings means that it looks and feels the same as before. It is simply able to ask you more questions now. Of course, that won’t help you add the right apps to your Kit armory, so what does Kit have up its sleeve to assist with education, understanding, and knowledge of its wider ecosystem?

“At some point we’ll have some deep thinking technology that can give a gap analysis, and explain which apps are missing,” Perry said.

So Kit is expected to suggest the right apps based on your type of business and advise you which of those partner solutions would work best for you. Smart.

Kit’s new skills are available from today. All customers on the Pro plan, which starts at $25 per month, can augment Kit with each partner’s features and functions. Users will need to have accounts with each app they add, and some of those apps have separate charges or subscriptions.