There has been $17 billion in funding, spread over 313 businesses, generated within the marketing technology industry this year.

While that is down from last year’s impressive $47 billion total — which was distributed across 487 organizations — it is still impressive for a sector that has yet to find its footing outside of the Fortune 500.

Using data provided by VB Profiles — and by aggregating marketing technology product lists from ChiefMartec, LUMA Partners, VB Insight (VentureBeat’s research arm), and Gartner — we’ve pulled together the headlines from a year that saw big funding rounds from the likes of Pinterest, Snapchat, and Square.

(Full disclosure: VentureBeat has an ownership stake in VB Profiles — a collaborative effort between VentureBeat and Spoke Intelligence. Spoke CEO Philippe Cases is also chairman of VentureBeat’s board.) 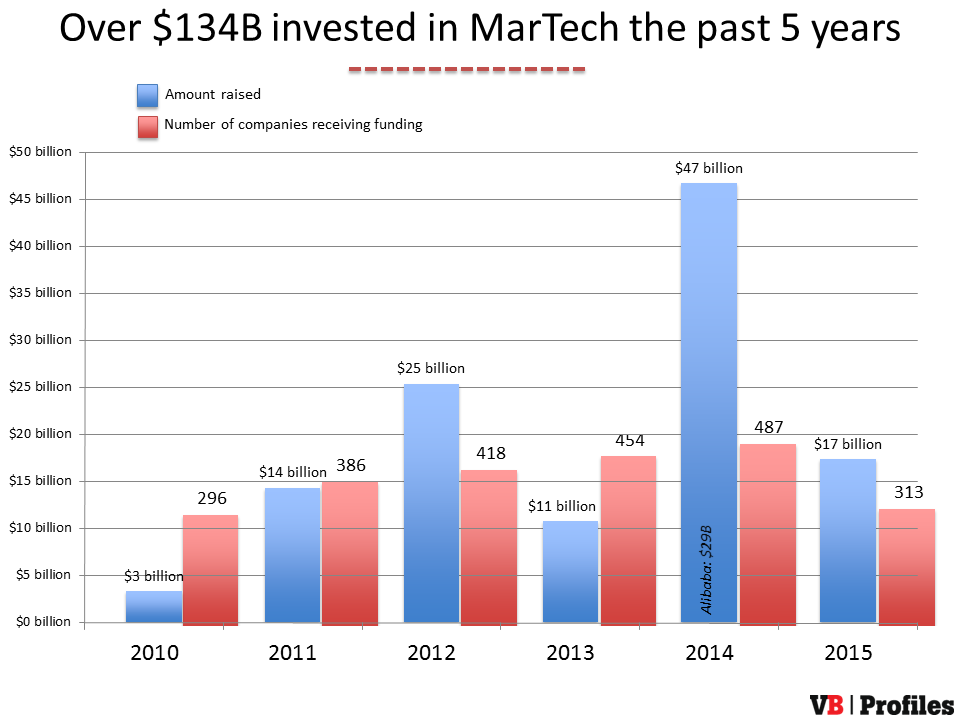 As in 2014, a huge number of marketing technology products have been launched. Our own internal lists show year-on-year triple-digit growth in the number of martech solutions since 2013. That list now stands at 2,500+ products, and yet the majority of the funding in the last five years — all $134 billion of it — has gone to the social networks that “house” prospective customers, such as Facebook and Twitter. 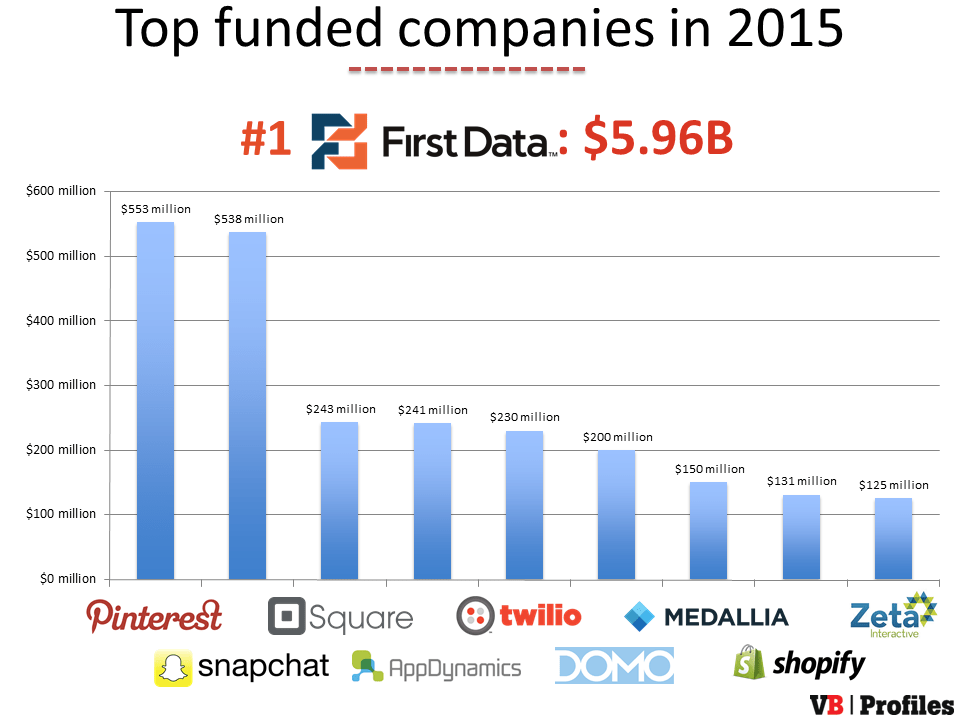 The big winners this year include First Data Corporation, which raised $5.96 billion. Pinterest and Snapchat also won big, proving that new consumer environments are still a draw for investors. Square, AppDynamics, Twilio, Domo, Medallia, Shopify, and Zeta Interactive make up the rest of the top ten.

And while Salesforce Ventures made the highest number of investments in martech this year — 16 in total — with similar commitments made by the likes of Sequoia Capital and Andreessen Horowitz (15 and 13 respectively), it was FirstMark Capital that invested the highest percentage of its total funds in the martech industry. Inovia Capital and Data Collective also invested the majority of their funds in the martech industry, which includes sales technology and adtech. 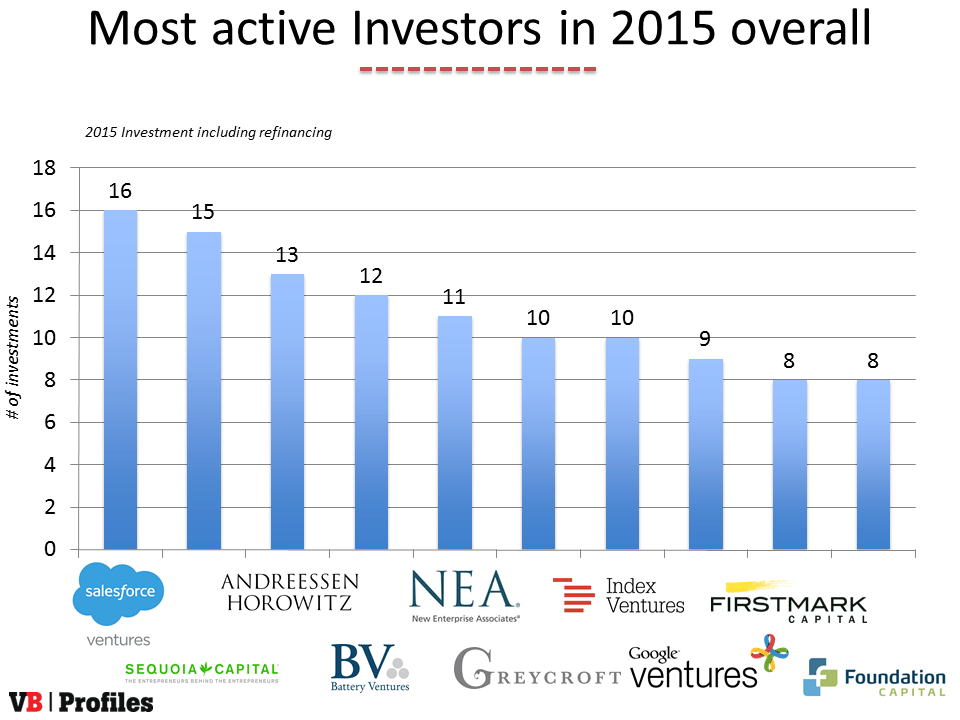 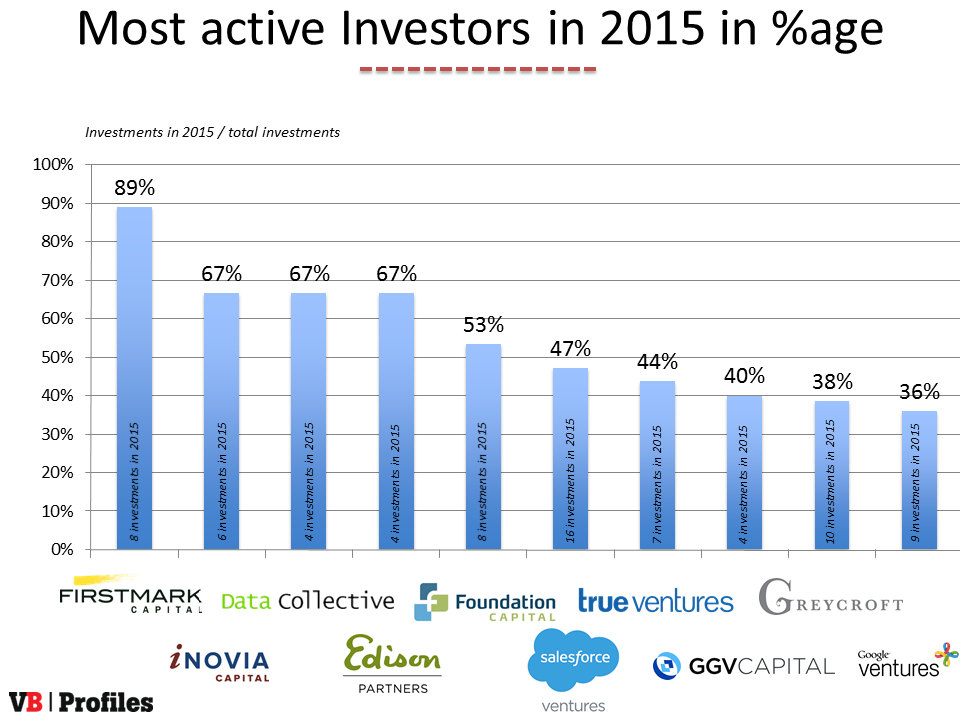 But what about the other side of the coin — the exits?

In 2015, we saw $87.4 billion in exits, including a massive IPO from PayPal. First Data, Informatica, AOL, Square, and Shopify were all involved in an IPO or acquisition. Notably, Constant Contact was acquired for $1.1 billion, furthering the suggestion that email — which we know to be the marketing channel with the highest ROI, even today — is still a big draw. 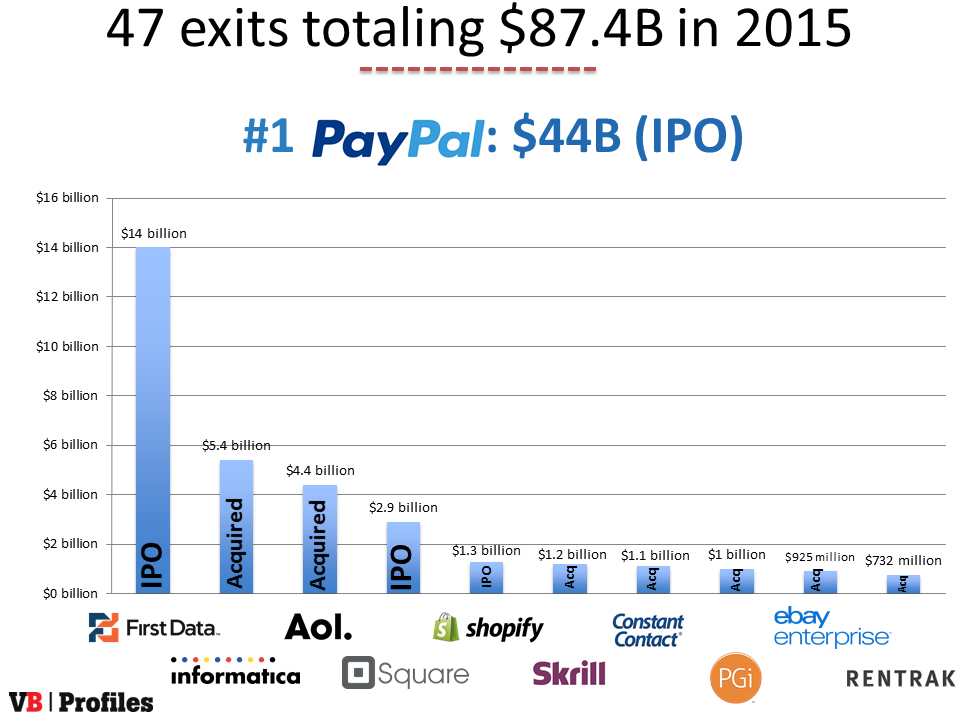 2015 was an exciting year for marketing technology. While investments were lower than last year (even if you remove 2014’s Alibaba deal, on the basis that only a percentage of its business is in the marketing technology sector), and exits were significant, the space continues to grow in both new products and improved penetration at mid-sized and larger company levels.

What will 2016 bring? More products and higher levels of fragmentation? Sure. But we’ll also see a certain amount of consolidation, and the bar at which a company starts to use martech solutions will get lower. That’s good news for everyone, because when one martech domain — for example, conversion optimization — has an average ROI of 224 percent, the question shifts from “Why is martech such a complex space?” to “Why aren’t I using it?”