When it comes to paid advertising on social platforms, YouTube is the clear winner in introducing new products and helping consumers make their purchasing decisions, according to a new study Aol Platforms released today.

The report, which analyzed data found within 500 million clicks and 15 million conversions during the first quarter of 2014, tracked social purchase interactions through Convertro’s attribution technology. This then determined which platforms had affected online sales and at what point in the purchasing decision they had influence on the consumer.

“We believe that YouTube does well in both of these important purchase funnel areas for a number of reasons,” Jeff Zwelling, CEO and co-founder at Convertro told me by phone this week. “YouTube’s own search volume and preferential positioning on Google’s results help drive large amounts of traffic, of course. But when you get to YouTube, the content is rich, descriptive, and usually helpful.”

“I’ve done this myself. I recently bought a coffee machine. I had the decision down to three alternatives and couldn’t decide which one was best for me,” Zwelling said. “In the end, I watched videos on YouTube of people using all three machines and chose the one that matched my idea of a good coffee maker.”

There are multiple touch points within an online purchase where social platforms have an effect.

Being introduced to a product via social media is considered the ‘first’ stage of the purchasing decision. The ‘middle’ of the buying cycle is where consumers may see re-targeting ads or other marketing efforts to drive them back to the product they were initially interested in.

In the ‘last stage, consumers will often search for the product they’ve been introduced to in the first stage or that they’ve researched or been re-exposed to in the middle and are now ready to buy. Importantly, though, consumers don’t follow this path in a linear fashion — purchases are made at all stages of the process. 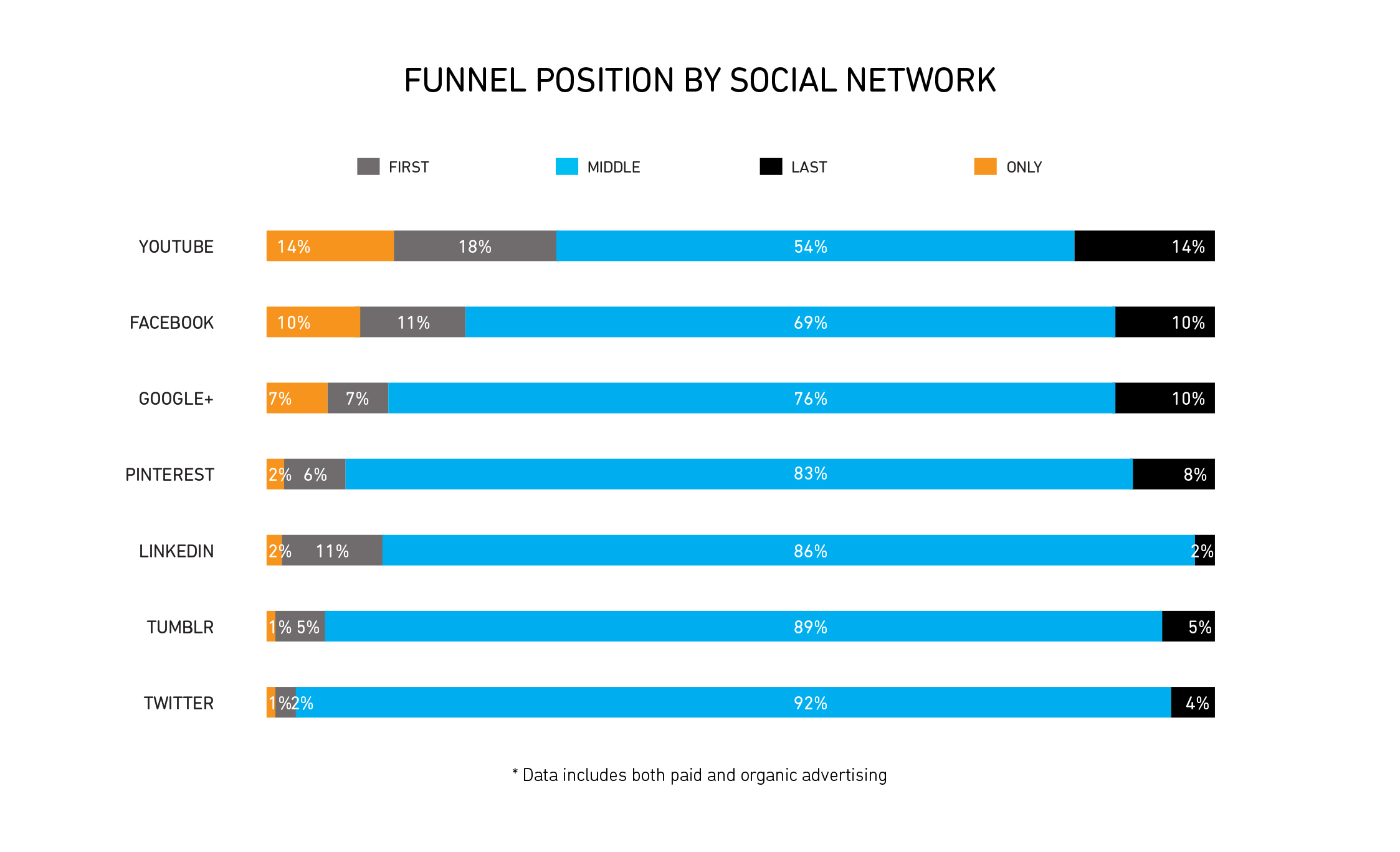 What Aol Platforms’ study shows is that YouTube is strongest at both introducing new products and helping to close the sale in the last stage. Facebook is the second best platform for introductions and purchases, with Google+ coming in third. Interestingly, we’ve noticed YouTube’s brand strength for advertisers in the mobile app space as well.

We’re studying return on investment in social media
Share your knowledge, and we’ll share all the data with you in return.

Twitter shows up as the worst platform for product introductions, nine times less effective than YouTube. It is also worst in the last stage of the buying cycle but incredibly strong during the middle phase.

“Throughout our study, it is clear that social media in general — and Twitter in particular — is much more likely than any other marketing channel to provide the customer with brand awareness and consideration of a product,” Zwelling said.

Of course, not all purchases follow any kind of path or funnel. If you see a tweet that tells you about a product and you buy that directly from that tweet, with no other social interaction, marketers consider that purchase being marked as ‘only’ coming through Twitter.

In particular, the study shows a staggering difference between paid and organic tweets when related to ‘only’ or ‘first’ stage sales.

As we know from recent studies, 99% of organic messages get almost no interaction on social media. Aol Platforms’ report backs this up, showing that only 1% of organic product-promoting tweets lead to a direct purchasing decision. But what happens when you sponsor a tweet?

On Twitter, paying for a tweet means that it is 30 times more likely to lead to a direct purchase with no other interaction or research, and over five times more likely to result in the introduction of a product to a new customer. Promoting tweets also helps in the last phase of the buying cycle with an increase of three times the conversion rate.

“This is probably due to the way sponsored tweets stay high on the stream when looking at Twitter on the website or through third-party clients,” Zwelling said. “Because the paid-for message doesn’t disappear quickly in the stream, unlike regular tweets, your followers are more likely to see it and interact with it.”

The study shows similar results with sponsored messages on Facebook and Pinterest. Across the board, the data tells us that paid social messages lead to 25% more conversions than organic output.

Of course, some of this will be due to the ever-reducing organic reach of business updates on platforms like Facebook. For those social outlets, paid messaging is fast becoming the only way to get noticed.

Not all products or services perform the same, according to the research. Subscriptions fare much better on social media than technology products, for example. In fact, paid social media messages had the worst customer acquisition and sales impact on food, beverage, apparel and accessories products — organic social drove far better performance for these categories.

The full report is available for download without charge, although you will be asked to offer up contact information in return.