Amazon has launched a new Streaming Partners Program that will allow Prime members to add additional video-on-demand (VoD) subscriptions to their annual membership.

Today’s news comes two weeks after rumors first surfaced that Amazon was planning to boost its own Amazon Video offering with additional third-party services. Now, things are a lot clearer. We know who the initial content partners are, and they include streaming providers across indie movies, TV shows, documentaries, and more, including Starz, Showtime, Smithsonian Earth, and Comedy Central Stand-Up. 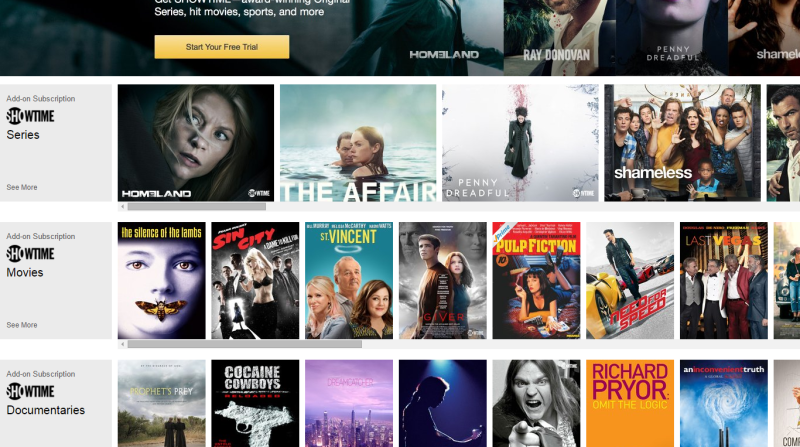 While the standard Prime subscription, which costs $99 per year, includes access to Amazon’s own Netflix-style library of movies and TV shows, additional packages such as Showtime and Starz can be procured through a Prime membership for $8.99 a month.

The partnership makes sense for both Amazon and the third-party providers. With so many online video services available, it can be hard for those outside the top 3 or 4 to gain mindshare. By signing up with Amazon, networks stand a better chance of being discovered, as Amazon does all the customer acquisition and retention spade-work.

Moreover, it circumvents another growing problem, so-called subscription fatigue, whereby consumers become overwhelmed by the number of different subscriptions debited from their bank accounts. Centralizing everything through a single Amazon account simplifies the process and makes things easier to monitor and manage.

But more than that, Amazon is deeply integrating the various VoD services into a single account. This means users can create a single watchlist for all their subscriptions, search for content across the board, and also use Amazon’s neat IMDb X-Ray service to identify characters and other contextual tidbits in all shows — this is the first time Amazon has made X-Ray available to other networks.

Both Netflix and Amazon have increasingly turned to original content to help differentiate their services. But it’s expensive and impractical to base their entire service around that, especially when third-party content providers are starting to feel the squeeze from online streaming companies’ success — Netflix’s recent shares debacle is testament to that.

Amazon has pulled off a smart move here by making friends and weaving other third-party services into the mix. Ultimately, it’s about giving consumers more reasons to sign up for its annual Prime membership, while keeping other content-providers sweet. Amazon Prime already offers video-streaming, a music-streaming service, speedy delivery windows on goods bought through Amazon.com, and other perks. Now, it’s offering an extensive online entertainment hub for cord-cutters, too.