About 10 percent of all internet traffic is due to BitTorrent, which entertainment companies used to hate, considering BitTorrent the ungodly spawn of evil file-sharing demons. But a new file format from the global file-sharing king might just make BitTorrent their white knight in shining armor.

And make them a boat-load of money.

The new file format, launching on September 24, is BitTorrent Bundles, and it combines content and commerce — and community. Which means that Bundles is a file format built for sharing, and built to reward people who share … a file format designed from the bottom up, in other words, for the sharing economy.

And designed to turn pirates into customers.

Sharing is the new money

Because sometimes, sharing is a currency that bands like the Counting Crows and authors like Tim Ferriss are cashing in on.

Above: Mickey Hart’s brain-synthesized new music is on BitTorrent Bundles

“Instead of putting the content in the store, let’s put the store inside the product,” BitTorrent VP of Marketing Matt Mason told me last week. “We can bake interactions into the file itself, so that if something gets shared, it’s not a problem, but a driver of value for the artist and publisher.”

A BitTorrent bundle could include virtually any kind of media: a song, a video, a recipe, a book. Then it mutates depending on what a publisher, author, or artist wants to do with it. For example, an artist could release a new album via BitTorrent. Fans download it, and three songs are available for free. To access another, they have to share the album with someone else. To get yet another song, they need to like the artist on Facebook. And to get all the songs, they need to pay $3, $5, or any other amount to the artists, or as a donation to a cause the artist cares about.

The magic is that sharing is now money. Liking is now currency. And the artist has complete control over what actions are worth which rewards.

The Torrent can’t be hacked because the content’s not there until the pay gate — however you define “pay” — is crossed, and sharing is now a great thing, because any time the content is shared, the gate is too.

Innovative artists such as rap group Public Enemy and authors like Tim Ferriss (4-hour anything) are using the new Bundles format to distribute their art, as is Linkin Park and the Mickey Hart Band. A movie by Node Studios inspired by “the army of two” is available in a bundle, and the file format will soon be out of public beta and available to other content creators. 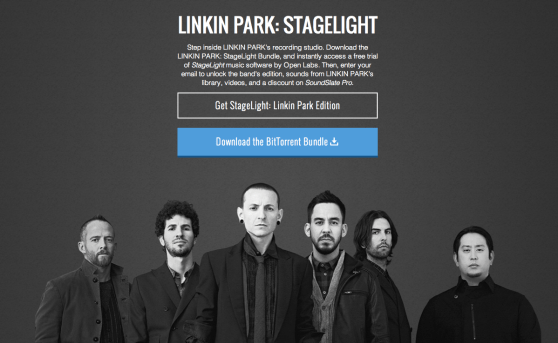 Which means if you only want to sell more songs on iTunes, you can build that into your BitTorrent Bundle. If you just want to sell more books on Amazon, you can build that into your Bundle. But if you want to build a following on Facebook, or followers on Twitter, or allow fans to pay whatever they want to pay right on your own website, you can do that too.

Mickey Hart, the drummer from the Grateful Dead is engaged in perhaps the most innovative use of the new Bundle format.

He hooked his brain up to a synthesizer via an Emotiv headset that captures EEG data and led 1,000 drummers in a wild and wacky two-hour-long musical session, which he then recorded in ultra-high-def 4K video, and is releasing the massive 278 GB file via BitTorrent. It’s called “Superorganism.”

“It’s the only publicly available 4K content,” Mason says. “Almost nobody can download this file and almost no-one can play it … but we wanted to do it as a proof of concept.”

BitTorrent sees Bundles as the future of content online, and a strike back agains the current segmented, divided sales model. 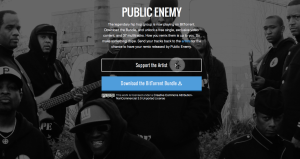 “Bundles are a series of experiments with bands and authors,” Mason told me last week. “Content is becoming very siloed, with walled gardens for music, for movies … it’s taking the internet from decentralized to something where there are a few very central nodes.”

That’s not really how content works online, he said, because the reality is that if something is published on Amazon or on iTunes, it’ll almost instantly be available on pirate sites too. Baking interactions into the file itself so if something gets shared, it’s not a problem, but a driver of value for the artist and publisher, is BitTorrent’s answer.

Which kind of makes BitTorrent a new kind of decentralized store, and begs the question of a whole new revenue model for the file-sharing giant, which moves more data every day than HTTP. What that looks like exactly, Mason isn’t yet sure. But he is sure that BitTorrent bundles, plus 170 million BitTorrent users, plus all the content that studios are now pouring into the new content + community + commerce file format will add up to some kind of lucrative business model.

And he has big plans.

“We want to be to file-sharing what Google is to search, and what Facebook is to social networking.”

And perhaps, to digital content sales what Amazon and iTunes are now to e-commerce.