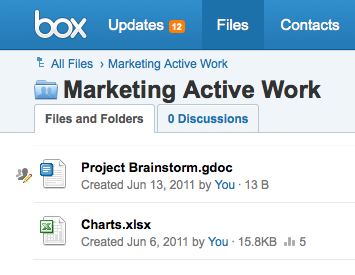 Cloud storage provider Box.net announced today that it is integrating Google Docs into its main web application, giving all Box.net customers the ability to create and edit Google Docs from within Box.net.

The company’s newest integration will allow Box.net customers to transfer Google Docs documents to and from their cloud storage units. Box.net user will be able to open Google Docs from within the Box.net application and share them with other Box.net customers in their network. All features available in a typical Google Docs account, including live co-editing and sharing, will be available through Box.net.

Besides Google Docs , the company gives its customers access to Netsuite for enterprise resource planning and Salesforce.com for customer relationship management. It’s different from a strategy run by other companies like Microsoft, which is trying to cram all of those different types of features into a single software package like Office 365.

Box.net already has rudimentary document editing built into the application. But that editing feature wasn’t designed to be competitive with Microsoft’s Office or Excel applications. Google Docs, however, is designed to compete directly with those applications, which is one of the reasons Box.net decided to integrate it into its service, the company’s chief executive Aaron Levie said. 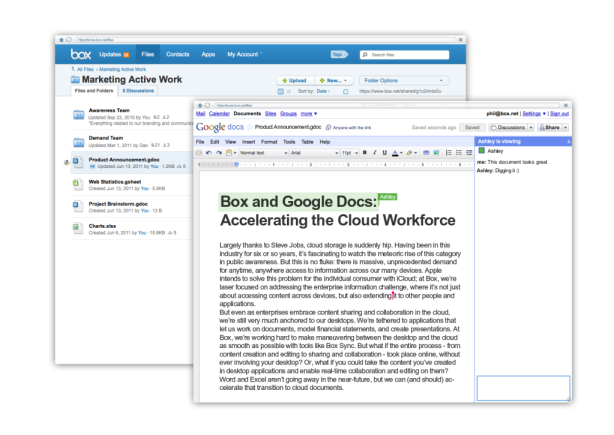 Box.net currently has 6 million users. Some 60,000 businesses employ its cloud-storage software, including 73 percent of Fortune 500 companies. That figure is up from around 66 percent in February. It raised $48 million in its most recent round of funding. Box.net is also expanding to a new office in the next several weeks because its staff has grown so much.

The company provides businesses with a way to store and share files securely over the web. The files are uploaded to remote servers where anyone with permission can access them. Employees can also edit the files through Box.net’s web-based interface and leave comments and notes.

Box.net has been pushing its cloud-storage application to mobile devices — particularly the iPhone operating system and Google’s mobile operating system, Android. As of January, the Box.net application was downloaded more than 250,000 times on the iPad. The company launched the Android application in the fourth quarter of 2010 and already has 70,000 downloads. Box.net is working with Samsung specifically to further develop its application on Android tablets like the Samsung Galaxy Tab.