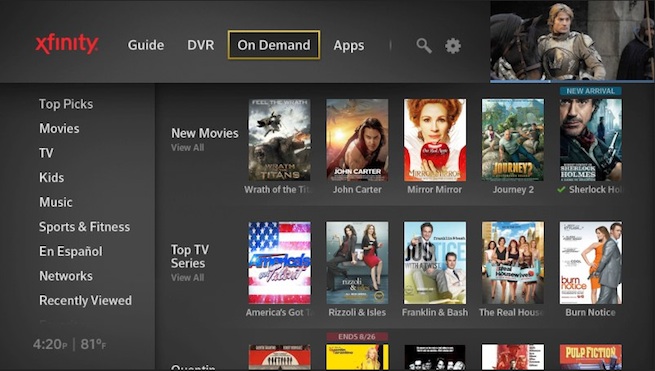 Comcast is finally rolling its new X1 cable/DVR set-top box for the Boston, Mass. market, with a handful of other major markets following soon after, the company announced today.

We first heard about Comcast’s enhanced TV service nearly a year ago, with the cable giant touting a new line of cable boxes featuring a brand new channel guide user interface, integration with social services (Skype, Facebook, Pandora, etc.), and the ability to update software without returning to the physical service center. Well, the X1 is that cable box, which promises an eventual end to the crappy UI and Playskool toy-like remote that’s currently being used the majority of subscribers.

The X1’s UI is very similar to the look and feel of Comcast’s Xfinity TV web services, which is good because there was quite a huge gap in presentation quality.

The X1 box will also interact with mobile phone apps that act as remote controls, which is similar to what Roku, Apple TV, and Boxee already offer to their customers. It’s nice to see Comcast finally taking notice. You’ll also be able to navigate what’s on the screen using the app’s gesture controls. Right now Comcast is only making an iOS app available, but I’m sure Android and others will follow as the X1 launches in additional markets.

Check out a gallery of screenshots showing off the X1’s slick new interface, as well as the new iOS remote control app.