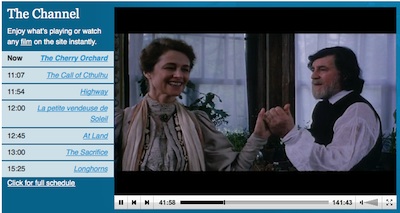 The Internet doesn’t lack for streaming movie services, but Dan Aronson, chief executive of San Francisco startup Fandor, said there’s room for at least one more. His company’s indie movie site is opening to the public in beta test mode today, and he described it as what would happen “if Sundance ran Netflix.”

In other words, Fandor is a site where subscribers can watch independent and international movies. We’re not just talking about movies that are showing at your local art-house theater. Yes, the site’s library includes relatively well-known films like Fallen Angels (directed by Wong Kar-Wai) and Funny Games (directed by Michael Haneke). However, Aronson said one of his goals is to create a place where people can watch movies that were made, maybe screened at film festivals, then never managed to secure a distribution deal for release in theaters.

Netflix’s library includes plenty of indie and international films, and through the Find Your Voice project it even funded an independent film of its own called The Wheeler Boys (co-written by my friend Max Doty). Aronson said Netflix is focused on securing better deals with the major movie studios and figuring out, “How do I get Transformers 3 tomorrow?” That’s a very different model than going out and signing up independent, undistributed filmmakers.

Fandor also includes strong curation and community features, Aronson said. The movies recommended on the website will be chosen by a professional film programmer, and the site will feature high-quality film writing, Aronson said. At the same time, members can write reviews and recommend their favorites.

For now, the site is offering a free one-month trial, then it will charge $10 a month for a subscription. The money is split between Fandor and either the filmmaker or the distribution company. Aronson said the company’s costs are low enough that it would break even with just 25,000 subscribers.

He added that Fandor is in discussions to expand beyond the website, onto set-top boxes and other devices. (That’s something Netflix has been pretty successful with.)