Parades, cookouts, and neighborly get-togethers are the quintessential components of any respectable Fourth of July celebration. But for most folks, Independence Day isn’t complete without a brilliant fireworks show to light up the night sky. More than 106 million people will attend one on the nation’s 242nd birthday, according to the National Retail Federation, and collectively, they’ll spend $1 billion this year on pinwheels, sparklers, and other pyrotechnic doodads.

To help peel back the curtains on one of America’s most popular spectacles, VentureBeat rang up Phil Grucci, CEO and creative director at Fireworks by Grucci of Brookhaven, New York. The 168-year-old company has produced some of this century’s most iconic shows, from the Statue of Liberty Centennial in 1986 to the Olympic Games opening and closing ceremonies in Los Angeles, Salt Lake City, Beijing, and more. It’s also a world record holder: Its New Year’s Eve 2014 fireworks display in Dubai included 479,651 shells fired from more than 700 locations in just six minutes, which translates to a rate of 1,332 fireworks per second.

Grucci spoke about the history of Fireworks by Grucci, the fireworks design process, and what goes into planning and setting up for the big show.

Historical records trace the Fourth of July firework tradition to 1777 in Philadelphia, Pennsylvania, where merrymakers staged a display over the city commons to commemorate the inaugural holiday. The colorful explosives caught on quickly, and by 1783, enterprising merchants were selling fireworks to the public.

The newly independent U.S. wasn’t the only country partial to pyrotechnics. Fireworks, which originated in 12th century China, were popular throughout Europe in the Renaissance and a staple at celebrations by imperialists like Louis XIV and Peter the Great. It was pioneering Italian alchemists, though, who engineered the first rudimentary commercial versions: tubes of powdered metals and charcoal set aflame. Later, they would improve upon the design by adding chlorinated powder and metallic slates such as strontium, which burns red, and potassium chlorate, an oxidizer that intensifies the hues of colors.

That’s where Angelo Lanzetta — the founding father of Fireworks by Grucci, as it were — came into the picture. The pyrotechnician opened up shop in Italy in 1850 and moved his firework business to New York 20 years later when he emigrated in 1870. Angelo’s son Anthony took over in 1923 and brought on his son, Felix Grucci, as an apprentice. Fireworks by Grucci has stayed in the family ever since — Phil Grucci, who assumed the role of CEO in 2013, is the fifth generation of Grucci sons. 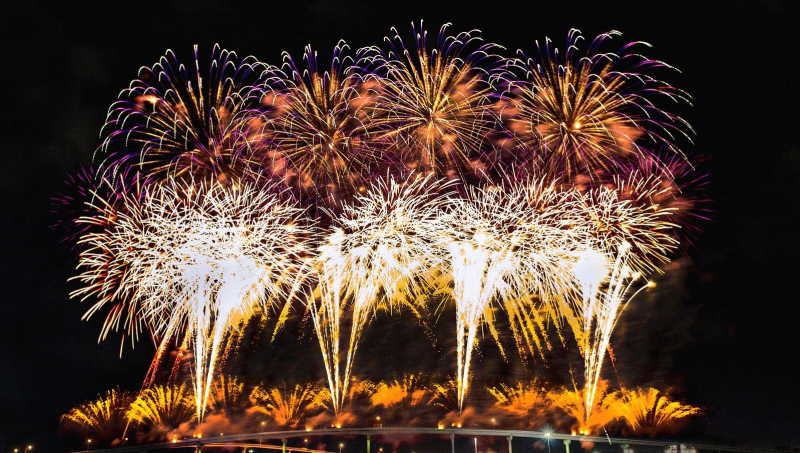 Above: Fireworks by Grucci at the Sir Sidney Poitier bridge renaming ceremony.

He fondly remembers his first fireworks show at Coney Island in New York, which his grandfather orchestrated.

“I was six years old … [and] too young to stay on the barge for the show, but I remember listening to a big radio with an antenna on it five feet long and watching the show,” he said.

Coney Island’s fireworks were comparable to the ones Lanzetta traded in, at least from a chemical standpoint. Much like fireworks today, the shells were made of plastic or paper and loaded in cannon-like tubes called mortars. Gunpowder in compartments at the bottom sent them flying into the air, and in the shell, time delay fuses ignited hundreds of bright-glowing explosive spheres.

Grucci learned at an early age that fireworks are equal parts art and science. “You have to have the appetite for it and a passion and love for the art form,” he said.

Every fireworks show starts with a design — that’s what drives the logistics and planning, and it’s when the concepts are created. Clients come with an event or theme in mind, Grucci said, and he workshops ideas on a sketch on paper, storyboards, or even just a whiteboard.

“At that stage, we’re just trying to get within the overarching theme and concept of what we’re going to create,” Grucci said. “We talk about what we could deliver, what we could do with them.”

There’s occasionally a bit of location scouting. For the 2014 New Year’s Eve Show in Dubai, Grucci originally planned to mount most of the show’s fireworks at the tip of the Burj Khalifa, the world’s tallest freestanding structure (it’s 2,716.5 feet top to bottom). But reaching the pinnacle required climbing a vertical ladder, which would have left a crew with the undesirable job of hoisting mortars into place by hand.

“You need to come down to reality sometimes [and] look at it from a technical perspective,” Grucci said, “and push to uncover any opportunities to deliver the vision.”

To that end, a show design might incorporate any one of the more than 3,600 different varieties of fireworks in Fireworks by Grucci’s pyrotechnic portfolio. Or it might call for a completely custom design, which is where the company’s Virginia factory steps in. Grucci can send a design off to the manufacturing line for assembly, test it, and refine it until it meets his exact specifications.

“We’re the only firework company in the States with a … facility [like this],” Grucci said.

A custom firework might consist of an individual shell, multiple fireworks strung together in a sequence, or a shape made from Fireworks by Grucci’s in-house “pixel-bursting” tech. If you’ve ever seen the American flag recreated in spectacular, explosive form and wondered how it’s done, here’s the secret: microchips embedded in synchronized projectiles. They adjust the individual mortars’ muzzle velocity (and subsequently their trajectories) on the fly.

“We take a bunch of 10-foot round bursts, each emulating a pixel, to create an image in the sky,” Grucci explained. “It’s not so refined that you could spell out someone’s name, but it’s perfect for [something like] a flag.”

Once Grucci and team finalize the whiteboard sketch of a display, it’s onto the next step: digitalization. The painstaking process involves translating the design to a schematic in AutoCAD; creating a master spreadsheet containing the list of firework products in the show, their locations, and the pan and tilt angles at which they’re to be fired; and producing a visualization. It can take months to design a single show, Grucci said.

With the finalized diagrams in hand, the team begins logistics planning. Transporting explosives across the country (or world) is no easy feat, and larger productions require as many as 60 to 70 pyrotechnicians to set up and tear down the thousands of mortars, fireworks, and cabling of each program.

The prep work begins before the first truck’s loaded — each state has ordinances governing noise and the handling of explosives, Grucci said. At the federal level, the Bureau of Alcohol, Tobacco, Firearms, and Explosives regulates professional fireworks licenses, and obtaining one requires meeting certain criteria, filling out an application, and undergoing a background check. Some states require a state license in addition to a federal license, and qualification tests run the gamut from written exams to demonstrating previous experience at professional fireworks shows. Other localities mandate that a police escort drive the fireworks into town.

Above: Fireworks by Grucci at the Bellagio Hotel and Casino in Las Vegas, Nevada.

Assuming the paperwork’s in order, preliminary staging takes days or even weeks depending on the job’s scale. Crews get busy installing mortars and getting cabling, racks, nails, wires, and electronics into position; the fireworks arrive a day or two after the equipment. Once the shells are on site, they’re loaded into mortars and wired to control modules, which feed into a firing control board in a protected bunker.

Water-based programs add another wrinkle: barges. They have to be moved into a position or held by a tugboat.

The minimum distance from the nearest mortar audiences can stand is determined by the size of the shell, Grucci said. The rule of thumb is 100 feet for every inch of shell diameter — for a show with a ten-inch shell, which creates an explosion the size of three football fields, onlookers stand 1,000 feet back.

The control board is automated for the most part — Grucci compares it to the DMX controllers used in lighting displays. But it also allows a show operator to switch off zones of fireworks and, in the event something goes wrong, prevent them from firing.

Fireworks shows are a lot of work, Grucci admits. But they aren’t without their rewards.

“While the showing is happening, you come to that indescribable moment after you hear the audience roar and see what you’ve been working on for months and sometimes years,” Grucci said. “It makes it all worth it.”