Google promised the publishers and bloggers up to “2x faster” websites and “35 percent more revenue” if they used Publish, suggesting it had magically solved two of the web’s biggest problems and packaged the remedy into some kind of WordPress killer. 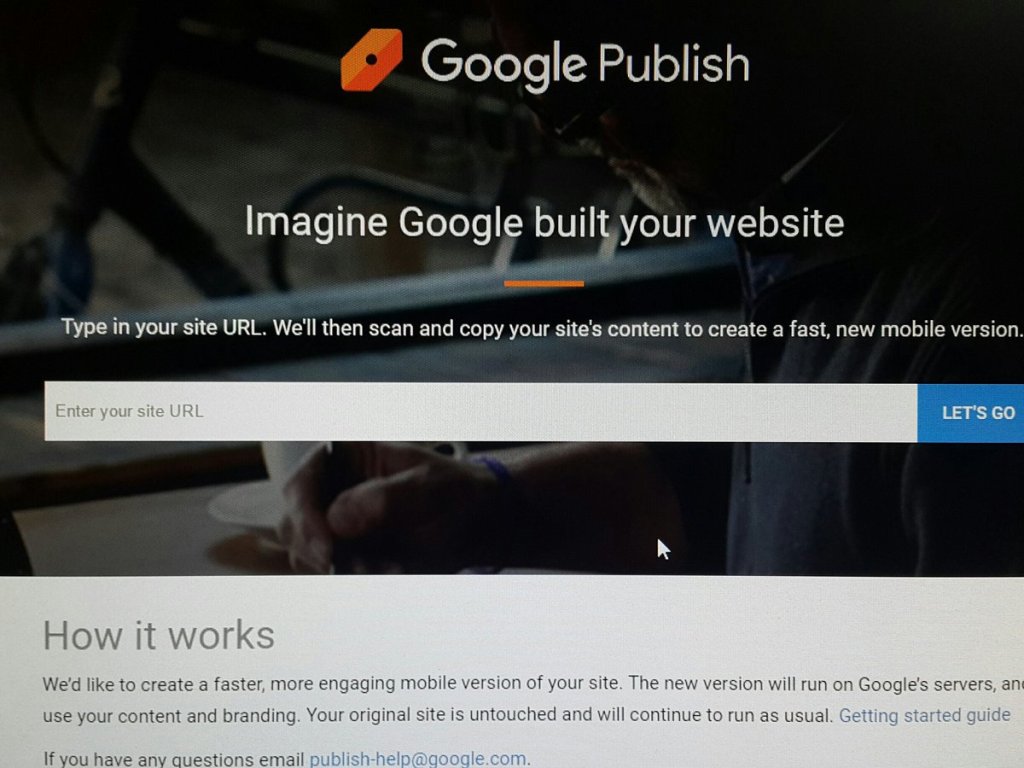 Above: The Google Publish site generator, posted and then deleted from Twitter.

As a first step, Google asked Publish testers to divert some of their blog’s mobile traffic to their new Google site. If testers liked the results, they could switch all of their mobile traffic over to the service. With a one-two punch, Google could replace a crappy mobile site and lock users deeper into its own advertising product, Adsense. This goal overlapped heavily with AMP, Google’s open source project to replace clunky mobile sites with slimmed-down layouts and reduced ads.

But then Google Publish (inevitably) evolved: It started looking like a full content management system (CMS) — a real publishing tool. Google added features for posting stories directly inside the Publish service and suggested that bloggers switch entirely to Publish, abandoning their original CMS and web host.

And then months later Google quietly killed the service, as has happened with many other behind-the-scenes experiments inside the world’s most successful advertising machine.

Google diminished the significance of Publish in an email to VentureBeat earlier this spring: “We regularly make decisions to test new solutions and products, taking into account feedback from our clients and partners along the way,” a spokesperson for Google wrote. “We decided to suspend a product we’ve been testing with publishers to help them improve the web experience.” No big deal, they might as well have said. This happens all the time.

In an on-background discussion with VentureBeat, an ad executive at Google told us this was just one of many similar, secret experiments going on inside Google. But Google Publish sticks out because, like many other services the company has released lately, Google created it to solve a very real problem: A lot of the web is slow and, well, shitty, dependent on displaying an increasing number of bloated and intrusive ads even as the amount of money they generate for publishers plummets. And Google, an ad business, is increasingly invested in solving this problem. Quite publicly, Google is going to great lengths to prop up the best of the web and fix the worst of it.

Since February 2016, Google has promoted AMP-powered stories at the top of Search results. And over time the company has lowered the mobile search ranking of sites that aren’t mobile friendly, including sites with “intrusive” popups and interstitial ads. Even Google’s Chrome browser will soon block ads that the company deems “annoying” or “intrusive.” And Google has launched and relaunched Contributor, a service that lets you pay to remove ads from a handful of sites.

Of course, these projects aren’t philanthropic. Although Google today is wealthier than ever, most of its revenue — about 87 percent — comes from ads. And internet users are increasingly blocking ads. Google knows that the worse the web gets, the harder it will be to grow its ad business, and the worse the company will look to internet users who curse every time they click on some godforsaken ad-supported blog.

Even if financially motivated, Google’s intentions may well be benign on some level, and its many projects could even improve the web on some level. Better mobile experiences, for one, make services inside browsers competitive with walled-off app stores like Apple’s and Google Play.

“People tend to think that Google’s playing an evil angle on everything we do — that it’s all some giant company ploy … but we actually sit around and talk about how do we help build a better experience,” said the Google ad executive. “If there’s no publishers, then we don’t have a network business. If the advertisers can’t get any business, then they’re not going to spend money with us. There are a lot of things that could make a lot of money in the short run, but it’s like a sugar high and then you crash. Those are the things we don’t do, because we’re trying to make it work for the long run.”

But the more Google wills the web into developing in any specific direction, the more the web plays into Google’s oversized hands. When Google’s Chrome browser starts blocking misbehaving ads next year, will that include the worst of Adsense? Google says Chrome will “stop showing ads (including those owned or served by Google) on websites that are not compliant with the Better Ads Standards starting in early 2018,” but are Google’s ads individually more likely to pass the smell test as independent ad blockers grow redundant?

Google — like Microsoft in the ’90s, and Apple and Facebook today — believes the solution to every problem is more Google. That may be the secret to a prettier, speedier, more user-friendly web, but it won’t make the web any more open, democratic, or diverse. Instead of actually solving the problem, Google may wind up creating a new one. A perfect, controlled web. No sugar highs. No crashes. Just lots and lots of Google, your devoted gatekeeper. It may be better, but it still sounds shitty.