The two groups allege that “Google is deceiving parents by marketing YouTube Kids as a safe place for children under five to explore when, in reality, the app is rife with videos that would not meet anyone’s definition of ‘family friendly.'”

They’re not kidding. The groups — the Center for Digital Democracy and the Campaign for a Commercial-Free Childhood — assembled a two-minute video of clips they’d found through the YouTube Kids app on a single day.

Google describes its Android app, which debuted February 23, as being “kid-friendly” and “for curious little minds,” but doesn’t say exactly what age it’s aiming for. It’s safe to say the designers probably had children under 5 in mind: The app’s home screen includes such kid favorites as Peppa Pig, Wallace and Gromit, Sesame Street, Caillou, and Teletubbies. There’s a “music” tab with kid-appropriate music, and a “learning” tab where kids can watch videos that teach them about science, how to make things, and more. 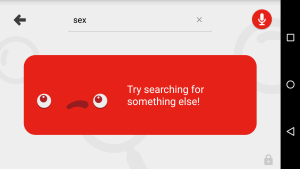 But there’s a Search button, and that is how kids can find their way to non-sanctioned content from YouTube. I was able to find the red wine and match videos in just a few minutes. A few search terms are blocked: You can’t search for “sex,” for instance.

Note: Parents can turn off the search capability in the app’s password-protected settings screen, but it is turned on by default.

Also, you can report videos as inappropriate: Just tap on the video to remove it from full-screen mode, tap on the three vertical dots in the upper right of the screen, and then press the “report” button. The videos remain accessible within the app after being reported, however.

A YouTube spokesperson provided this statement to VentureBeat, which essentially reiterates the app’s basic features:

We work to make the videos in YouTube Kids as family-friendly as possible and take feedback very seriously. Anyone can flag a video and these videos are manually reviewed 24/7 and any videos that don’t belong in the app are removed. For parents who want a more restricted experience, we recommend that they turn off search.

Other unsavory stuff the consumer groups found, according to their press release:

The groups announced their findings today, and are updating a complaint they made to the Federal Trade Commission on April 7. That complaint (.pdf) alleged that YouTube Kids included advertising and marketing material that was inappropriate for young children, who cannot distinguish between educational content and advertising. For instance, they allege, many videos intermix commercials with other content in confusing ways, or endorse toys, candy, or other products in violation of the FTC’s policies around paid endorsements.