Updated at 8:21am Pacific with the nominations for best visual effects.

No one yet knows who will win best picture, best actress, or best director when the Academy of Motion Picture Arts and Sciences hosts the 87th Academy Awards on February 22. But one thing is a lock: No matter who takes home the Oscar for best visual effects, they’ll have used Maya, Autodesk’s animation software, to bring their robots, hobbits, astronauts, monsters, and other on-screen creations to life.

Indeed, the visual effects and animation teams on all 10 films considered for this year’s Oscar nomination, and all five that received nominations this morning, used Maya, a powerful, customizable tool that enables deeply complex processes like character animation to look seamless and realistic on the silver screen.

And it’s not just this year. Maya’s been used on every winning film since 1997, an uninterrupted run that has meant big business for Autodesk as the tool — which costs $185 a month, or $3,675 up front, per license — has been adopted by everyone from the most accomplished professional levels of the visual effects and animation industries to individual amateurs and students just getting started in their careers.

Which begs the question: Could Hollywood even make visual effects-heavy films these days without Maya?

“You can’t do it,” Scott Farrar, the visual effects supervisor at Industrial Light & Magic who oversaw Transformers: Age of Extinction, told VentureBeat. “At this point, everybody’s so comfortable with the tool, it would be impossible.”

The latest iteration of the Transformers franchise was one of 10 films that competed in the Academy’s annual visual effects “bake-off” in Beverly Hills earlier this month, five of which earned nominations today. The others were Captain America: The Winter Soldier, Dawn of the Planet of the Apes, Godzilla, Guardians of the Galaxy, The Hobbit: The Battle of Five Armies, Interstellar, Maleficent, Night at the Museum: Secret of the Tomb, and X-Men: Days of Future Past.

In the end, the Academy nominated Captain America, Interstellar, X-Men, Dawn of the Planet of the Apes, and Guardians of the Galaxy.

Those films represented work by many of the industry’s leading VFX houses, with ILM, Weta Digital, Atomic Fiction, Moving Picture Company, Method Studios, Digital Domain, and others vying to win the Oscar next month, and many of those houses contributing on multiple films.

Through it all, Maya is the common thread.

“I’m not really sure I remember a time when we weren’t using it,” Farrar said. “It’s a fundamental building block to the process.”

Used by the best and available to the rest

It’s hard to pin down exactly what Maya can do. Perhaps the list of things it can’t do is shorter. As Blake Sweeney, head of software at Method Studios, which had its hand in five of the ten films in the 2015 bake-off, put it, “Maya covers you from modeling through rigging to animation, and even to lighting, and everything in between. It allows you to do all that in a single package.”

“In between” also includes rendering, compositing, texturing, and much more. Visual effects studios use a high-end version of the software and frequently customize it using a set of APIs — often creating new proprietary tools that are then sometimes folded into the standard Maya feature set — while individuals use a more scaled-down version.

For Autodesk, a $12 billion public company that’s one of the world’s largest creators of design software, Maya’s longtime success in Hollywood is both prestigious — and big for the bottom line thanks to a “halo effect” that comes with people wanting to mimic the top professionals in the field.

“From a business standpoint, of course, it’s tremendous for us,” said Chris Bradshaw, a senior vice president at Autodesk who heads the company’s media and entertainment division. “There’s lots and lots of people producing independent films, commercials, 3D game experiences, and virtual reality, and all of these people want to use the same tool as the people at the top of the pyramid…. It’s used by the best, and also available to the rest.”

But Maya’s ubiquity is also one of its biggest selling points at those top levels. Multiple animation supervisors who worked on films included in this year’s bake-off told VentureBeat that the fact Maya is so universally adopted makes it easy for VFX houses to staff up quickly when work on a film gets intense.

“It’s wonderful that a single piece of software has become the industry standard,” said ILM’s Scott Benza, the animation supervisor on Transformers: Age of Extinction, “in that we often have to crew up with a large number of artists, bringing in talent from outside the company. And to not have to train them, and to have them hit the ground running, is a huge benefit for us.”

Maya has countless uses, but on a film like Transformers, one of the most important features is enabling animators to build giant robot characters that move just how viewers’ brains think they should. The robots in Transformers were made up of tens of thousands of individual digital parts, Benza explained, and Maya allowed the film’s rigging team — the people who are tasked with figuring out how those pieces move — to make it all look how it should.

“We have a set of [Maya] tools that allow us to select a specific part, or set of parts, and … animate just those specific pieces,” Benza said. “We can dynamically add pieces in or take them out over the course of [a] shot. That just puts a lot of functionality into the hands of the artist at the shot level.”

Those tools were created by ILM, which took advantage of what Bradshaw called Maya’s “extensibility.” And many VFX houses do the same thing, often creating features that meet their precise needs, and sometimes eventually selling those tools back to Autodesk.

For example, Walt Disney Pictures used Maya to build a tool called XGen that, among other things, helped its animators craft Rapunzel’s long hair in the 2010 film Tangled. After using it exclusively for a few years, Disney licensed XGen to Autodesk, which then incorporated it into the standard Maya feature set available to everybody.

This means everyone wins, Bradshaw explained. On the one hand, the larger Maya community gets to use tools like XGen, and on the other, studios like Disney can keep doing so but no longer have to invest the resources to support the tools.

“These guys like to innovate, but [those innovations don’t] last a super long time in this industry,” Bradshaw said. “There’s a certain pride of primary authorship, but then there’s also a willingness, almost a desire, to share, and to move the industry forward.” 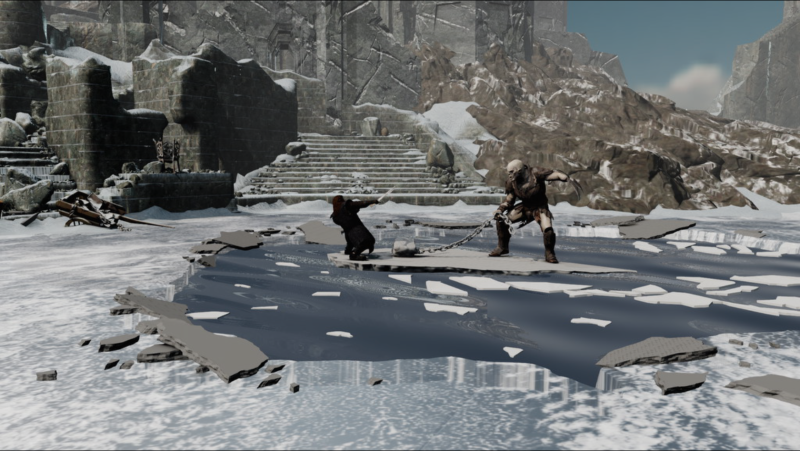 Bradshaw won’t get much argument on that.

To Dave Clayton, an animation supervisor at Peter Jackson’s Weta Digital who worked on all three Hobbit films, Maya is key to the workflow pipeline at one of the best-known VFX houses in the world. “Everyone at Weta Digital uses Maya,” Clayton said.

At Weta Digital, Clayton added, Maya’s the perfect tool for handling the “dense” key-frame or motion-capture data that comes from working on animated characters like Smaug or Gollum in The Hobbit, or the apes in Planet of the Apes.

In the end, Maya’s dominant place in the visual effects industry comes down to its ubiquity — and vice versa. It’s not that other tools couldn’t replace it, but to get everyone in the industry up to speed on something new would take years. And that’s pretty much unimaginable to someone like Clayton, who’s used Maya since 1999.

“I don’t think a month has gone by when I haven’t used it,” he said. “It really is a big feature of my working career. I love it.”