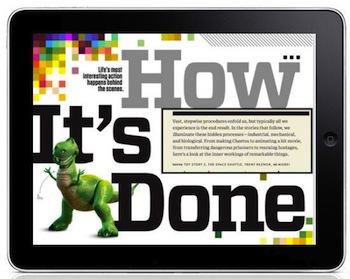 It looks like iPad magazines have a long way to go before they live up to their potential, according to some numbers pulled from Audit Bureau of Circulations.

The Women’s Wear Daily website pulled the circulation numbers for a number of iPad magazines, and the common thread between of all them is a decline in sales for November. One of the most high-profile iPad magazine applications came from Wired, which averaged 31,000 magazine sales between July and September, then saw the number fall to 22,000 in October and 23,000 in November (compared to 130,000 combined print sales for the same two months). GQ sold 11,000 iPad copies of its November issue, compared to an average of 13,000 between May and October. Vanity Fair had 8,700 November sales, down from an average of 10,500 between August and October.

It’s risky to draw any big conclusions from these numbers, since it’s so early in the iPad’s life, plus many of the month-to-month patterns are obscured behind averages. Still, the generally low numbers (compared to print circulation) and particularly the declines suggest that none of the magazines have really figured out what to do on the iPad yet. It’s another reason to be skeptical about iPad-only publications, especially ones that are expensive to produce — like, say, News Corp’s upcoming iPad newspaper The Daily.

Over at The Next Web, Alex Wilhelm argues that the numbers are “actually meaningless in the long haul.” I don’t quite agree with that, but I think the numbers say less about the iPad’s long-term future and more about the magazines’ current models. Wilhelm makes two good suggestions — prices need to be cut and distribution needs to be improved.