LinkedIn, the business-focused social network, has redesigned and relaunched its Pulse news app for iOS and Android — and the focus is very much on personalization.

Prior to its $90 million acquisition by LinkedIn back in 2013, Pulse was a Flipboard-esque news-aggregator app, collating your favorite publications and news sources and presenting them in a pretty, interactive mosaic. Following a rebrand to “LinkedIn Pulse,” the app has become a core facet of LinkedIn’s publishing ecosystem — the app analyzes what’s being written and splits the content into “channels,” which users are asked to “follow.” And you have probably used Pulse without knowing it — it powers much of the content you see on LinkedIn’s homepage.

With the redesigned Pulse for iOS and Android, the company is essentially treating it like a brand new app — the existing incarnations have been pulled completely from the App Store and Google Play. For those who already have it installed, however, it will continue to work until “the end of the year.”

“Instead of slapping features on to the old reader app, we decided to completely redesign the new Pulse experience from the ground up,” explained Pulse founder Akshay Kothari in a blog post. “The new Pulse app focuses on delivering you personalized news — news that is powered by your professional world.” 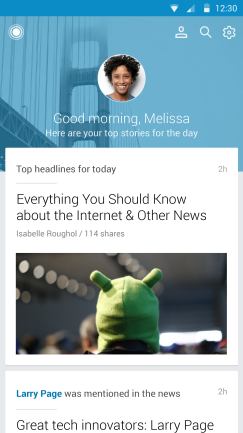 LinkedIn is basically making it easier to on-board users — they will no longer be asked to follow specific topics or publishers to get the ball rolling. You can log in with your LinkedIn credentials, after which the app serves up news based on your industry, your connections, and any other signals, such as what you choose to follow on the social network. But you can also explore without signing in.

The most immediately obvious design change is a new cards-based interface that lets users remove a story they don’t like, save it for later, or follow an author. And it’s all designed with speed in mind.

In effect, LinkedIn is looking to automate the process more than ever, making it stickier for users and easier to get what it’s all about. It flags stories that are popular within a user’s industry, or even among a person’s direct colleagues. 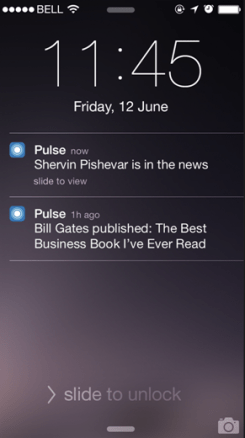 Interestingly, Pulse will also tell a user that a LinkedIn connection has been mentioned within an article anywhere on the Web — and they can set up alerts to be notified when this happens.

If this sounds familiar, think back to last July when LinkedIn revealed it had aquired Newsle, a platform that notifies you when your friends make the headlines — this is what’s helping to power this new feature within Pulse.

Pulse started life as a Stanford University project back in 2010, with the app hitting iPhones within six weeks. Three years later, it had 30 million users.

“In 2013, as we started thinking about the future of Pulse, we realized that to truly become the authoritative source of daily news, we’d have to get significantly better with our content recommendations,” said Kothari. “We had done an amazing job giving our users the ability to visually see news from hundreds of sources in one place. But users were increasingly getting lost in this stream of information. Pulse needed to sift through the millions of articles published every day and pick the ones that are essential for each user.”

With Apple launching its own News app shortly, and Flipboard continuing to pad out its consumer-focused service with new features, LinkedIn is striving to differentiate with Pulse. With so much news and information to parse online, companies are increasingly looking for ways to surface the most interesting, the most relevant, and — in LinkedIn’s case for professionals — the most useful.

LinkedIn has been making big moves in the publishing realm, and you may have missed its evolution from a simple social network. LinkedIn Groups has enabled social user-generated content for years. And, back in 2011, LinkedIn Today launched as a news aggregator for users to search out topic-specific articles. A year later, the LinkedIn Influencer program launched, letting users subscribe to “thought leaders” such as Richard Branson. Six months ago, LinkedIn finally opened its publishing platform to everyone around the world.

And this is key to Pulse. Not only does it tap content from a myriad of news sources across the Web, but it also has its own organic content — 130,000 original articles are now published every week through LinkedIn’s platform.

The fact that LinkedIn has pulled the original Pulse app from the app stores altogether, rather than simply introducing an update, is indicative of how the people behind Pulse view this relaunch — it wants it to be seen as a brand new service.

“In the past two years, we’ve been hard at work to marry the best content that Pulse has with the deep identity and network data that LinkedIn has, to create the world’s first personalized business news digest,” said Kothari.