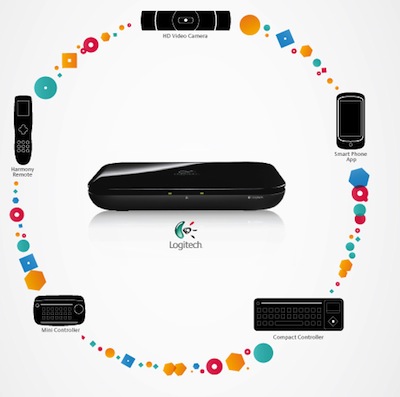 Kevin Simon, a product management director at Logitech, gave me more details this afternoon about what the company is building around Google TV, the just-announced system for accessing the Web on your television. Logitech’s “companion box” (the company isn’t sharing its official name yet) will be much more than an Internet connection for your TV, he said. And Logitech isn’t stopping with a single device.

The box basically uses Google TV as its operating system, but it will include lots of extra features. Logitech’s Harmony technology for managing multiple devices (such as your stereo or video game console) from a single remote will be built in. And by “remote”, I actually mean “smartphone” — if users own the box and install an application on their iPhone or Android device, they’ll be able to use that device as the controller.

The experience, he said, will be “television the way it should be.” When you sit down to watch a TV, you probably don’t care whether it comes from a network TV channel, cable, YouTube, or many of the other streaming video sources on the Web. Conversely, the main reason people watch television on their computers is because they can’t get the content on their television — it’s not like the laptop viewing experience is anything to get excited about. With Google TV, you can see all that content on the biggest, highest-quality screen in your house.

And instead of crowding your family around a laptop for a Skype phone call, you can all sit in front of the TV. The box will also integrate Logitech’s Vid cameras for video phone calls — I haven’t tried the service, but Simon described it as Skype but focused entirely on video calling.

The other device that Logitech is working on, which I didn’t get to see in action, is a specially-designed controller that combines keyboard, mouse, and remote capabilities. Neither a regular remote nor a keyboard/mouse setup are really built for the hybrid Web/TV experience that Google is building, Simon said, but this new controller will be.

The company isn’t announcing pricing or exact timing, except to say the devices should be ready this fall. As announced on-stage, they will be sold at Best Buy, and Simon said they’ll be available on Amazon, too. I’m guessing there will be other retailer announcements as we get closer to the launch date.