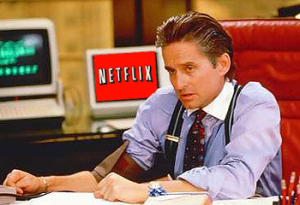 Media Predict is a marketplace where people get paid to place bets on which media will fly and which will flop.

As we publish this story, Media Predict is launching a real-money Netflix futures market (image below). It lets people with a Media Predict account put down real money and bet if Netflix will have more or fewer than 20 million users in the fourth quarter of 2011.

After recent pricing changes and last night’s announcement that it will shift its DVD rental business into a new company named Qwikster, Netflix customers have been posting thousands of negative comments on CEO Reed Hastings’ blog and other social forums. VentureBeat has a summary post of the Netflix drama. Perhaps it will help you place your bet.

Media Predict also lets members bet on the success and failure of each week’s television premiers and movie releases.

The Media Predict business formula is based on the concept that an individual in a hot seat is worse at predicting the success of books, movies or TV shows than a group of people free from the crushing risk of a solo failure. Based on cumulative decision, the cream of the media crop should, theoretically, rise to the surface.

“People bet on sports and politics and whether your friend can get a date,” says founder and CEO of Market Predict Brent Stinski, in an interview with VentureBeat. “You prove your smarts and it makes things interesting. But the bigger reason here, why I created Market Predict, is to be heard. If you’re good [at betting] and make it into the real-money site, not only can you make some cash but some very big companies will be paying attention to what you say. Also, the other qualifiers will be people who have proven their smarts too. It should be a competitive, intense little community.”

When you first start on Media Predict, you can’t use real money. You can place bets with a fake bank account, but you need to work your way to an invite into Media Predict Real Money. You do this by being an active user who makes good predictions. Some categories weigh more on invitation decisions. For example, Stinski says if you bet well in television and film topics, you are much more likely to be invited than those who participate in reality show eliminations. You can also be invited into Real Money based on demographics like gender and location.

The competition and real money-aspect of Media Predict will encourage people to make smart bets that media executives can use. This is what market research is supposed to do, according to Stinsky, but test audiences and focus groups haven’t really been dependable enough to earn executives’ trust. Media Predict provides markets which, according to Stinski, have a remarkable track record of success. He points out The Iowa Electronic Markets have outperformed the AP and the Gallup polls in forecasting election outcomes. Stinski says markets have consistently predicted television cancellations and box office flops.

For example, a handful of movie executives may have thought “Green Lantern” would be a hit. The super hero action flick cost at least $200 million to produce yet it brought in less than $220 million worldwide. Perhaps a dozens of executives, or hundreds of critics, present at early screenings would have predicted the flop and maybe even prevented it.

“It’s not a crystal ball. They’re not perfect,” he says. “They’re just better than everything else.”

One risk Media Predict faces in predicting media outcome is groupthink, a social psychology theory where a group of people makes a bad judgment because group pressure blocks out reality and moral judgment. Basically, groups of people affected by groupthink ignore logical alternatives. According to the theory, a group of people with similar a background — be it ethnic, economic, religious, etc. — are insulated from outside opinions. This could certainly happen in regards to media judgement. Consider the difference between a group that raves about “Dolphin Tale” and a group that thinks “Machine Gun Preacher” is the best film of 2011.

Media Predict hopes to overcome the risk of groupthink by introducing the financial factor.

“All markets work the same — people make money if they make correct predictions,” explains Stinski “They lose money if they don’t. So profit motive makes everyone tell the truth. With surveys and focus groups, people have no incentive whatsoever to give good information. We’re the first method ever to get away from that.”

Stinski believes media companies will release anything to see if it works, as long as these are commercially viable. It’s like testing spaghetti noodles against a wall to see if they’re done.

“Good media is a good thing,” says Stinski. “That’s what the research showed — if more people have media they love, they’re more psychologically sound and more aware of the world around them. I mean — Media Predict is a business that makes money and serves clients. But if we can help make media content a little better, we’ve done a good thing.”

Media Predict has offices in New York and Los Angeles. Oh, and Stinski is hiring. 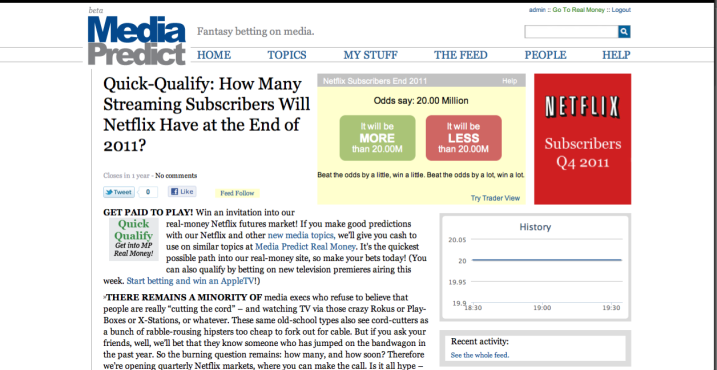 Brent Stinski has written for VentureBeat in the past. Our coverage of his new company remains unbiased. He has no relation to post author Regina Sinsky, other than the fact that their names are painfully similar.