Each day in India’s capital, New Delhi, hundreds of thousands of people take a quiet subway across the crowded suburbs to reach their work. The relative calm is interrupted every few minutes as the train reaches a station and an ever-growing population jostles to find a seat. Seconds later, everyone returns their attention to their smartphone screen, resuming the comedy sketch they were watching on YouTube.

More than 7,500 miles away, executives at Netflix are scrambling for new strategies to court this audience. Earlier this year, CEO Reed Hastings, who has identified sleep as the biggest competition to his service on multiple occasions, wondered out loud if the next 100 million Netflix subscribers are in India.

They probably are, but YouTube, not sleep, has already claimed them.

Despite Netflix and Amazon investing billions of dollars in producing original content, they are struggling to make inroads in emerging markets. YouTube, on the other hand, is growing rapidly, becoming a daily habit for even new internet users.

In India, for instance, YouTube reaches 245 million unique users each month, or 85 percent of all internet users in the country, the company told VentureBeat. About 60 percent of all YouTube traffic in India comes from outside the country’s six major cities.

“I think one of the main reasons YouTube is so successful in emerging markets is that it is more mobile-centric. Short-form video lends itself to mobile viewing versus long form. It is not particularly comfortable watching a two-hour movie on your phone,” explains Michael Goodman, director of Television & Media Strategies at research firm Strategy Analytics.

.@google just said that India is the only country in the world where Youtube has more unique visitors per month than google search. #thinkplatforms

To fast-track its global growth and reach, Google maintains deals to ensure an unspecified number of internet service providers treat YouTube’s traffic differently. As part of one such deal, several telecom operators and broadband providers do not count a user’s YouTube consumption against their monthly data plan. To an extent, YouTube also benefits from the pallet of apps that ship pre-installed on the vast majority of Android handsets.

Of course, YouTube, which is used by 1.9 billion logged-in users each month, is not limited to developing markets. Of all the users who watch any streaming service in the U.S., 96.1 percent consume YouTube and 73.8 percent consume Netflix, according to eMarketer’s 2018 estimates: 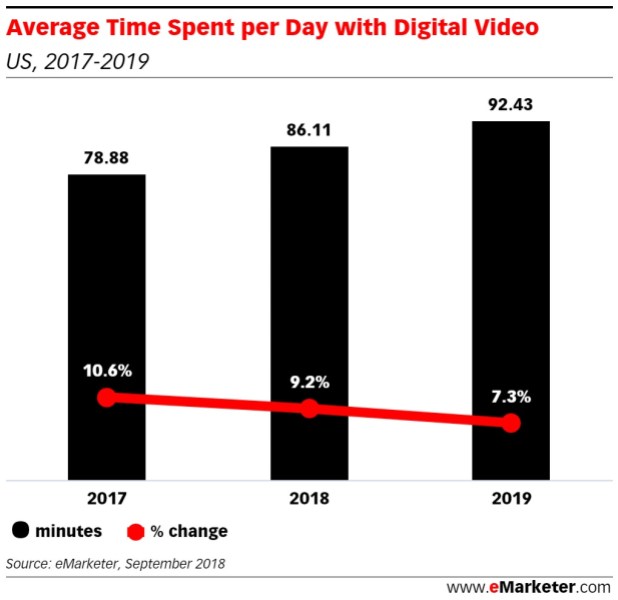 Globally, YouTube told VentureBeat that 75 percent of the platform’s watch time occurs on a mobile device. The average watch time for a mobile user is 60 minutes per day. In other words, this is the time a user could have spent watching Netflix. According to eMarketer’s estimates, an average user would spend about 86 minutes per day watching digital videos on streaming services this year. (Netflix does not reveal individual viewing time.)

Analysts VentureBeat spoke to said that some of YouTube‘s recent moves could further boost its user base and consumption. Last month, YouTube began adding full feature-length Hollywood movies to the website. And a few days later, the company announced that it would be making original content available to non-paying users. (eMarketer analyst Paul Verna noted that the move also underscores the difficulty in monetizing content through payments.)

But perhaps the biggest advantage YouTube has over Netflix is the breadth of its catalog and how much of it is available to users at no cost. Whether it is speeches made at Oxford Union, government press conferences made available by C-Span, or daily U.S. talk shows, the platform serves a variety of needs.

Strategy Analytics’ Goodman added that despite all the investment YouTube makes to produce original programming and license movies, this only amounts to a tiny percentage of its total content library. “In the grand scheme of things, the amount of viewing of original content and movies is just a drop in the bucket compared to the rest of what is consumed on YouTube,” he said. In other words, Netflix and Amazon and 100 other OTT services are not fighting one entity in YouTube, they are competing with millions of content creators.

Even if Netflix does not point to YouTube as a threat, it is apparent that the company acknowledges its reach. If you frequent YouTube, odds are you have already encountered Netflix ads there. Netflix also counts on YouTube to help it find a larger audience. Take for example the new weekly Netflix show “Patriot Act with Hasan Minhaj” — the show’s YouTube channel offers all its episodes for free.