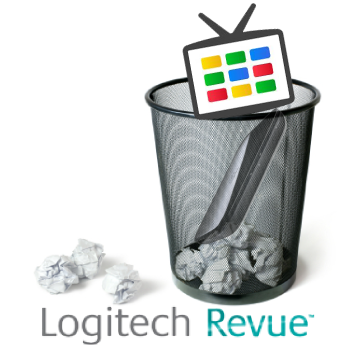 In December 2010, Logitech debuted the Logitech Revue, a streaming set-top box with Google’s made-for-television Google TV operating system. The device was intended to make the massive amount of video content  on the internet available (and optimized) for television screens. However, lack of support for Google’s software (along with major TV networks blocking access to their content) caused the Revue to perform poorly in the market.

At a Logitech-hosted Investors Day event Wednesday, CEO Guerrino De Luca called the Revue a mistake that — along with miscues in EMEA region — cost the company well over $100 million in operating profit. The company, he said, intends to allow the device’s current inventory levels to run out this quarter. It also has no plans to introduce another box to replace the Revue.

As for why the Revue was a mistake, De Luca blames the Google TV software for not being ready at launch. Google recently released an update to its Google TV software that gives it the ability to run web apps and view new content channels, which some critics say is long overdue for a platform that’s been available for almost a year.

“To make the long story short, we thought we had invented (sliced) bread and we just made them. [We made a commitment to] just build a lot because we expected everybody to line up for Christmas and buy these boxes at $300 … that was a big mistake,” De Luca said.

Arguably, the most successful set-top boxes on the market have been less powerful, low-priced devices like the Roku box ($59-$99). Apple also learned this difficult lesson with its first generation Apple TV set-top boxes, which were later replaced with a cheaper $99 version with no storage capacity.

The success of Google TV likely won’t come through a set-top box from a large, well-known manufacturer like Logitech, which is something De Luca noted during the event. Instead, it’ll likely be through smaller, relatively unknown companies entirely focused on producing Google TV-enabled set-top boxes.