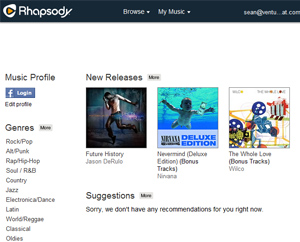 The move will give Rhapsody, one of the oldest streaming music services, more subscribers and help it contend with new aggressive players in the same space such as Spotify, MOG and Rdio. Napster subscribers and other assets will be transferred over to Rhapsody later this year after the deal closes.

Napster is best known as the peer-to-peer program that started the rise of digital music piracy, but it has been a paid music service in some form since 2003. Best Buy bought Napster for $121 million in September 2008 and turned it into a surprisingly decent on-demand service with a catalog of more than 14 million songs. Best Buy will receive a minority stake in Rhapsody.

Rhapsody currently has more than 800,000 subscribers paying at least $10 per month for access to a catalog of over 12 million songs. We don’t know how many subscribers Napster has, but this it will give Rhapsody more heft and better negotiating power when it talks with music labels.

In the face of challengers like Spotify, MOG and Rdio, Rhapsody has evolved by adding better social media integration and strong mobile applications for iOS, Android, BlackBerry and Windows Phone 7. The biggest area where Rhapsody loses points compared to its peers is sound quality by only offering 128 kbps streams.

Are you a fan of Rhapsody or Napster? What do you think about this move?