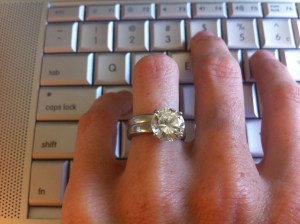 Digital media and online advertisements are the best way to reach the wealthiest Americans, according to a study released today by the Interactive Advertising Bureau (IAB).

“The traditional view of how the affluent use the Internet has been turned upside down,” says Sherrill Mane, senior vice president of industry services for IAB, in a phone interview with VentureBeat. “Until now we didn’t have data to show they were heavy users. Now we know the wealthiest Americans use digital media far more than their less affluent counterparts.”

The study defines “affluent Americans” as people with at least $100,000 annual incomes. They comprise 21 percent of U.S. households, have 70 percent of all consumer wealth, and spend 3.2 times more than other Americans on purchases.

“They’re now more important than ever,” says Mane. “The economy is bad, to say the least, and the spending that is coming out of this group is even more important. As the recovery comes along, it is this segment that will lead us out.”

IAB found that 98 percent of affluent consumers use the Internet, compared with 79 percent of the general population. Wealthy Americans spend around 26 hours online each week, 18 hours watching TV and about eight hours listening to the radio. The general population, on the other hand, spends about twice as much time weekly with TV and radio – 34 hours and 16 hours, respectively – and just about 22 hours on the Internet.

Other key data points show affluent users are just as capable of advertising recall. Eighty-eight percent of affluent consumers recalled being exposed to at least one digital ad during the previous week, compared with 84 percent of non-affluent Internet users. Within these groups, affluents recalled 21.1 ads on average, versus 20.2 for other groups.

“These recall numbers are substantial but, perhaps, understated too,” says Steve Kraus, Chief Research & Insights Officer at Mendelsohn, an independent research firm which partnered with IAB to conduct the study. “This finding speaks to the fact that while affluent user numbers are a little higher they aren’t statistically significant. What is significant is they were the ones that historically weren’t believed to be as receptive.”

“This study certainly reinforces an underlying trend in advertising and marketing,” says David Hallerman, principal analyst at eMarketer.com. “What’s happening overall, in terms of marketing and ad media, is it is turning into a duopoly with TV and the Internet. Print, from magazines and newspapers to the Yellow Pages, is the one losing ground with affluent users continually.”

Hallerman points out that it is still necessary for some of the largest marketers, including those for consumer packaged goods and car manufacturers, to blend their campaigns across TV and the Internet to target multiple demographics.

“It’s a hard thing to do and it’s the single biggest challenge for marketers now,” says Hallerman. “To cover all bases and reach an audience without too much duplication and be able to do better targeting online. Studies like this reinforce the need to accept that challenge and encourage their target audience to take action.”

The IAB study said 59 percent of affluent consumers reported taking action based on a digital ad during the preceding six months. It’s difficult to find these statistics for TV and radio, which have been notoriously hard to track.

“You can record the actions of online users,” explains Mane of IAB. “Clicking on links, liking, purchasing, sharing ads through email and social media. You can’t match that with TV and other media. That’s part of why we did this study. We didn’t know how this population engaged with the opportunity to interact. We found they did take action and that’s a very big deal.”

The receptivity of affluent Americans to digital advertising is underscored by their greater understanding of the ad-supported web model and the benefits of ad targeting, as compared with non-affluent consumers. According to IAB’s study:

Affluent Americans are twice as likely as the general population to own smartphones (33 percent vs. 17 percent), and 79 percent of the affluent say their lives have become “intertwined with technology” over the past decade.

Zach Coelius, cofounder and CEO of real time media buying platform Triggit.com, points out that online advertising shouldn’t just be used to target the wealthy. It can be used to target just about anyone. “The Internet makes it very easy to selectively target audiences,” says Coelius. “Wealthy people read and interact with offline sources at the same rate everyone else does but you can’t target specific individuals offline. Online media lets you cherry pick the audience you need.”

Some are questioning if demographics matter, as social targeting takes off.

“This is silly,” says George John, CEO and founder of Rocketfuel.com, a real-time ad targeting platform. “Of course income matters, but in an ideal world where scholarship in marketing had advanced to a level similar to other disciplines, making a big deal about it should seem as strange as a biologist getting excited about the importance of carbon.”

John points out that he’s connected to his VCs and nieces on social networks but those groups don’t share consumer behaviors. Thus, they shouldn’t receive similar marketing treatments.

“That’s crazy and the kind of thing you’d only say if your company only knew how to do social targeting,” John says.

“The truth is that everything matters,” John concludes. ” ‘Everything’ is not cool and hard to talk about without rattling off a lot of examples, but what is cool is building the machine to sift through everything and personalize the web.”