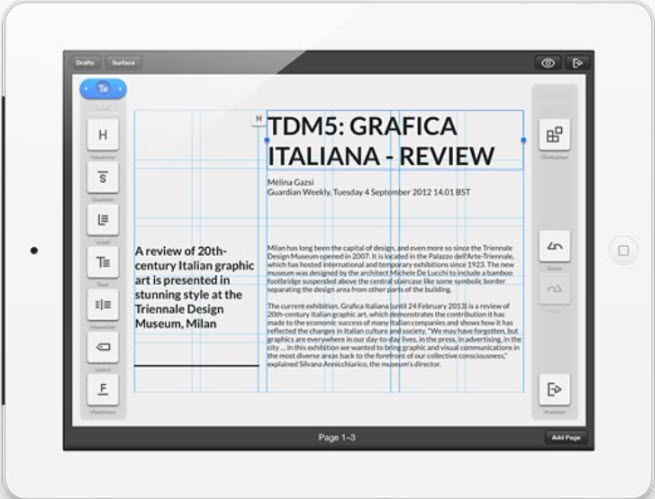 Stampsy has taken the blogging revolution to heart, but it doesn’t believe that tools for that revolution are adequate. The company wants to give would-be media people bigger visibility through tools that allow them to effortlessly create a professional-looking media product and publish it on a popular media channel.

For example, the team pointed out during its time on the DEMO stage, one of its users is a teenage girl working as a fashion magazine intern. She wants to quit her internship and use Stampsy to build out her own publishing empire, and they’re more than happy to help her do that. 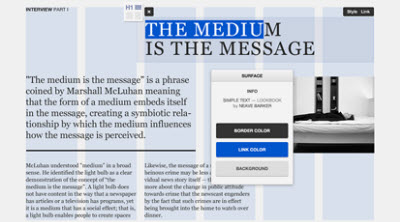 The company has come up with a different kind of interface for its media, dubbed a “stamp.” Viewing the content in the stamps is like browsing through a beautiful magazine you might have on a coffee table. To add content to the stamp, the author uses Stampsy’s tools, which can be touched, dragged and dropped on a mobile device. But you don’t have to know a programming language to craft and publish your content.

Stampsy, which is a presenter today at the DEMO conference, believes that form has followed function in the blogosphere for too long. It hopes, for instance, to contemporize the long-form narrative on the Internet, making reading an online story like reading a Sunday newspaper or magazine. 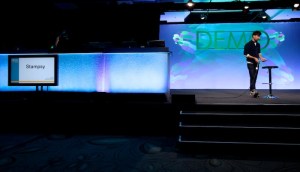 “We believe that today people are the media,” said Roman Mazurenko, the cofounder of Stampsy. “We all have gone from reacting to the news to creating the news. With that in mind, Stampsy gives people greater visibility because we give them the tools. The more tools we provide, the more expressive your content can get.”

“[Users] can transform images into a new form of communication,” Mazurenko told the audience at DEMO during the company’s launch. “We hope that at this early stage you see the promise of Stampsy.”

Stampsy says anyone can use its tools on an iPad to create professional-looking content that makes a strong visual impact. It takes just a few swipes. No design training is necessary. You literally mold your content in your hands. And if the right tool doesn’t exist, Stampsy’s applications programming interface lets third-party developers create new tools.

Mazurenko says Stampsy is a very personal project. In 2007, he was the editor-in-chief of a popular digital magazine, Lam Magazine. He saw how much work and time it took to publish a story online that had meaning, substance and authenticity. His cofounder, Sergey Gromov, came to the same conclusions while spending hours of work designing special projects and digital layouts for the web site Afisha. 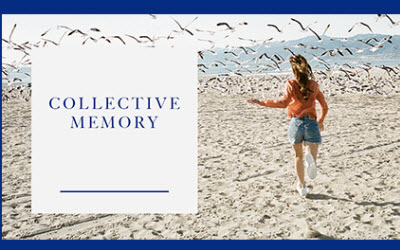 In 2008, Mazurenko came up with three ideas that became the fundamental principles for Stampsy. He felt that with today’s digital programming tools, one should not have to sacrifice quality in favor of cost efficiency. He felt online content has floating value and it needs to be handled properly and balanced correctly. And he decided a new form of communication was needed, with instruments that don’t require special skills.

“At Stampsy we gained a new understanding not only of bloggers but also of people who don’t blog, opening up a completely new market,” Mazurenko said. “This market is so huge, that we gained confidence that it will change the way people publish their content on the internet. We have a goal to provide a complete media venue for independent publishers, professional teams, brands, and everyone else.”

Stampsy is polishing its platform and plans to release it on iTunes in December. Next year, it will add new features and a marketplace for tools.

The company has eight employees and has raised a seed round of $800,000.

Stampsy is one of 75 companies and 6 student “alpha” startups chosen by VentureBeat to launch at the DEMO Fall 2012 event taking place this week in Silicon Valley. After we make our selections, the chosen companies pay a fee to present. Our coverage of them remains objective.