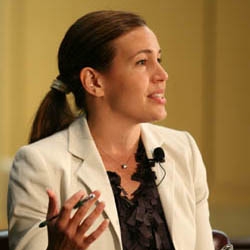 The departure was confirmed on Friday in a post by Erick Schonfeld, the company’s current EIC. News first broke when TechCrunch founder and former editor-in-chief Michael Arrington tweeted, “Heather Harde has resigned from TechCrunch. Sad day.”

Harde told VentureBeat in an email, “My last official day will be December 31, but I will continue to help support the Crunchies Awards and will attend the event. My immediate plans are to take a break,”

Harde joined TechCrunch as CEO in 2007 after leaving News Corporation, where she acted as the senior vice president of mergers and acquisitions for Fox Interactive Media. TechCrunch itself was founded in 2005 by Michael Arrington, who sold the company in 2010 to AOL. He left this past September to launch his own venture capital firm, CrunchFund. Since Arrington’s departure, both TechCrunch and AOL have experienced employee departures. This includes AOL president of applications and commerce group Brad Garlinghouse, who left in November, and TechCrunch senior editor Sarah Lacey, who is rumored to be starting a blog of her own.

TechCrunch writers MG Siegler and Paul Carr also recently resigned, with Siegler announcing his intent to join CrunchFund and continue at TechCrunch as an Apple columnist.

AOL made significant changes to its editorial vision after acquiring The Huffington Post and adding Arianna Huffington to its staff. In March, the company sloughed off around 400 to 500 writers, leading to even more editorial upheaval. In addition to the moves at TechCrunch, former Engadget employees also left and recently launched technology blog The Verge.

Harde has not yet disclosed what she will be doing next.