There’s no denying that there’s a glut of mobile messaging apps all vying for attention, even though the majority aren’t really that different from each other.

But ComiXchat, a mobile chat app launching today, has a unique spin: Instead of using those boring multi-colored chat bubbles, it displays conversations as sequential panels of artwork that tell a visual story. So you end up building a comic strip as you talk to friends, and it doesn’t require any more effort than a regular chat app.

With ComiXchat, you and the person (or people) you’re speaking to are represented as two different cartoon characters that you get to pick. Every message displayed between yourself and the other person in the conversation is displayed as a word balloon about or near that character, in the order in which you communicate. On top of that, those cartoon characters move into new panels with new background scenery as you continue to converse. You can even add narration boxes to panels via a text command, or have your characters hold rich media objects (photos or videos) displayed as physical objects.

For all intents and purposes, ComiXchat lets you communicate through a comic book strip, which is previously something that only happened for me when recalling situations from memory as a comic book-obsessed child of eight. But even for those who aren’t really feeling the comic vibe, it’s still an evolved version of communicating with emoticons and animated gif images.

“We’ve created this scene director that makes composition and drawing decisions based on what’s happening in the conversation,” Nubis cofounder and app co-creator Mark Goodair told VentureBeat in an interview. “So things like the tone, emotion, or even frequency of messages can change artwork in the scene,” he said. Goodair is cofounder of Queensland, Australia-based Nubis Technologies, the company behind this app.

“If someone is sending lots and lots of messages, the scene director will zoom in on that character, especially if they’re the only one talking for a while,” Goodair said.

That means ComiXchat is most definitely not showing you the same rotation of artwork, with only the words in the word balloons changing. It also means you don’t need to send emoticons, because you can change the facial expression of your character. 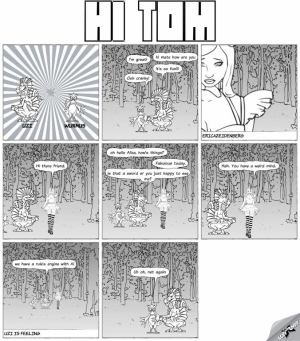 Above: The comic strip conversation saved from a demo of the ComiXchat app in action.

Nubis plans to monetize the app with advertising initially as well as offer a premium paid version with more artwork customization options. Eventually, however, the Nubis team told me they’d like to start offering paid artwork upgrades to generate revenue. Those art upgrades could be done in-house by original ComiXchat artist Otto Schmidinger, or with licensed properties from the comic book universe. So for example, you could purchase a Batman character upgrade so that you’re the caped crusader while talking to friends. Or perhaps a Gotham City scene upgrade, because Batman doesn’t belong in a forest.

The app, which launches today ahead of New York Comic Con 2014, is free for users and available on iOS, Android, and Windows Phone, which should help ComiXchat gain new users since no one will be locked out from communicating. Check out the demo video below for a closer look at ComiXchat in action.