Silicon Valley investor Marc Andreessen once opined that “software is eating the world,” referring to the impact companies coming out of the technology industry are having on businesses that have longed dominated the general landscape. As startups either go public or receive extremely high valuations, their services are changing the way work is being conducted, something that has many businesses unnerved. 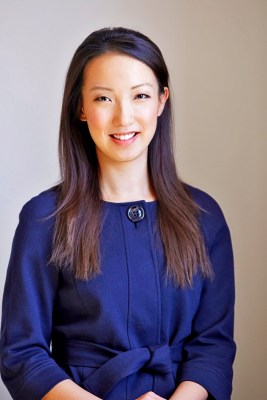 With Facebook, Twitter, Twilio, Snapchat, Salesforce, Apple, Google, Layer, Uber, and other tech companies rising in popularity and capability, traditional companies (henceforth referred to as “incumbents”) find that their customers are becoming more connected and demanding that they follow suit. But that’s easier said than done — lower-tier managers — such as salespeople and social media managers — may get the picture, but what about those higher up, specifically in the executive suite?

The shift that technology has set in motion isn’t a fad, and incumbents need to take action, but often they don’t know where to begin. Hoping to make those changes as painless as possible, Hearsay Social CEO Clara Shih has a new book, “The Social Business Imperative,” that provides a hand-holding guide for companies looking to become more digitally friendly.

The age of the empowered consumer

Although the term “social business” originated with the onset of social media, it has evolved to be more than just having an organization on Twitter, Facebook, and LinkedIn. “Social business is a concept of serving a constantly connected consumer,” Shih explained in an interview with VentureBeat. “Some of the ways you serve [that customer] are on social media, while others aren’t.

“This is about modernization,” said Chris Heuer, a former social business leader at Deloitte and someone who has spent the past two decades helping companies figure out how technology can be used to empower individuals. He described what he calls a  “tectonic shift” in social media connecting the market and “more transparency in society” and concluded that “you can’t have business as usual anymore.”

Social business could be also be defined as digital transformation, something many incumbents realize they’ve been slow to adopt. It’s more than simply building a website so consumers can contact them. It’s about being where the buyers are and relating to their needs. The era of “if you build it, they will come” is over.

“What we’ve typically seen are competitive dynamics that allow a market leader to become complacent, and when they get so big, there’s this ‘too big to fail’ mentality for large organizations. The ultimate time they fail is when no one has to pay them for their goods and services,” Heuer said. 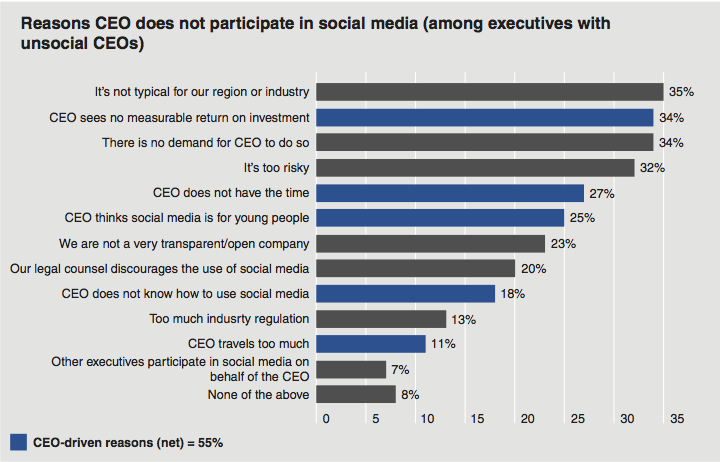 Above: Top reasons CEOs give for not participating in social media.

Shih has been a pioneer in this space, especially during her time at Salesforce. It was there that she became one of the first to develop a business application on top of Facebook’s platform. “She saw no limits to the impact that social could have on business relationships,” reflected Charlene Li, the founder and CEO of Altimeter Group. It was during Li’s time as a Forrester analyst that she came across Shih’s work.

The FaceForce app on Facebook and the success Shih generated from her first book, “The Facebook Era,” propelled Shih to launch Hearsay Social. It was conceived as a way to educate incumbents about how to adapt to the digital world. Li cites two ways Shih has so far changed the conversation:

First, she’s created a company and product that enables this [shift]. Hearsay was an early player in the space, enabling widespread social engagement across an organization. Secondly, she’s a thought leader and author, spreading the concept of social business beyond the reaches of her company. The two are inextricably tied together — it’s the concept that social business lives throughout the organization and isn’t limited to a small group of people that has been the core idea of her work.

Shih says we’re living in the “age of the empowered customer,” where today’s buyers “can access information about your company, products, prices, competitors, and more, all on-demand. Never in history have business-to-consumer (B2C) and business-to-business buyers alike had as much power as they do today.”

A guidebook for business executives

“The Social Business Imperative” isn’t aimed at those in the trenches who are constantly exposed to social media and new technologies. Rather it was intended for CEOs, vice presidents, directors, and those in the upper echelon of a more traditional organization. 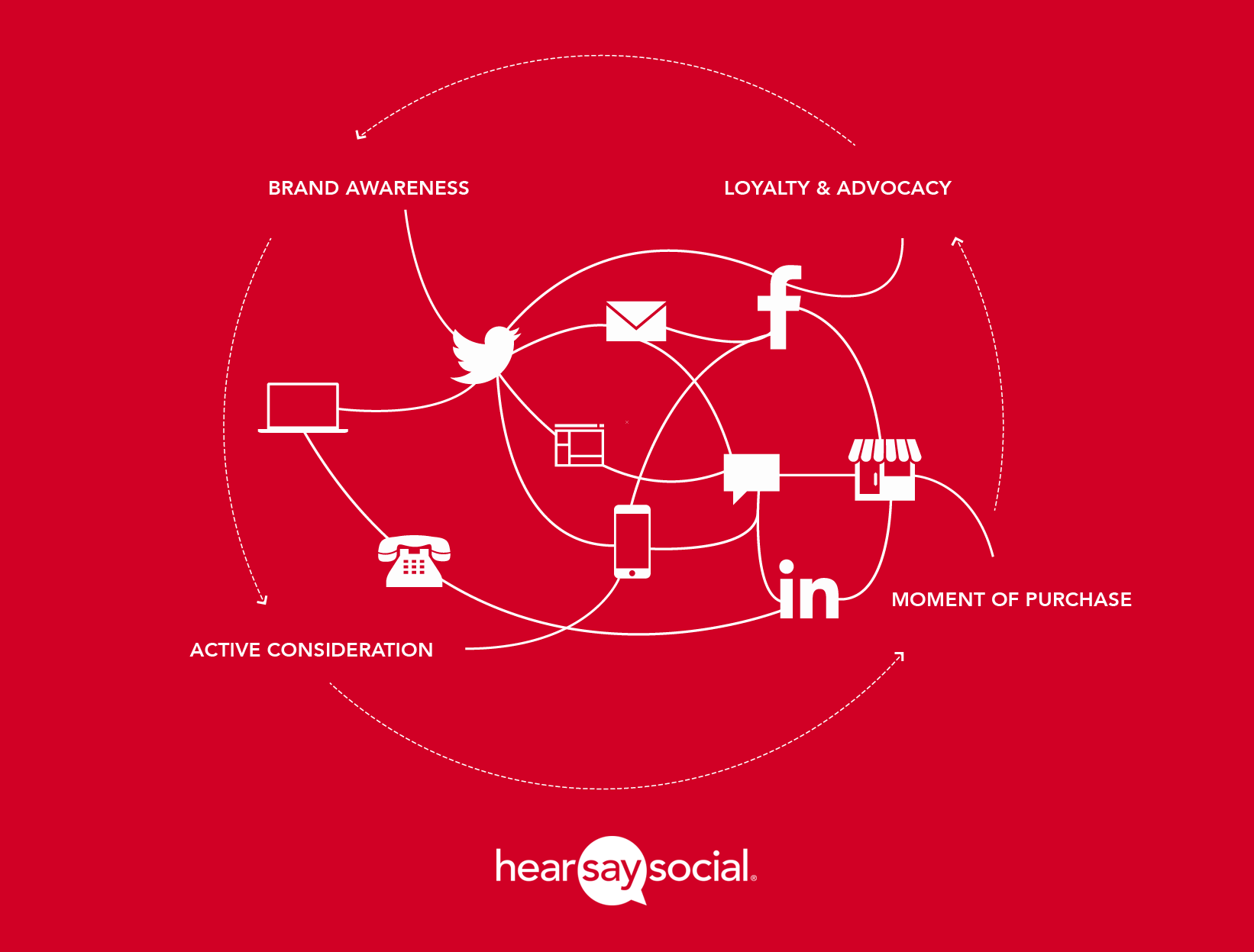 Above: The nonlinear stages of the modern omnichannel customer journey.

Shih explained that there are two insights she was particularly interested in sharing: The first is that there’s an increasing divide between what goes on in Silicon Valley and how real companies operate. With that in mind, “Social Business Imperative” helps incumbents navigate the noise and serves as a translation between the two cultures. Secondly, the book was written to encourage management to work together with social media managers and digital marketers to guide their company to success. While some companies are deploying social business tactics, they’re not always seeing desired results. Shih believes that’s because management has to own the strategy, rather than handing it off to the people executing it.

Shih hopes that the book will give you a firm foundation for understanding the social business space. She said that “if you know the lay of the land and the strategic framework, then you can do the research” to formulate how best to implement a digital transformation of your business.” “Social Business Imperative” is meant to “demystify the overwhelming information” that can be found in the thousands of books out there, most of which are filled with marketing jargon. Above: The four levels of social media maturity and ROI actualization from the Hearsay Social Business Maturity Model and Scorecard

Each section not only offers guidance on how businesses should look at the issues but also provides step-by-step ideas for how to follow through on the advice. For example, when detailing how to execute marketing campaigns, Shih cites five key pillars: Have great content; encourage distribution of that content through employees, customers, and influencers; think mobile-first; don’t forget to analyze the data; and abandon campaign silos in favor of integrating other mediums into the mix.

“The reason leadership has a hard time with this is because of a perceived loss of control,” Li explained. “I say ‘perceived’ intentionally because they actually aren’t in control — when social is ‘blocked’ at an organization, employees simply go around the barriers to still connect with each other.” So whether it’s through social networks, our smart devices, or new software and applications designed to make our lives easier, incumbents need to be prepared to adapt and find ways to relate to their customers.

Leading the charge for change

Shih’s efforts, both as an individual and as a representative of Hearsay Social, have won her many fans, including Starbucks CEO Howard Schultz. In 2011, Shih was appointed to the board of directors at the beverage company, where she offers guidance on technology and digital strategy. At that time, Schultz described her as “a true technology leader” who “will bring fresh insight to our strong and forward-thinking Board. We could not be more thrilled about the social media expertise and ideas Clara will bring to our business as we continue to amplify the online experience and interactions Starbucks has with our customers, partners, and communities.”

A graduate of Stanford University and the University of Oxford, Shih spent time working at Microsoft, Google, and Salesforce before teaming up with college friend Steve Garrity to create Hearsay Social more than five years ago. The company is not a consultancy or an agency like Buddy Media or Wildfire Interactive were before both were acquired by Salesforce and Google, respectively. It’s a software company that has an application facilitating engagement between businesses and customers through digital channels.

“Clara’s success going back to her days at Salesforce has always been about translating technical possibilities to business value and conveying that in a very persuasive way,” Heuer said. “Hearsay does solution selling — you’re not just getting the technology implemented, but it’s configured so you can get the best out of it.”

Investor Ben Parr seconded this idea: “Clara cares about getting things done and building products and companies that work. She’s not flashy, and she’s not looking for accolades. She’s looking for customers and new hires and opportunities for her company. She’s the best kind of entrepreneur.”

Bryan Schreier, a venture partner at Sequoia Capital, shared that what drew his firm to continually invest in Hearsay Social was Shih and Garrity. They all first met in 2010, and Shih and Garrity were “prototype entrepreneurs” that Sequoia wanted to partner with. According to Schreier, “they had impeccable resumes, achieved a great deal in their careers, and were working on a company that’s in a space where they’re authentically spending their time and are concerned with.”

He added: “Clara had already written a book about social business and had real domain expertise…She’s a rare example of a leader who’s a thought leader in a space, and at the helm of a company that’s blazing a trail providing incredible value to their customers.”

Shih’s credentials should certainly instill confidence in company executives who are the target audience of “The Social Business Imperative.” Of course, while the book lays out a decent foundation, the digital landscape is quite vast and one book can’t touch on everything. However, it should be able to do what Shih told us she intended — to start moving things forward so companies can transform themselves and adapt to the changing customer landscape.

“The Social Business Imperative” is on sale now.