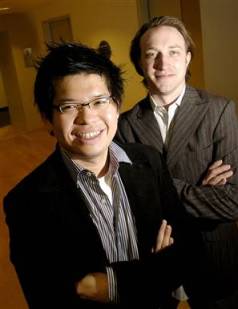 Steve Chen, co-founder of the wildly successful video sharing site YouTube, sold the site to Google in October 2006 for $1.65 billion. No doubt he’s since internalized Google’s “Don’t be evil” ideology, at least as a talking point. But in January of that year, Chen’s thinking was exactly the opposite. In the text of an instant message to a YouTube product manager, he used the e-word.

Here’s the quote from a court brief filed by Viacom in that company’s lawsuit against Google. The suit claims Google knowingly allowed Viacom-owned copyrighted content to appear on YouTube three years ago, in order to boost the site’s popularity. (Emphasis added.)

“In a January 25, 2006 instant message exchange, YouTUbe co-founder Steve Chem (IM user name tunawarrior) told his colleague YouTube product manager Maryrose Dunton (IM user name maryrosedunton) that he wanted top “concentrate all of our efforts in building up [YouTube’s] numbers as aggressively as we can through whatever tactics, however evil,” including “user metrics” and “views” and “then 3 months, sell it with 20m views per day and like 2m users or something … I think we can sell for somewhere between $250m – $500m …”

The sad irony of this story, as VentureBeat writer Kim-Mai Cutler pointed out earlier today, is that neither Google, nor YouTube, nor Viacom have ever figured out how to actually make a profit from content on YouTube. That includes the Viacom staff who, rather than trying to sue YouTube, were posting their divisions’ content onto the site in hopes of marketing it virally.