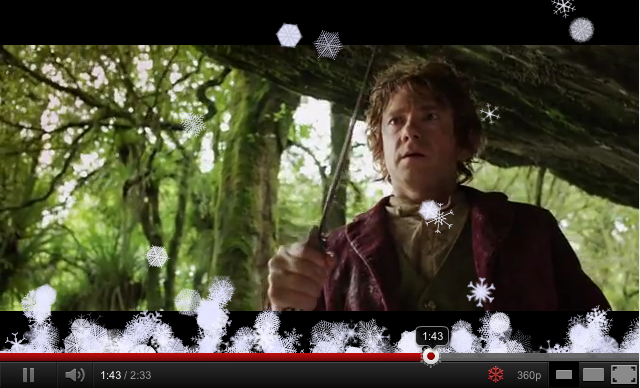 Overall, the majority of the country has experienced a pretty mild winter this holiday season, which means there isn’t much fluffy, white snow falling. The same cannot be said for YouTube videos.

The Google-owned video sharing community site has added a temporary snowflake button that allows you to control the level of frosty precipitation within your video player. The feature is available on most videos, but some still don’t have the ability to manipulate the weather.

Obviously consistency is very important to the YouTube staff, which is why they’ve also changed the progress bar’s cursor into a snowflake as well.

This isn’t the first time YouTube has changed some of the site’s user interface elements due to a special event, popular meme or trending topic. The site previously added a rainbow progress bar and tiny pop-tart kitty cursor to the original Nyan Cat video meme. Other amusing additions include the YouTube Vuvuzela button during the World Cup soccer tournament, an xkcd web comic inspired playback option for comments, as well as the Onion News Network parody of YouTube’s “Actually Good” tab.

YouTube encourages its engineers to slip in these kinds of quirky features, the company told me in a previous interview. The person responsible for the most recent quirky feature (or random act of awesomeness) is even awarded a temporary trophy.