There are mobile apps for taking notes, for keeping fit, for toilet-users to communicate … apps for just about everything. But some apps add such great functionality to a smartphone that sometimes I wonder whether they should be offered by manufacturers / operating systems “out of the box.”

So I trawled the hundreds of apps I’ve installed, and compiled a “top 10” of the ones I feel wouldn’t look out-of-place integrated into a phone’s inner workings.

It’s worth noting here that these aren’t necessarily the best built or designed apps out there — it’s more about the core functionality. Plus, there may be better alternatives out there already than the ones highlighted here — these are examples of features that could or should come standard in all mobile phones.

Did you know that staring at a computer or smartphone screen for extended periods of time can impact your sleep? Research has shown that the “blue light” emitted from screens is particularly bad at night, which is why apps such as F.lux for desktops and Twilight for Android have proven popular.

In a nutshell, these apps alter the color of your display to suit the time of day, so that they automatically change to a “warmer” color at night, and brighten up during daytime. 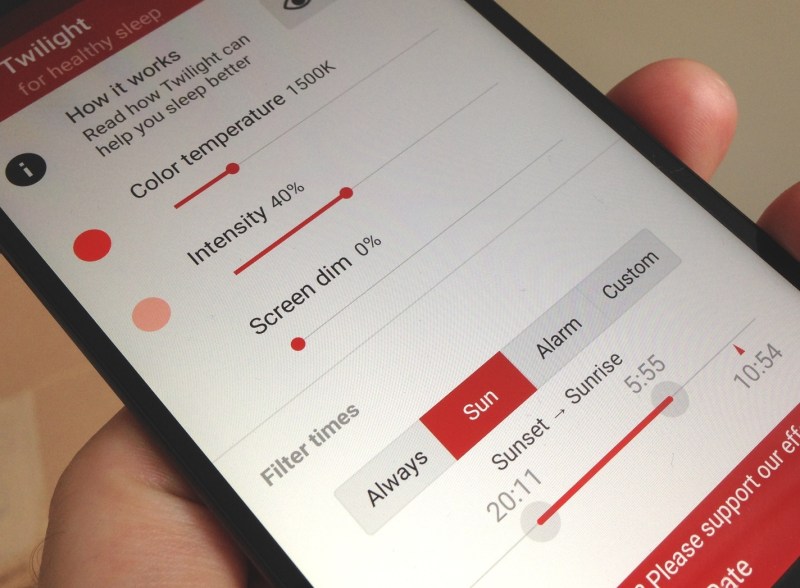 Above: Twilight for Android

F.lux also has a version that works on jailbroken iOS devices, but it would be good to see manufacturers getting on board with a “blue light” solution. This should be chiselled into the very fabric of digital devices.

Vertical videos have been the bane of the Internet for a long time, and with the proliferation of mobiles as a primary viewing platform, it’s not going away anytime soon.

Vertical video syndrome, or “VVS,” happens when people shoot videos on their phones while holding the device in a portrait position, rather than swivelling it around into landscape. This is fine if the video is viewed on another mobile device, but if it’s uploaded to YouTube, then kittens die and the whole world comes crumbling down.

Horizon is one startup setting out to combat VVS, with an Android and iOS app that lets you shoot horizontal videos (and photos), regardless of the orientation in which the device is held. It does this by using a phone’s built-in gyroscope to “auto-level” the image, and if you’re filming in landscape mode but then switch to portrait halfway through, it keeps shooting in horizontal.

The result looks seamless to the casual viewer, and it is pretty clever technology, however, it is worth noting that because of the way the app renders vertically shot video into a horizontal format, the end result is not quite as good quality.

That said, there’s no real reason why such a feature couldn’t be built directly into a phone’s camera. That way, if a user does decide to upload a video to YouTube in spite of having originally intended for it to be viewed purely on mobile, it won’t look quite so bad.

We’ve all been in this situation: You’re on the phone to the cable company, trying to figure out why on earth you can’t watch the big game, when they ask you to write down a reference number to quote if you call again.

Fumbling around for a pen, you place the phone down on the table, completely oblivious to the fact that the operator is still divulging key information to you. This is where SpeakerPhone Ex for Android can be invaluable — it detects when the phone is next to your face, so that when you pull the phone away it switches to speakerphone automatically. And vice versa when you return the phone to your ear. 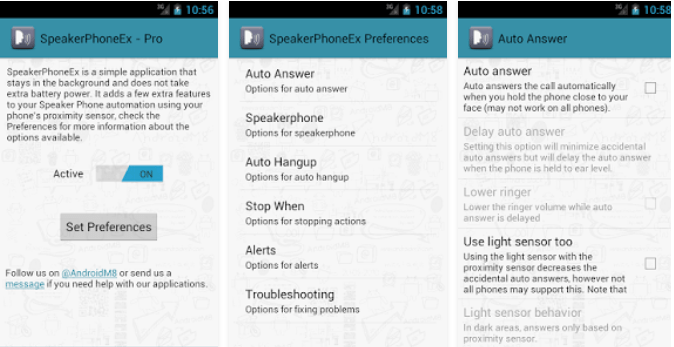 Additionally, the app lets you auto-answer a call when you hold the phone to your face — just one less fumbly step in the phone-answering process.

This would be a great feature to have built into the phone app on any device, rather than having to rely on third-party providers.

4. SwiftKey: Typing should be easy

Typing is probably the one thing you do most on your phone — be it while searching for a product on Amazon, messaging your friends on WhatsApp, or adding an item to your to-do list. But the truth is, most stock keyboard apps blow.

Android has long permitted third-party keyboard apps on Google Play, which has helped companies such as SwiftKey build solid businesses. And Apple opened things up to third-party keyboards last year. While there are many benefits to such apps, including predictive texting that not only second-guesses the word you’re trying to type but also the next word in the sentence, the main selling point for me is the “swipe” typing.

SwiftKey Flow lets you glide your finger over the keyboard from letter to letter, only releasing to start a new word. More often than not, it gets the word right.

SwiftKey wasn’t the first to introduce this feature — rival Swype also offers it — but SwiftKey is the app I’ve long adopted, and it’s usually the first app I install when I procure a new phone.

Some original equipment manufacturers (OEMs), such as OnePlus, offer SwiftKey as a default option when you’re setting up your phone for the first time, and Swype, too, has been offered as an option with some OEMs. But if such a feature was built into a phone’s stock keyboard app, people would be far more likely to use it.

Swipe-based typing is such an incredibly more efficient way of typing, I’m not sure why anyone would want to use anything else.

If you’re anything like me, you’ll no doubt have hundreds (or thousands) of photos on your phone that sit there, building up, until one day your storage runs out and you’re finally forced to filter, edit, upload, or print. And this is where the likes of MyRoll and Gallery Doctor, two apps developed by the same company, can help.

Available for Android only just now (the iOS incarnation was inexplicably pulled some time back), MyRoll is basically a smart gallery app that automatically organizes your photos and videos into “moments,” surfacing the best images based on its algorithms.

Gallery Doctor, available on Android and iOS, is all about digging out your worst photos. It scans your camera roll (and iCloud), identifying the ones that are blurry, duplicates, badly lit, or just plain-old boring, and makes it easy for you to delete them. 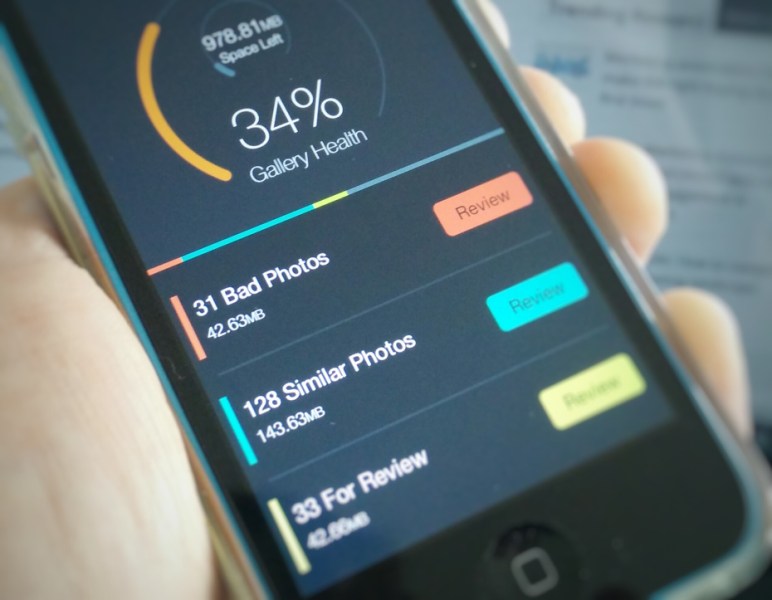 While the camera apps that are bundled with phones are more than adequate for most people’s needs, they generally don’t offer any tools that help users manage their gargantuan library of selfies, cat shots, and coffee snaps. It would be nice to see “smarter” photo-management features come standard in phones.

Though your smartphone is your own personal computer, it is also a telephone. That’s right, a telephone. This also means you probably get a ton of unwanted or anonymous telephone calls from call centers, scammers, and general spammers. And this is where Truecaller helps.

Truecaller is like a giant crowdsourced telephone directory. It lets the Truecaller community flag spam or nuisance callers, or put a name to a number so that anyone else who has the app installed can see instantly who’s calling them — irrespective of whether that number is saved to a user’s local address book or not. Truecaller lets you block callers automatically, too. 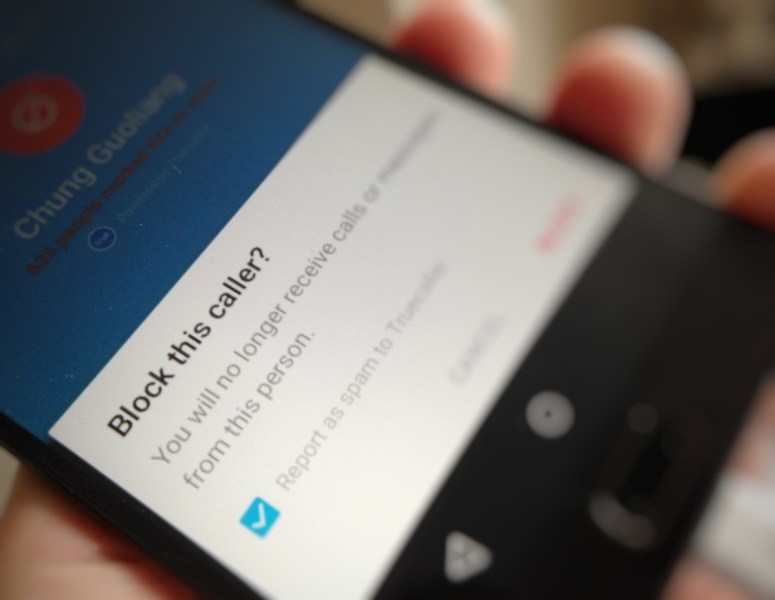 The Swedish company recently inked a deal to preload the app on Cyanogen OS (Android) telephones, a deal that will see Truecaller’s spam-blocking and caller ID features built into the OS dialer on all its future devices. Truecaller has previously inked deals to install the app with other manufacturers too, including Nokia/Microsoft, Alcatel, Lenovo, and LG.

But it would be good to see similar technology introduced by default in all phones.

7. Shush! Silence your phone for a set period of time

Have you ever silenced your phone when going to the movie theater or to bed, and simply forgotten to turn it back on again? Yup, you’re not alone. And it’s this scenario that Shush for Android was built for.

When you silence your phone, Shush pushes up a message asking you how long you wish to keep it silent for — this could be anywhere up to 24 hours, or indefinitely. You can even stipulate the volume-level when Shush reactivates the ringer. 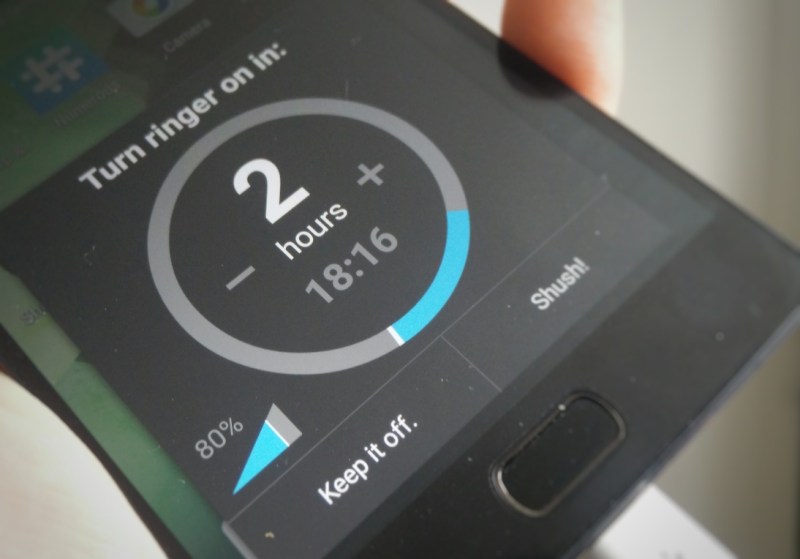 It’s only when you start using the app that you realize how useful it is. And it’s something that would likely go down well as a core smartphone feature.

As screens get bigger, phones become more like personal computers. Thus, they should offer core functionality that lets you use them like a traditional computer, without interrupting your experience. With that in mind, indie Android developer Chris Lacy has produced a nugget in the form of Link Bubble.

Link Bubble is something of a revelation in terms of how you use the Internet on your smartphone. It’s like a mini browser that loads pages in the background when you click on a link within any app — it basically saves you from staring at “redirect” screens, while also letting you load multiple “tabs” to read once you’ve finished what you’re currently doing.

It’s a very useful app, one that wouldn’t look out of place integrated into a phone’s stock browser.

On a side note, Lacy has produced another Android app called Copy Bubble, which is basically a floating clipboard. While it may be more geared toward power users, it offers a useful way of accessing multiple chunks of text you’ve copied from within a Web page.

Digital security is important, which is why more and more devices include features such as fingerprint scanners. But there’s still a place for trusty old passwords, too.

SkipLock for Android has long served as a great example of how all phones could offer more convenience by default, while also being security conscious.

Google actually did take note — the Internet giant introduced new Smart Lock features with Android 5.0, including “trusted devices” and “trusted places.” As such, Skip Lock is more or less redundant now for those using Android Lollipop.

While Touch ID has made unlocking iPhones pretty darn easy, it would still be useful to see more automation brought to the mix.

10. Gravity screen: Turn your screen on / off automatically

While most phones let you stipulate when your screen switches itself off — e.g. “after 5 minutes of inactivity” — it would be great if phones were smart enough to turn screens on and off automatically, based on when you’re actually using them. Gravity Screen for Android does exactly that.

The app sports a pocket sensor mode that switches the screen off when, well, you put it in your pocket. It also has a table sensor mode, so that when it’s placed horizontally on a flat surface, it guesses that it’s not being used. It can then turn itself back on again if you move it, and keeps the screen on while it’s in your hand.

This may not be for everyone, but it is a convenient tool to have available on a phone for those that wish it, and it would be great to see such a feature included by default.

There are many reasons why these apps may be better as downloadable, standalone entities — perhaps not everyone wants the features, or an OS could become “bloated” if it has too many features. On the flip side, deep integration can often make such apps perform better, while many users may be hesitant to give full device access to third-party developers.

Anyway, these are just some of the apps I think would work well integrated into the fabric of phones. Which ones would you include in here?