Amazon has unveiled the Amazon Tap and Echo Dot, two new additions to the Alexa-enabled device family. The former is a $130 portable version of the Amazon Echo and works as a speaker for Bluetooth and Wi-Fi, while the latter is a $90 compact, voice-controlled device that can easily connect to your speaker. Both can be preordered today, but there’s a catch: While the Amazon Tap is available on Amazon.com, the Echo Dot can only be purchased through an Alexa device (e.g. “Hey Alexa, order an Echo Dot.”)

The company also released a new developer API that enables its devices to integrate with smart thermostats, like those belonging to Nest and Honeywell. In addition, an Alexa SDK is now available to enable any device to respond to voice commands. 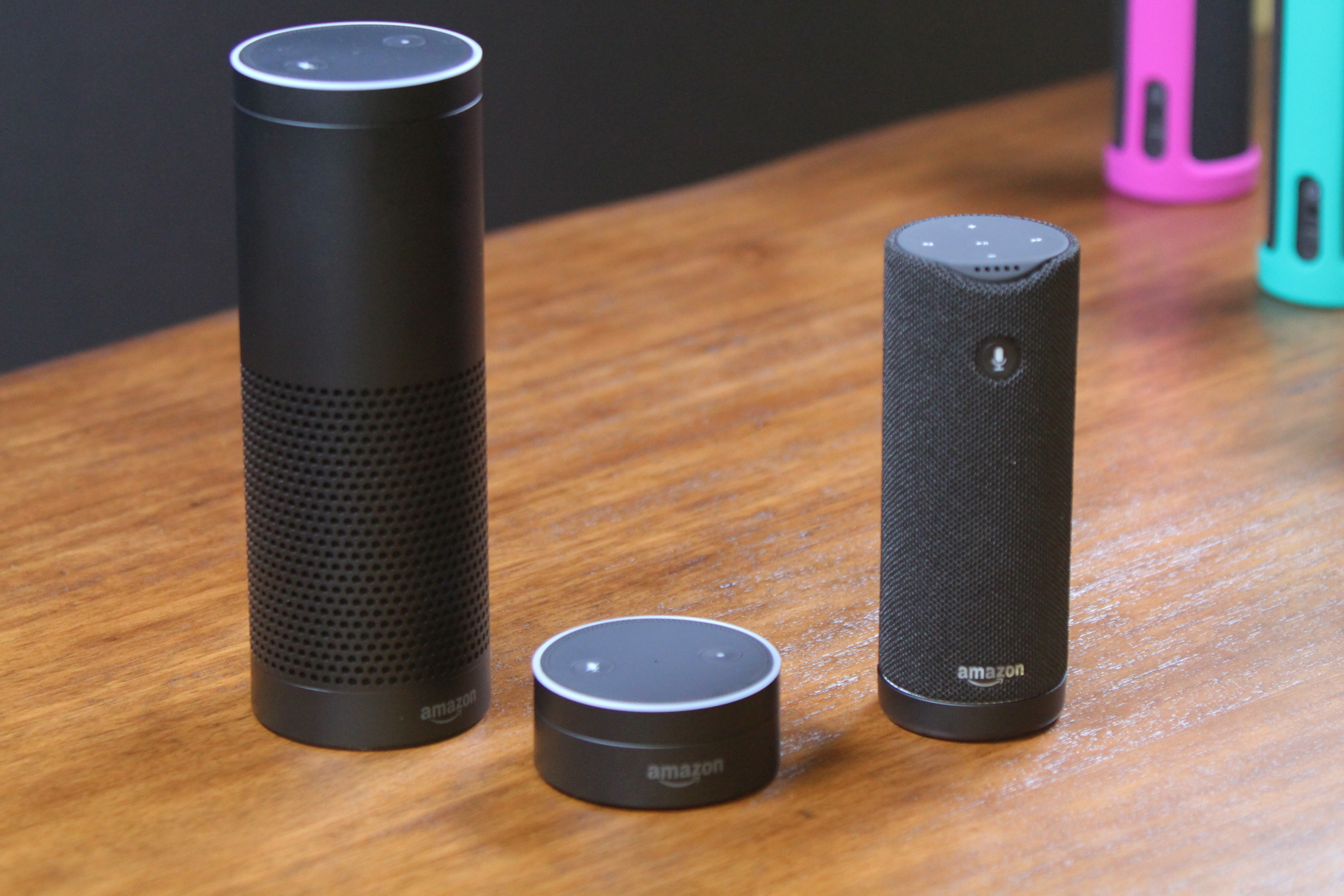 Above: From left to right: Amazon Echo, Echo Dot, and Tap

“Our original vision [with Amazon Echo] was to build a computer in the cloud that’s controlled by your voice,” said Amazon senior vice president of devices David Limp. “We believe the next big platform is voice.” And while customers have left more than 20,000 five-star ratings and reviews for the inaugural device, others saw room for improvement.

One of the most common requests was for a portable version of the Echo device, which is how Amazon Tap came into being. The voice-assisted device, first reported in January, bears similarities to the Jawbone Jambox or Apple Beats Pill speaker. Weighing 16.6 ounces, Amazon Tap is Bluetooth and Wi-Fi enabled, with dual stereo speakers, 360-degree omni-directional audio, and the same voice command features you get through Alexa. 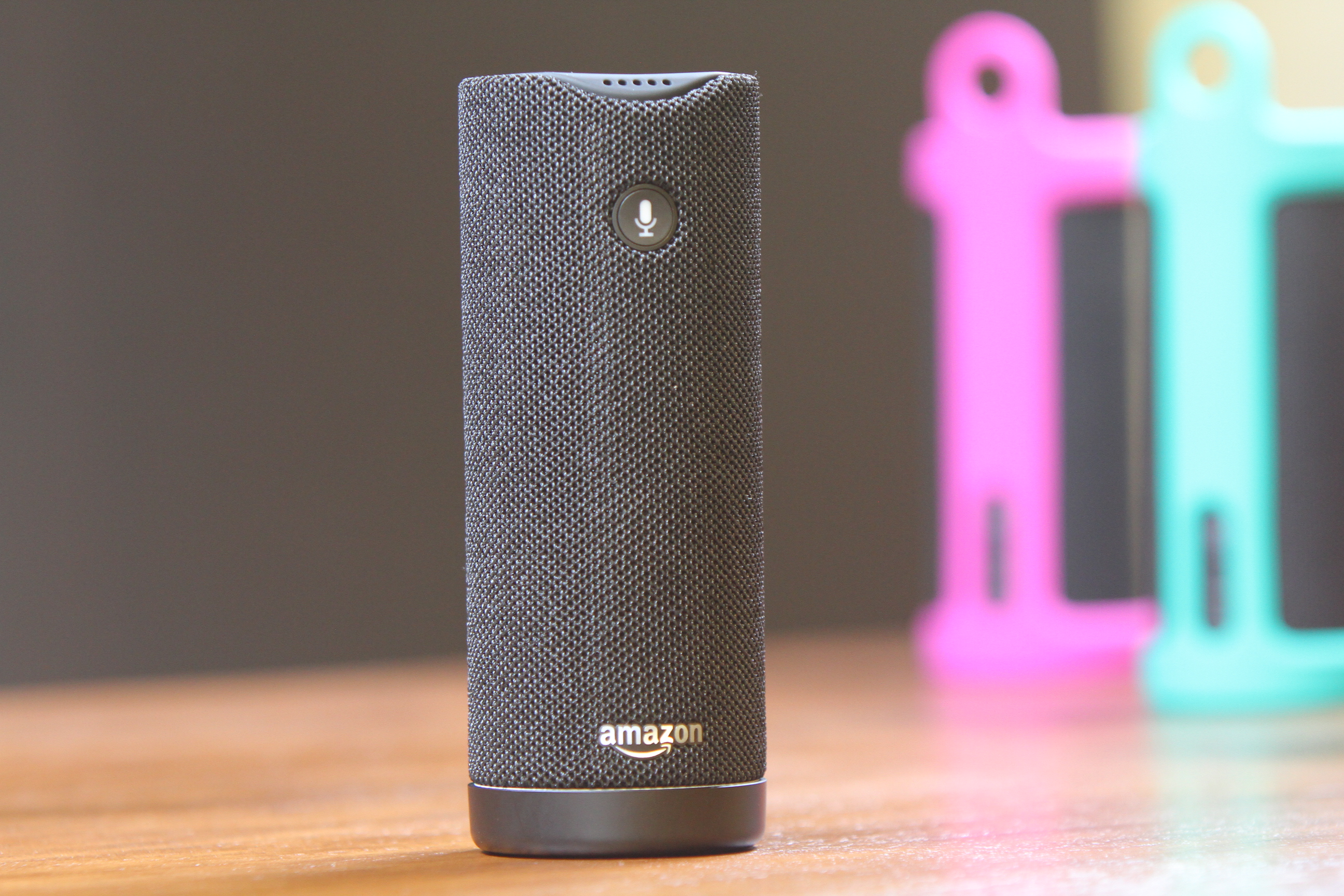 To use the device, just turn it on by pressing the Echo Go button and connect to the Internet with Amazon’s Alexa App.

It has a battery life of 9 hours with continuous playtime and 3 weeks if left on standby. Amazon Tap comes with a cradle that makes it convenient for customers to charge while on the go.

Amazon will begin shipping the Amazon Tap out to customers at the end of this month.

At $90, the Echo Dot is certainly cheaper than Echo, but it has inherited many of its older sibling’s features, such as far-field array, which allows it to understand voice commands from 20 to 25 feet, even in noisy environments; a light ring to show when it’s listening; and more.

Amazon believes that this miniature device (1.5-inches x 3.27-inches x 3.27-inches) is ideally suited to several instances, particular for those who prefer to use their own speakers. The Echo Dot has a line out connector that lets you plug in an external audio output device. It can also pair with Bluetooth-enabled speakers to play music from Prime Music, Spotify, Pandora, iHeartRadio, and TuneIn. Limp said that this was one of the biggest use cases Amazon saw, as many people prefer to use their own speakers with the Dot. (Some parallels could be drawn to the Chromecast Audio.) 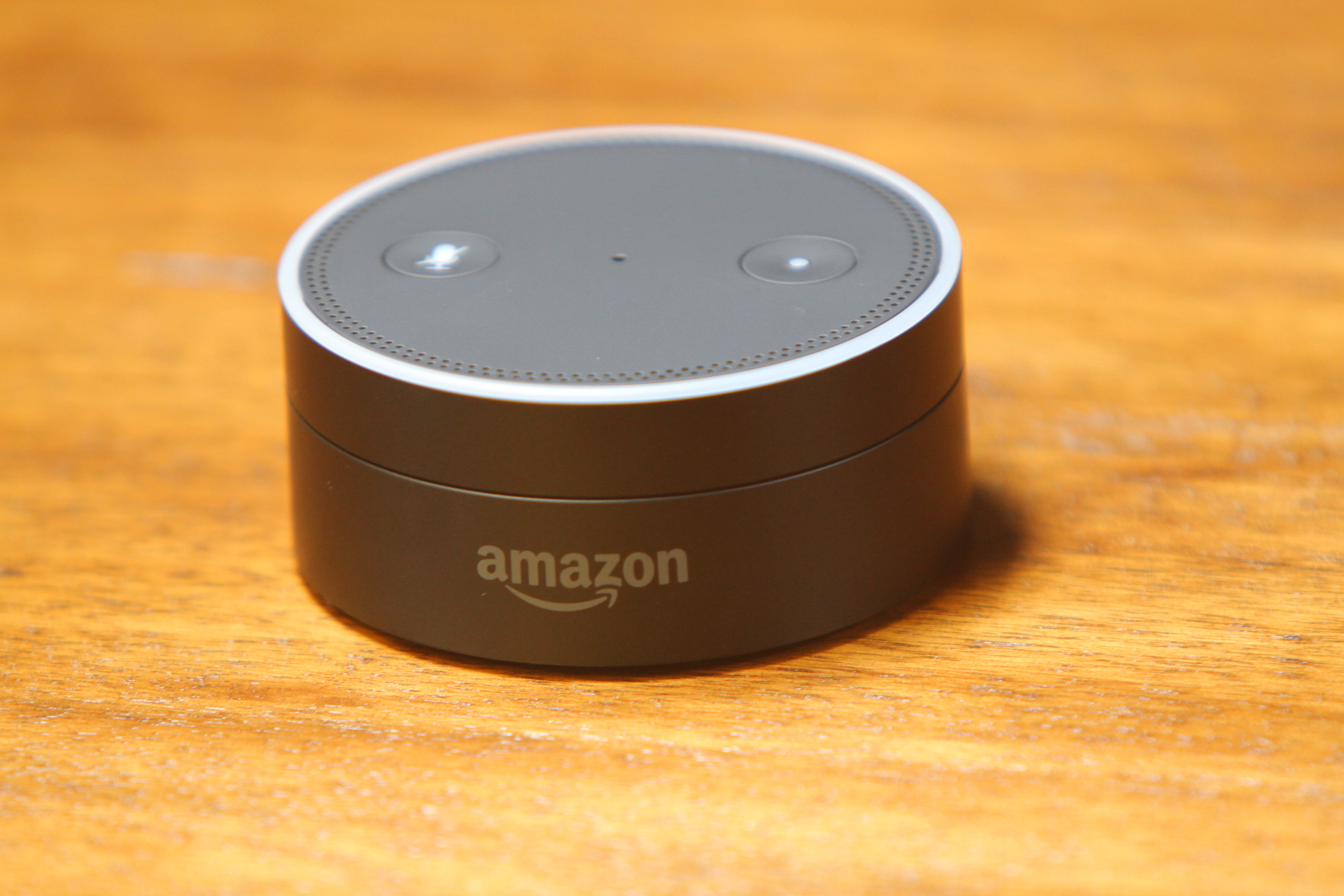 People can also opt to use the device as an alarm clock, or to help control lights, thermostats, and other connected objects.

Why not get both?

The Amazon Echo is pretty much stationary in one part of your home, as disconnecting it and moving it to other areas just to get the voice commands is impractical. But if you’re looking to have multiple Alexa devices, spending $200 on each can become quite expensive. The Echo Dot is a more affordable option for those who are cost-conscious but want to extend the Alexa’s coverage.

While preorders for the Echo Dot begin today, you can only get it through one of the other Alexa-enabled devices, like the Echo, Amazon Tap, and Fire TV. Limp also said that in the short-term, each Amazon account will be restricted to just two Echo Dot devices, due to limited quantities. There’s no indication of when it’ll open up more widely. The company will begin shipping it later this month.

Doubling down on voice

Amazon’s first attempt at building a voice-controlled device came in 2014 with the launch of Echo. Since then, improvements have been made to fine-tune its responses. This responsiveness is something that the company measures. The bottom line is: Does it know what it’s supposed to do? “This is the bar that people expect in the home,” Limp explained. 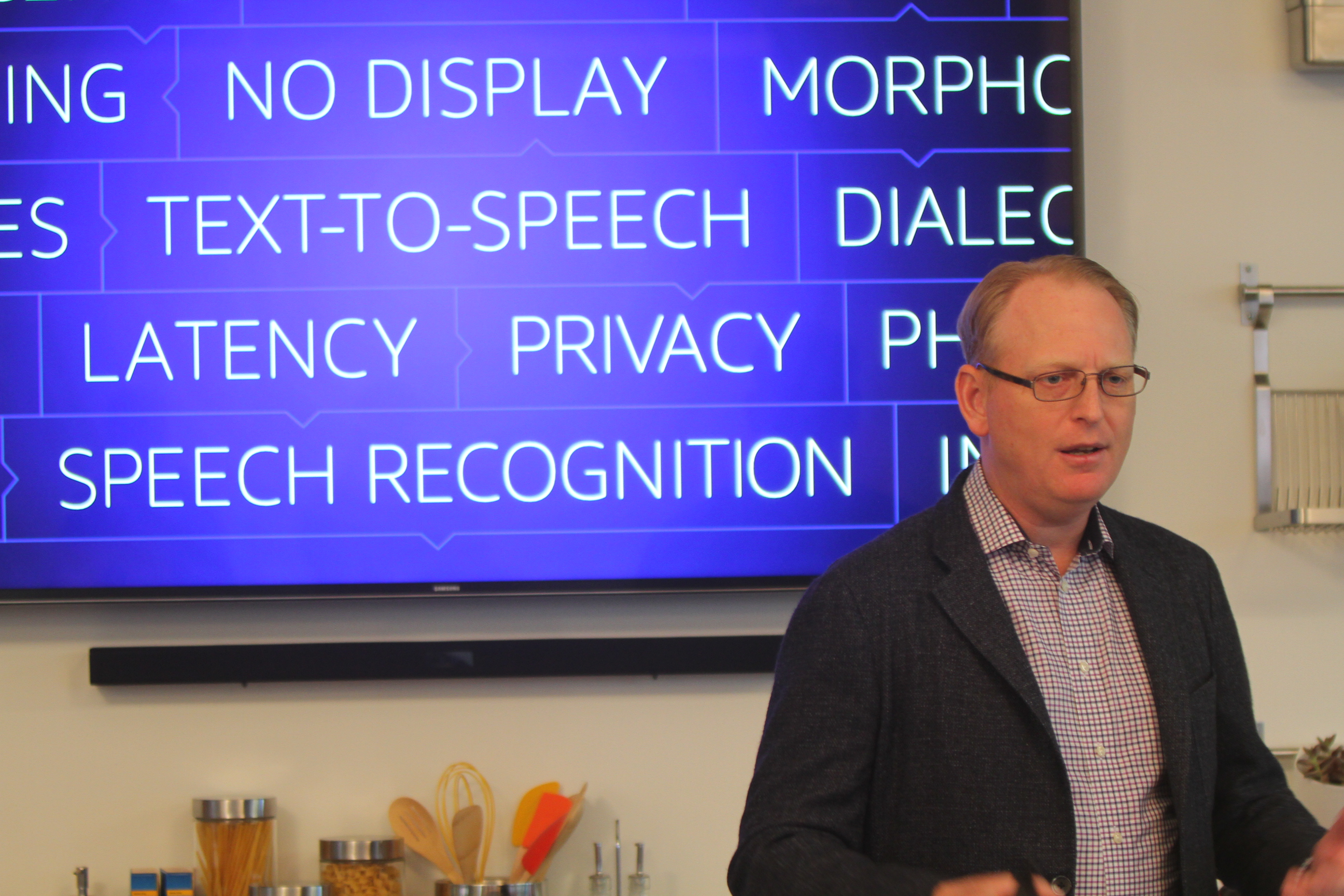 He spoke about the different challenges the company has had to overcome to make sure that customers are satisfied. One of these centered around privacy, as some people were uncomfortable with the idea that Echo is constantly listening. Limp said his team was sensitive to the fact that there was now a “microphone in the home.” To address that concern, Amazon engineered the device so that it can be electronically disconnected when the mute button is pressed. The light ring on the top of the Echo or Echo Dot indicates when Alexa is listening. But since it isn’t always listening, Amazon’s devices needed some way to recognize when you’re talking to it. This led to the use of a “wake word,” which is customized by each user.

The company also dealt with the device’s difficulty understanding voice commands in certain situations, such as in noisy environments. Limp demonstrated how difficult it would be for Alexa to pull vocal instructions out with a fan or music in the background. Solving this meant the addition of technology to isolate what a person is saying. And processing those commands can still be tricky because computers have a hard time understanding the context of a statement.

Turning text into speech and making it sound natural instead of mechanical was another thing Amazon had to work on. In real time, Alexa takes a sentence as it’s read out and turns it into little chunks before stitching them together with audio clips so the rhythm sounds more normal to the human ear. 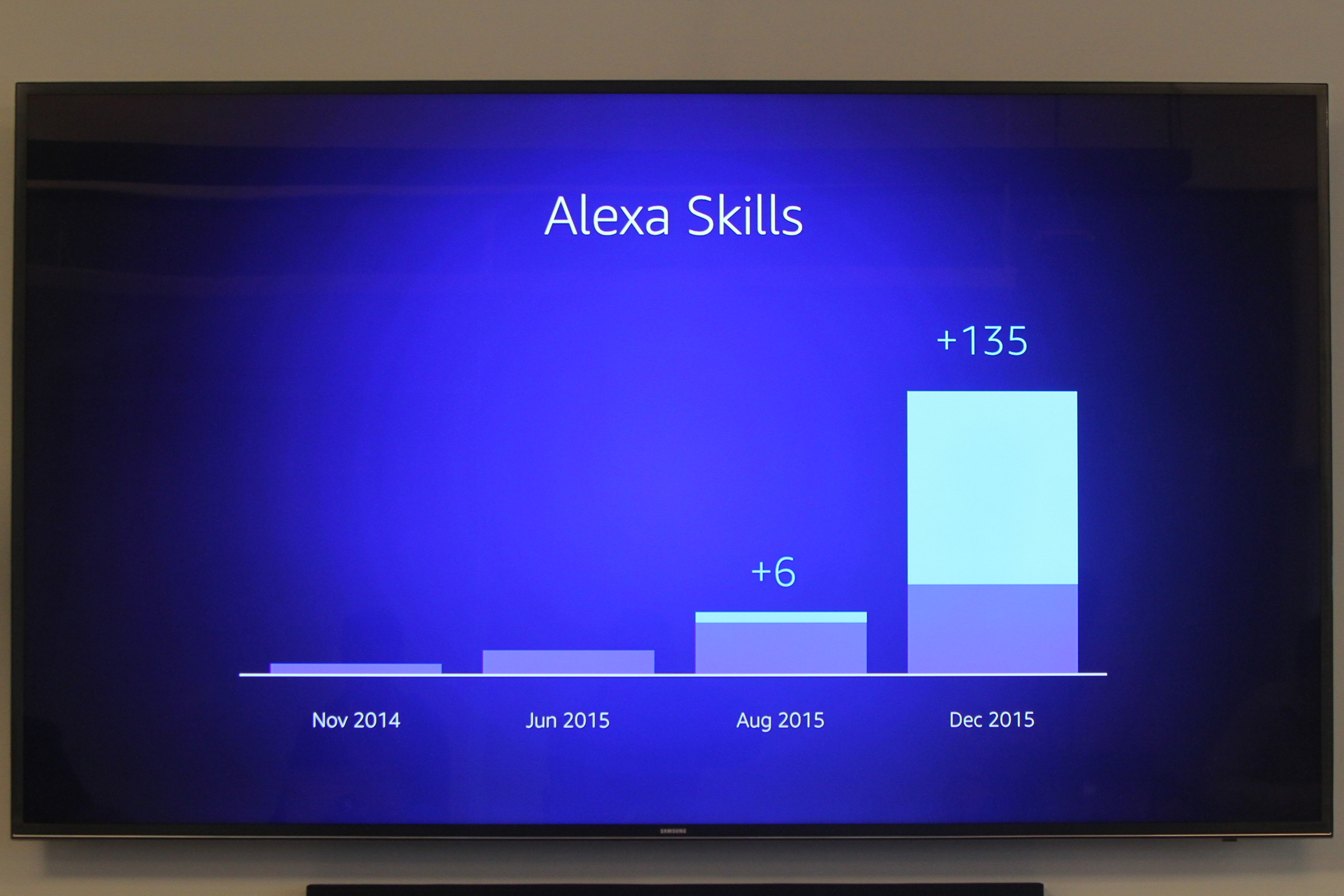 Above: A chart detailing the growing number of skills being added to Alexa since launch to March 2016.

At launch, Alexa was limited to 13 skills, including setting timers, playing Amazon Music, and telling you the weather. However, the list quickly grew, thanks to third-party developers. “If we’re truly going to believe our vision and that Alexa will be a platform, it has to be open,” Limp said. The company has seen rapid momentum in development and reports that, as of this month, there are 303 third-party skills available on Alexa.

That leads us to the final piece of Amazon’s announcement today: the addition of two tools aimed at accelerating this development. The company said that in the feedback it received, developers were looking for better APIs around specific skills. One focus was on the smart home, which resulted in the creation of a Lights API to control lightbulbs (such as Hue and WeMo). Another idea led to a flash-briefing skills API that combs through a personalized list of notes from The Wall Street Journal, National Public Radio (NPR), Huffington Post, and others.  A third skills-based API supported by Alexa deals with thermostats. With the inclusion of this API, developers can make it possible to control home temperature using voice commands. The Thermostat API currently supports Insteon, Nest, and Honeywell. 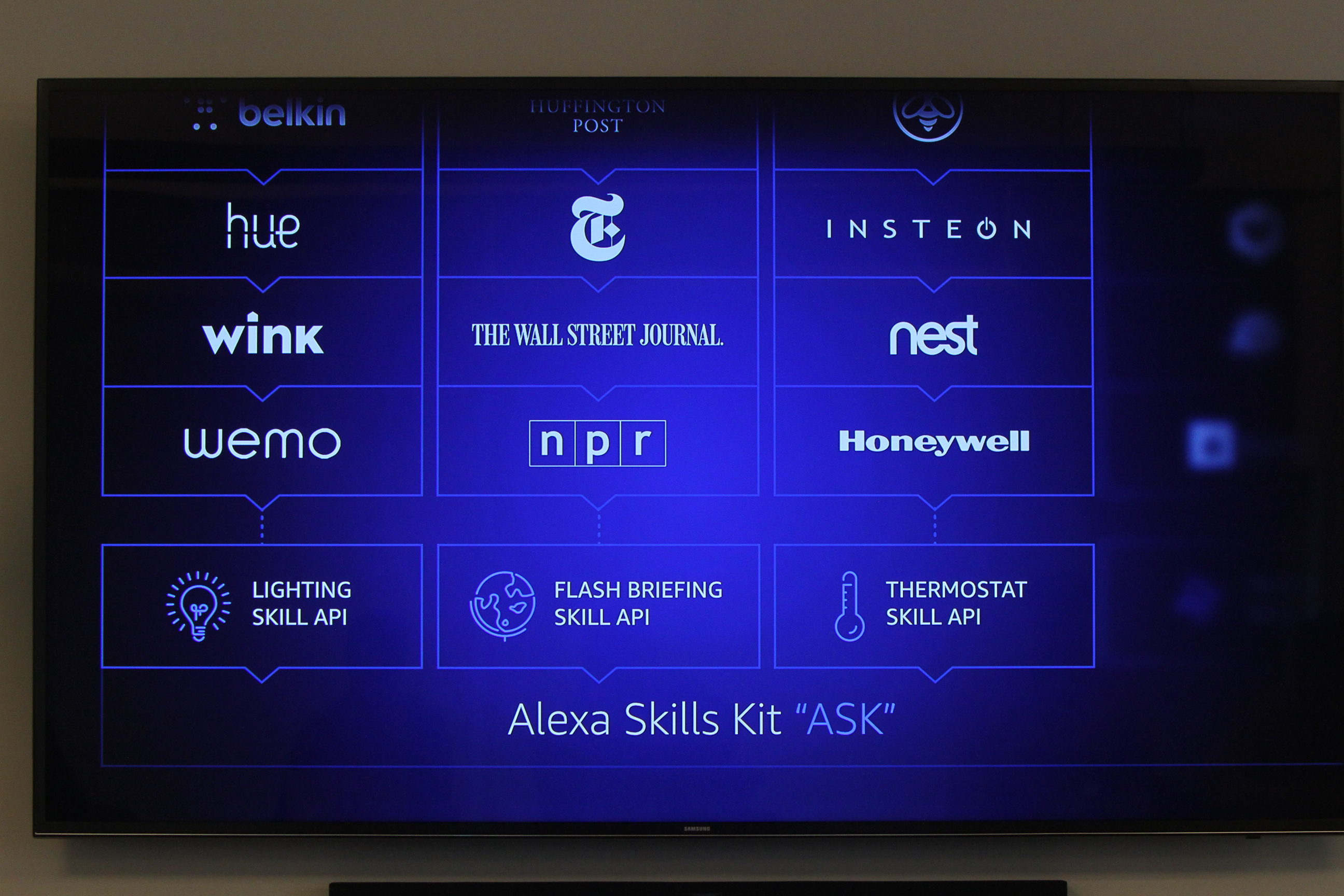 But as more and more devices in the home become connected, the options need to continue expanding. “We know that the kitchen isn’t going to be a homogenous environment,” Limp remarked. “Everything in it is built by different companies. In this world, you can’t rely on someone like Amazon to build all those devices and control it by a single platform.” If you want any device or appliance to be Alexa-enabled, you may want to look at the company’s Alexa Voice Service (AVS). It’s an SDK that connects hardware to the cloud to receive all the power of the platform. Limp claimed it’s free, simple, and self-service. “We’re lowering the friction for developers to use Alexa. Over time, our hope is that, like Amazon Web Services (AWS), we can offer the best low-cost friction-free service, and developers will use it.”

Both of those tools are available today.

It’s apparent that Amazon will continue to work on improving Alexa by not only adding more skills and helping it expand into other devices beyond its own, but also by better understanding how people are using it. The debut of Amazon Tap and Echo Dot are part of the company’s efforts to do more research into use cases, while also gaining the benefit of customers ordering things through these devices. 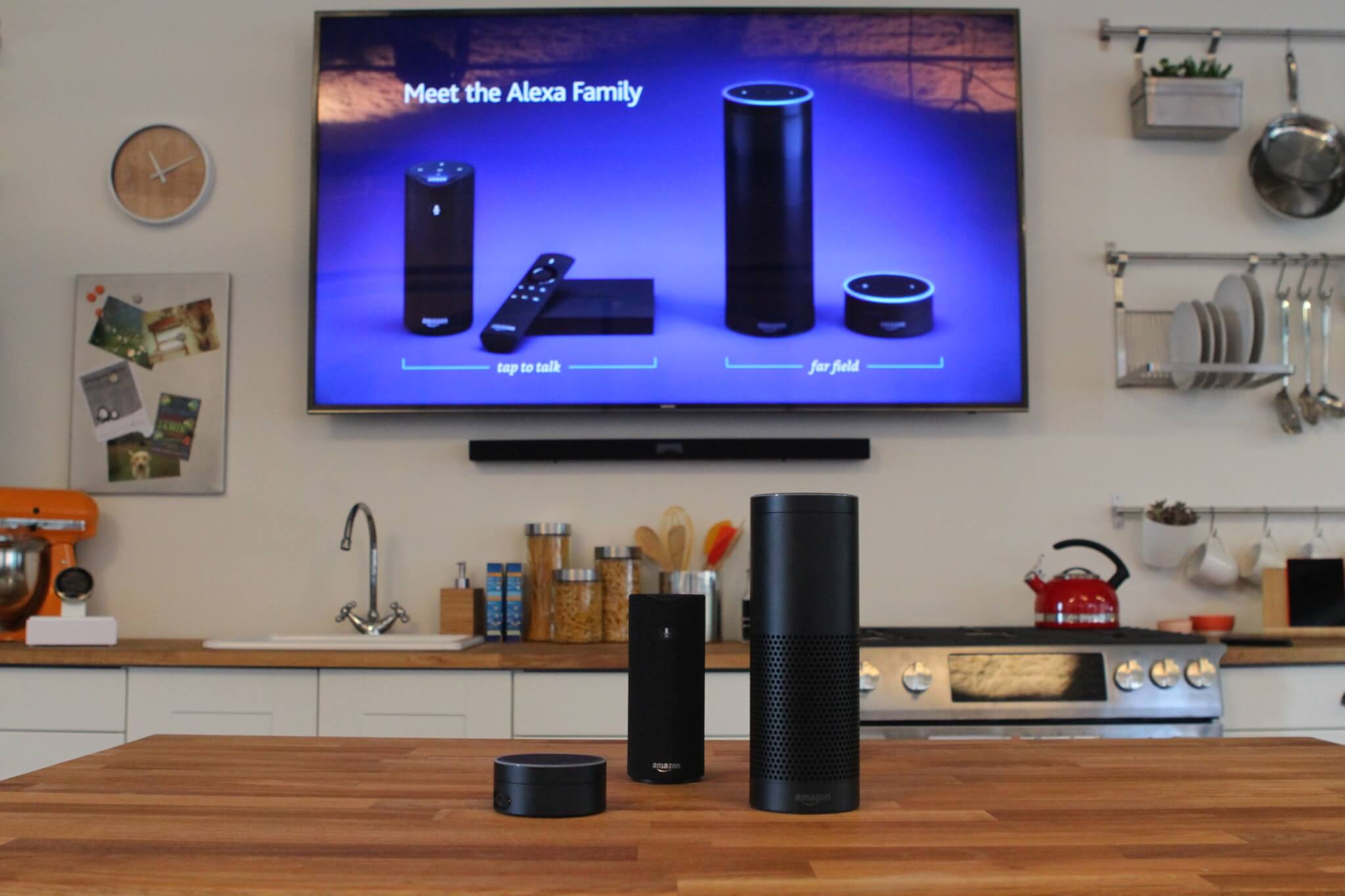 If you ask someone at the company about the progress of Alexa and Echo, they’ll likely say they’re pleasantly surprised. Limp said that when you invent a first-generation product, you often can’t use customer feedback because those potential customers don’t have a good sense of the upcoming tech. So what Amazon does is reverse engineer everything, meaning it starts with a press release, and has teams debate it, refine it, and then tackle the technical challenges in order to get to the finished product. While the process took a bit longer than expected, Limp’s pleased about where the marketplace is heading: “We’re optimistic about what’s happening right now.”