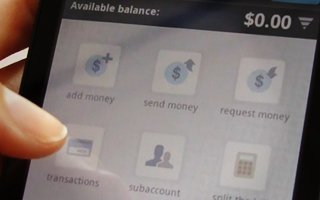 See below for a video I made about the product and its rock-show promotion tent.

Serve combines mobile, online and offline payment features and targets users who rely heavily on their mobile phones, whether that’s young and tech-savvy users or users in developing areas, where people are more likely to have a phone than a computer. Serve accounts can be funded from a bank account, from a debit or credit card, or by receiving money from another Serve account.

At the festival, Serve was being served with a heaping side of skeeball and beer, not to mention rock band performances, in the American Express “Barcade,” so I stuck around to talk to American Express employee Charlotte Fuller about how Serve compares to other products in the space and how the platform’s userbase is shaping up so far.

After all, Amex is a relative latecomer to the game. Mobile payments, be they nascent and sometimes less than secure, have been around for a while and many a startup is scrambling into the space — Paydiant, Jumio and Payfone are a few well-funded examples that spring to mind.

And competitors aren’t just scrappy startups; heavyweights such as Visa, Microsoft and Google are also racing to bring us a mobile payments future where wallets are obsolete, NFC rules the day and no one ever gets hacked.

Still, American Express and Serve have the power to compete well in the space, if only because of the company’s massive brand recognition and trust. Fuller told us that Serve operates a lot like a startup within the larger company, but the main difference between a typical startup and the Serve gang is a simple matter of ammunition. If Serve needs users, Amex can pull out all the stops and get those users; money isn’t as much of an object. Fuller couldn’t comment on exactly how many users or how much activity the product was seeing so far, but she did say American Express was pleased with early results.

Fuller said she can see the day coming when consumers no longer need wallets. In fact, one study named 2013 as the year mobile payments become mainstream.

Want to see what Serve looks like in action? Check out my interview with Fuller in this original VentureBeat video.