Here’s a question: How did you discover the last app you downloaded? If Hubbl founder Kushal Choksi is right, you probably didn’t search for it.

“The biggest issue for the app world is that search-based app discovery is broken,” Choksi said.

While that may not be the biggest deal for users, it’s a huge deal for app developers, most of whom continue to struggle as the Instagrams and Foursquares of the app world continue to dominate conversation. 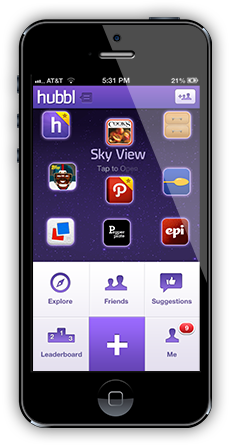 In short, welcome to the tough, expensive world of the long tail.

“Developers are spending a lot of money promoting their apps, but they are not getting relevant users. The context is missing,” Choksi said.

So what’s the fix? Choksi says it’s a complete reworking of the way people discover and download apps. That’s the goal of Hubbl,which allows users to find apps based on tags rather than broad categories like “top downloaded”, “top grossing”, and “games”.

The idea makes sense, at least in theory. Looking for a good #lifelogging app? Hubbl can point you to the usual suspects like Evernote and Path but also surprises like Foodzy and EveryMove. That’s pretty good company to be in.

“Hubbl is all about context and relevancy,” Choksi said. In this case, the context is “functionality”, but Hubbl also adds a another layer of relevancy by allowing users to see what their friends have downloaded.

But here’s the big question: How do users discover an app discovery app like Hubbl? The irony of the situation isn’t lost on Choksi, who acknowledges that his product faces the same chicken-and-egg problem as every other app.

To fix this, Choksi is working on hooking the Hubbl platform into both app stores and the web, fostering the sort of organic word-of-mouth interest that most app developers can only dream of.

“We think the ubiquity of platform will help people find the app,” he said.