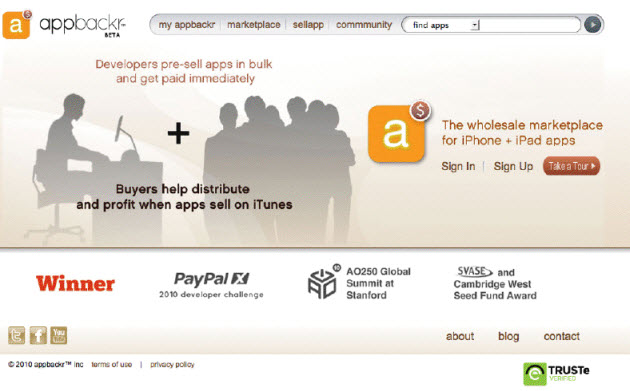 Appbackr has launched its beta version today in the hope of creating the world’s first wholesale marketplace for iPhone and iPad apps. The service would let developers submit their apps to be sold in bulk at wholesale prices.

The Palo Alto, Calif.-based company’s wholesale catalog of apps is now available to buyers. Appbackr showed off the marketplace at the DiscoveryBeat 2010 conference today. Appbackr’s wholesale buyers pay the developers immediately, and the developers can start work on new apps. Meanwhile, the developers retain control of their own intellectual property.

Appbackr is offering hundreds of dollars in incentives to early participants who offer their apps for sale during Appbackr’s first month. About 1,500 people signed up during an earlier test version of the launch. Trevor Cornwell, chief executive of Appbackr, said the company hopes to prove to this group exactly how Appbackr works and why it can be a critical part of the developer ecosystem.

Apple developers agree to sell a certain number of units to wholesale buyers at a discount. Those buyers buy the units in bulk and pay their money upfront to developers. When someone actually buys the app on iTunes, the Appbackr buyer profits, pocketing the difference between the retail price and the wholesale price. The wholesale buyer becomes an advocate of the app — Appbackr refers to these people as “backrs” — and promotes it heavily. The developer thus gets a built-in fan with a vested interest in promotion. The return of the wholesale buyer is 27 percent to 54 percent once an app sells at the retail level.

Josh Michaels, founder of iPhone developer Jetson Creative, said that Appbackr will change the way small developers think about funding and distributing their products. The wholesale business is a necessary part of any business ecosystem. It results in better funding and support for manufacturers in any industry — in this case, the equivalent of the manufacturer is an app developer. The wholesale mechanism also leads to more efficient distribution of the products and better discovery by consumers. Appbackr’s payment solution is built on top of PayPal’s applications programming interface.

Appbackr’s own financial backers are Cambridge West Ventures, Zenith Group, Silicon Valley Association of Startup Entrepreneurs, and the Hall Financial Group. Appbackr was founded in March and has 10 employees. There are no direct wholesale rivals. The company received a seed investment of $725,000 and won $50,000 from PayPal in a developer challenge contest. Cornwell previously started Embarkons, a peer financing site, and Skyjet, an online reservation system for the private airline industry. Sam Zappas and Robert Clegg are also co-founders.