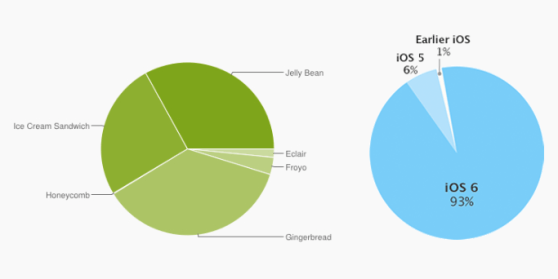 The fragmentation situations of Android and iOS couldn’t be any more different — or more embarrassing for Google.

iOS 6, for example, which appeared last year, is already on 93 percent of iOS devices, as Apple confirmed at WWDC this month. That doesn’t leave much room for iOS 5, which appears on just six percent of devices. (The one percent share of  earlier iOS versions barely registers on Apple’s chart.)

Very little of this should be surprising if you’ve paid attention to the world of Android updates. The operating system is notorious for being home to countless devices with varying degrees of support from manufacturers and carriers, which don’t have the biggest incentive to offer timely updates. While Google does a good job of keeping its Nexus devices updated, the chart above shows that most Android devices are still languishing the past. And that hurts the platform as whole.

It hurts, because it impairs the overall Android experience: App developers struggle to build apps that test and function well on every version of the Android phone, and people using apps get fed up when they don’t work well. [Editor’s note: Building a winning “mobile experience” has become core to success for many publishers and service companies. We’ll be debating this at our MobileBeat event in SF next month, where just about every major company in mobile is represented.]

The situation is very different with iOS and Apple, which not only offers new versions of the operating system to everyone on day one, but also supports those new versions for at least two years. This makes life a tad easier for iOS developers, who don’t have to worry about making sure their devices work on multiple versions of iOS.

The point, in short, is this: Google may control the larger share of the smartphone market, but Apple’s share is more up-to-date.