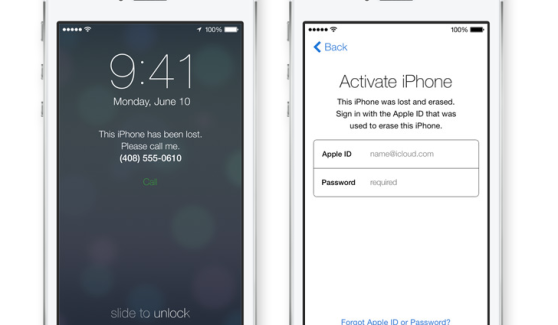 Law enforcement officials waiting for Apple to solve the iPhone theft problem finally have the feature of their dreams.

At WWDC today, Apple unveiled “activation lock,”  a new feature in iOS 7 that locks stolen phones even after thieves wipe them. The feature, which works alongside Find My iPhone, should make it much harder for iPhone thieves to use or even resell stolen phones. It’s the kill switch law enforcement has been waiting for.

“We think this is going to be a really powerful theft deterrent,” Apple software VP Craig Federighi said.

Or, as Apple puts it: “Which means your iPhone is still your iPhone. No matter where it is.”

One thing that isn’t clear, however, is how the activation lock feature will affect your ability to sell your device when you’re ready to upgrade. Will there be an online transfer process or will you have to work through Apple?

We’ve reached out to Apple for clarification on this point, but the company has yet to respond.

Another thing to keep in mind is that the efficacy of activation lock as a deterrent is directly tied to how many potential thieves know it exists. Few bad guys are going to think twice about snatching iPhones until many bad guys know that they won’t be able to sell the things afterwards. So don’t expect iPhone thefts to plummet overnight.

Of course, the other assumption here is that thieves won’t figure out a way to circumvent Apple’s new anti-theft solution, which is always a possibility. Worse, still, is what abuse of this system means for people who buy used iPhones online. Could “activation lock” be the next tool of choice for eBay and Craigslist scammers? We’ll have to see how the system works to know for sure.