When Apple and Google debuted their jointly developed COVID-19 exposure notification system, some of the underlying infrastructure was integrated into their iOS and Android operating systems, but key pieces — including receipt of actual exposure notifications — depended on geographically specific apps to be released by countries or individual states. That’s about to change somewhat when Apple releases iOS 13.7 for iPhones, partially eliminating the need for those third-party apps.

Now available in beta form for registered Apple developers, iOS 13.7 will allow users to opt into COVID-19 exposure notifications without downloading a local public health system’s app. That means participating users will be able to receive updates on potential exposure directly from iOS, but that’s only half of the system’s functionality: Users will still need to confirm their own positive diagnoses using locally offered apps, which is to say that there will be separate levels of opting in — opting in with iOS to learn if you were in a potential exposure area, and opting in with the app to share that you have COVID-19. 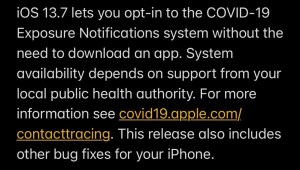 The Apple-Google joint effort has been widely praised for quickly adding a contact tracing system to the world’s most popular smartphone operating systems, but actual adoption of the system — particularly the release of compatible apps — has predictably been spotty across countries and states. It’s unclear what percentage of iOS or Android users are actually using the contact tracing system in regions where it’s supported, but health authority adoption appears to be growing, if slowly. Bluetooth wearables are set to join the system in the months to come, enabling kids and seniors to participate passively without carrying phones around.

If you’re a developer and not already running a beta of iOS 14, you can download the iOS 13.7 beta now through Apple’s software update mechanism. The update is not yet available to the general public, and no release date has been given, though a two- to four-week wait would be typical. Both iOS 13.7 and the simultaneously released iPadOS 13.7 beta also contain unspecified bug fixes and system-level improvements, all of which should carry over to their version 14 releases.